Why the book's future never happened

We now read on iPads and Kindles and Nooks. So why did the hypertext novel fail to launch? 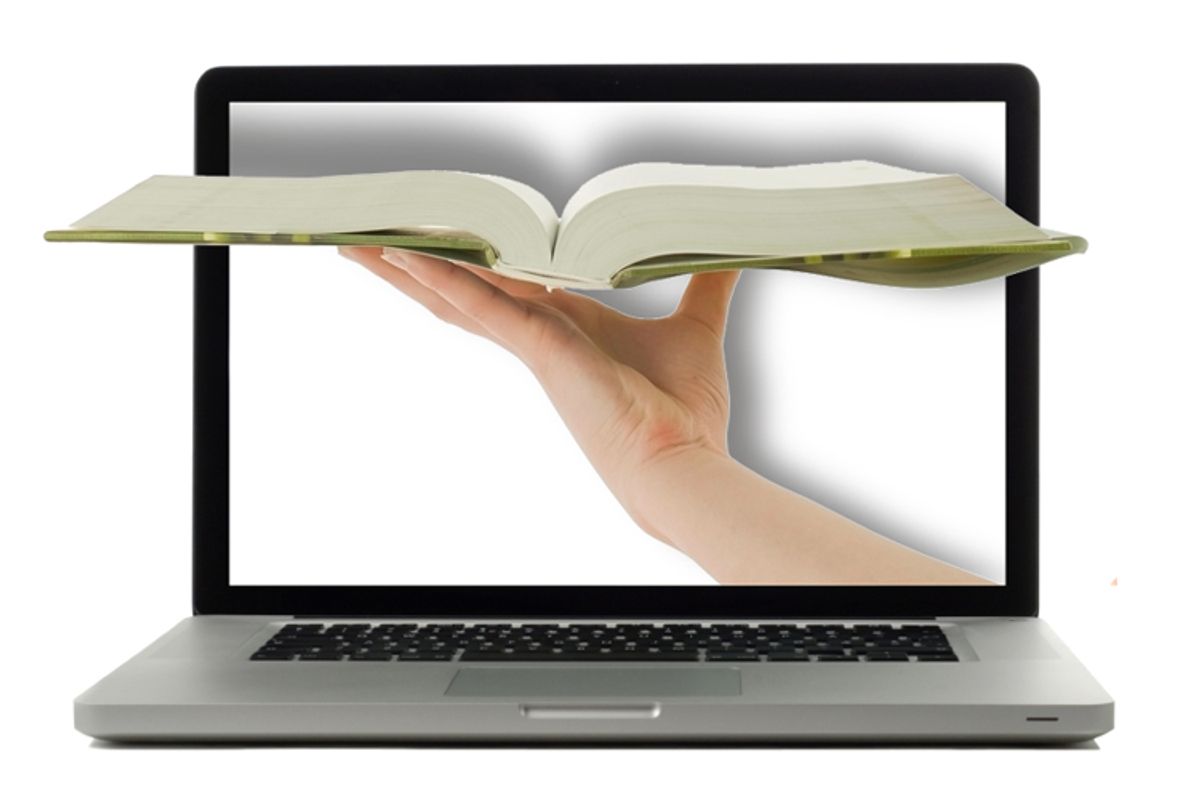 What happened to hypertext fiction? If you were alive and literate in the 1990s, you may remember the hype with which hypertext was touted as the next big thing: a medium that had the potential to transform storytelling in the post-Gutenberg era, the way the invention of movable type gave rise to the novel. Hypertexts were published, first on diskette, then on CD-ROM, then on the Web. Robert Coover’s essay about Stuart Moulthrop’s 1993 hypertext "Victory Garden" was on the front page of the New York Times Book Review.

And then ... nothing happened. The Wikipedia entry for hypertext fiction lists no works published after 2001, and although Wikipedia isn’t the final word on anything, you have to think, if someone had written a hypertext fiction, this is where they’d want to tell you about it. The form’s seeming demise is puzzling, given that the last 10 years have seen the rise of the e-book and the e-reader, lavishly animated projects like Electric Type’s Jungle Book, and innovative publishing ventures like Richard Nash’s Red Lemonade -- and, perhaps not coincidentally, a crisis in traditional book publishing. You can’t swing a cat on certain blocks of Manhattan near Union Square without it asking, “What about the future of the book?” If there was ever a time for the hypertext novel to come into its own, you’d think it would be now. But, so far, nothing. (I should mention here that I have been working on a hypertext fiction. Yes, recently. Yes, you can see. And I feel like the kid who showed up to school on a snow day -- I’m wondering, where is everybody?)

One conclusion you might draw from the recent total lack of hypertext fiction is that the genre is not viable: that the literary experiment of the '90s got what scientists would call a negative result. And in fact, if you read those fictions now (if you can read them: I’ve got a copy of "Victory Garden" on my desk, but when I try to play it, my computer tells me that "the classic environment is no longer supported," a strangely portentous phrase), they seem difficult and problematic and not encouraging of successors. For one thing, the interfaces are terrible. Michael Joyce’s "Afternoon, A Story" (1988) offers the reader short passages of monospaced text, in which some words lead to other passages, and some words don’t, and the only way to find out which words are which is to click on every word in a passage, one by one. It’s interesting in a John-Cage-like, if-it’s-boring-for-two-hours-do-it-for-four kind of way, but the appeal of endless clicking was perhaps greater in 1988 than it is now, when we click plenty at the office, thank you.

What’s more, too many of the early hypertexts relied on the novelty of their form to do literary work, particularly in the keeping-the-reader-interested department. (The same might have been true of the first bound books. Who cared what was written in your codex? Wasn’t it cool that you could turn the pages?) Here, e.g., is a passage from Moulthrop’s "Victory Garden":

Thea studied Veronica's face in the flare of a long drag. There was concern in her face tonight, along with what looked like raw weariness -- as if, this early on, she'd already been in some tight scrape. The resemblance to Emily was vivid: the same high cheekbones and long, stepped nose, the ash-blonde complexion a shade more delicate in the younger sister. Emily was the slender, elegant one driven crazy by endless comparisons to La Streep. Veronica's looks were less easily put down to type, a touch androgynous like a femme Lennon, especially in these granny glasses she'd taken to wearing.

Drilling down into the hyperlinks doesn’t yield what you think it might. "Tight scrape" takes you to a snippet of dialogue between Veronica and Thea about generational difference; "nose" drops you into the middle of a scene between Veronica and someone named Harley: another time, another place. The effect is kaleidoscopic. It’s also one of overwhelming stasis. "Victory Garden" refers several times to Jorge Luis Borges’ short story "The Garden of Forking Paths," but the spy-versus-spy intrigue that lures the reader into Borges’ dangerous garden (which, by the way, is not a hypertext: its forking paths are, like so many of Borges’ creations, only gestured at) is absent here. In its place we get snippets of description, snatches of quotation, academic conversations, and, in flashes, the first Gulf War, which is supposed to make us feel that the world has fundamentally changed, but somehow doesn’t. True, the hypertext offers you the puzzle-solving pleasure of making sense of the story, arranging the pieces in your head to see the whole mosaic, but why would you do that, if the pieces don’t suggest a picture you care to see? Not every puzzle has an interesting solution.

This is not a flaw in the medium, though; it’s a failure of craft. With two exceptions (Shelley Jackson and Geoff Ryman, whose hypertexts "Patchwork Girl" and "253," respectively, may be the first classics of the genre, both for the quality of their prose and because they found ways to make their fragmentary forms feel purposeful), the early hypertextualists just weren’t good enough writers to carry off such a difficult form. Because it is a difficult form. Hard as it is to write novels, hypertexts are harder, because you don’t have the spring-loaded crutch of linearity and "arc" to support your work; the sections have to be readable along multiple paths; they have to be richly related in multiple ways; and they have to keep you reading. It’s a tall order, but it can be done: think of Nabokov’s "Pale Fire" (1962) or Cortázar’s "Hopscotch" (1963), two great non-linear novels that were published before Ted Nelson coined the word "hypermedia." Or Laurence Sterne’s "Tristram Shandy" (1759-69), a novel written almost entirely in digressions. Or Jacques Roubaud’s heartbreaking "The Great Fire of London" (1989), a story "with interpolations and bifurcations," which chronicles Roubaud’s grief at the death of his young wife, and the failure of the "project of his existence" -- an unfinished work called "The Great Fire of London." You need six bookmarks to read it, but you can’t put it down.

Hypertext fiction is in a tough place now. Born into a world that wasn’t quite ready for it, and encumbered with lousy technology and user-hostile interface design, it got a bad reputation, at least outside of specialized reading circles. At the same time, it’s impossibly hard to create, one of the only modes of fiction I know of which is more demanding than the novel. (And then add to that the need to create a user interface, and maybe a content-management system, and is it going to be an app? Suddenly your antidepressants aren’t nearly strong enough to get you out of bed.)

It’s tempting to leave the story there, and to let the hypernovel, or whatever you want to call it, become part of the technological imagination of the past, like the flying car. But I believe that the promise of hypertext fiction is worth pursuing, even now, or maybe especially now. On the one hand, e-books are beginning to offer writers technical possibilities that, being human, we’re going to be unable to resist. On the other, the form fits with life now. So much of what we do is hyperlinked and mediated by screens that it feels important to find a way to reflect on that condition, and fiction, literature, has long afforded us the possibility of reflection. Just as the novel taught us how to be individuals, 300 years ago, by giving us a space in which to be alone, but not too alone -- a space in which to be alone with a book -- so hypertext fiction may let us try on new, non-linear identities, without dissolving us entirely into the web. It may give us room to concentrate on dispersion, to focus on distraction, and in that way, possibly, to get a sense of what we are becoming before the current sweeps us away. In the end, this isn’t a question of what hypertext can do for fiction, or for the novel; it’s a question of what fiction, and in particular the novel, can do for hypertext. Hypertext is here to stay, but the novel’s future may depend on the answer.