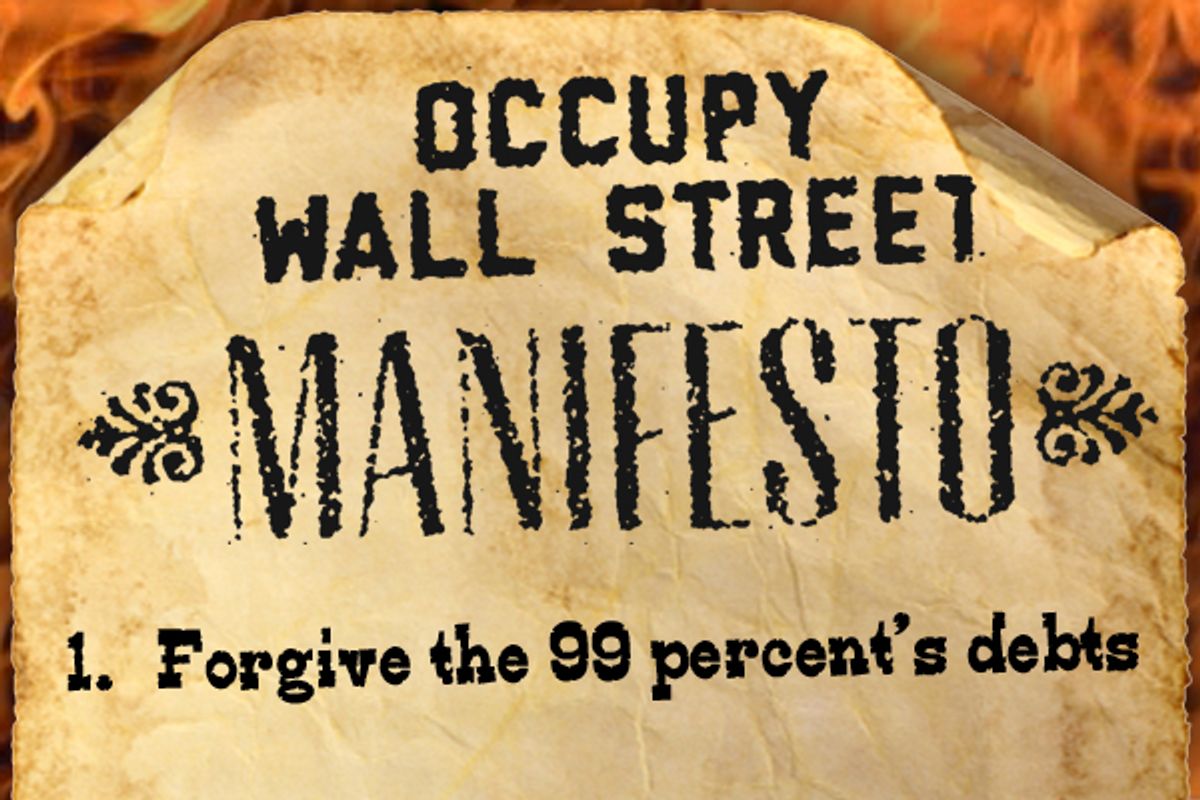 The establishment press's primary "problem" with the Occupy Wall Street protest is that those silly kids don't have a concrete demand. Or they have too many demands. Or their demands aren't realistic.

This is silly. The movement's "demand" is economic justice. Its goal is plainly to remind everyone that the bloated, obscenely profitable financial industry is sitting on vast piles of money while everyone else struggles, and to focus outrage about that situation where it belongs. Groups aligned either directly or in spirit with Occupy Wall Street have spent years issuing tons of demands (a financial transaction tax!) that the elites dismiss as unreasonable and the objective press ignores as unrealistic.

Some people have tried to step back from those demands already made and coded as "liberal" in order to find some sort of great middle ground. Matt Langer proposed two simple demands that focus on "process," and not "politics": Publicly financed elections and the elimination of paid lobbying. Noble causes, but only indirectly related to the economic injustices being highlighted and protested. (And "paid lobbying" means not just big money industry groups, but also labor, environmental and civil rights groups, and low-income advocacy organizations.)

We are probably not ever going to see the wholesale nationalization or forcible breaking up of the world's mega-banks, and whatever strict regulations we place on their actions will be weakened by future Congresses or faulty regulators.

The solution, if I may take a page from the official Washington Grown-Ups' Handbook, is tackling the national debt. Not the federal debt, though. The people's debt.

Household debt is at 90 percent of GDP. Any stimulus proposal -- even "dropping money from helicopters" -- would result in a massive transfer of money from indebted Americans to cash-engorged banks, rather than the spending spree that would theoretically put us back to work.

The original progressive movement kicked off when a bunch of very indebted people got pissed off at Wall Street. Those populists were largely farmers (and they hated the gold standard, which artificially limited the money supply) but today Americans of all stripes and occupations and backgrounds are swimming in debt of all kinds -- most of it owed to hugely profitable financial institutions that are, on the whole, better off than most of us.

The big fix then was bimetallism, leading to inflation. Inflation would probably be helpful now. But a "MORE INFLATION" demand will probably not inspire a a mass movement, especially those on a fixed income. It doesn't help that we've been trained for years to consider "inflation" a great, unmitigated evil.

So my immodest proposal is simply this: Individuals and households in the bottom 99 percent who owe debt to any large financial institution that received federal government support during and after the 2008 crisis should see their debt forgiven. That would certainly stimulate the economy, as most people would suddenly find themselves with a great deal more money to spend on iPads (and food, and clothing, and housing, and healthcare). The debt can be forgiven by decree or if the government really wants to it can step in to pay it itself; I don't much care either way. (Though it'd be nice to see it just wiped off the books, to enrage the banks.)

Let's wipe the debt of the 99 percent off the books, tell the financial sector to eat it, and get on with our lives.

I'm by no means the first person to come up with this demand. David Graeber, author of "Debt: The First 5,000 Years," proposed the idea on "Democracy Now" last month.

Even some economists have begun calling for mass debt relief. I think it's perfectly suited to both the Occupy Wall Street demonstration and the "We Are the 99 Percent" movement that's arisen from it.

Debt forgiveness has the primary benefit of uniting the members of "the 99 percent" who have been mocked by the elite press for being young college graduates (it's their own fault, we're told, for not getting business degrees or going into Wall Street themselves!) with the shrinking middle class and struggling lower classes who may have never participated in a protest in their lives, but who are largely furious with the state of the nation and the influence of the rich on the government. The "Tea Parties" may have been a conservative movement-sponsored right-wing phenomenon, but when the Tea Parties polled well for a time it was simply because plenty of non-right wing people were pissed that banks were "bailed out" and regular people weren't. So let's get on with this long overdue bailout.

A demand for mass debt forgiveness for 99 percenters is simple enough to explain in a sound bite and radical enough to appeal to the majority of Occupy Wall Street participants, from the anarchists to the liberal arts school graduates to the union workers to even the drum circle drummers. If the demand picked up mass popular support (and why wouldn't it?) to the point that that radical-sounding idea became less radical-sounding, then the movement will have accomplished more than simply shutting up and voting would have on its own. (The conservative movement didn't reorient the modern Republican Party by politely voting for whatever Republican had the best shot at winning any given election, after all.)

The problem with the proposal -- basically "moral hazard" -- is precisely the problem with the government's de facto policy of not allowing the financial industry to collapse under the weight of its colossal greed. If you believe Americans should be taught "the hard way" not to live "beyond their means," forcing credit card companies to take a haircut on the money they're owed would certainly lead them to limit consumer debt-spending in the future. Banks would rather receive regular payments from fixed-rate mortgages than trick people into ARMs if they thought the government was likely to step in on behalf of borrowers rather than lenders. In other words, forcing the financial sector to feel the pain of the rest of us would help align our interests. It would no longer be profitable to rip us off if the government stepped in to halt the Great Rip-Off.

I don't pretend to speak for Occupy Wall Street. This is simply my suggestion. But if the elites want a demand, I say give 'em a demand.