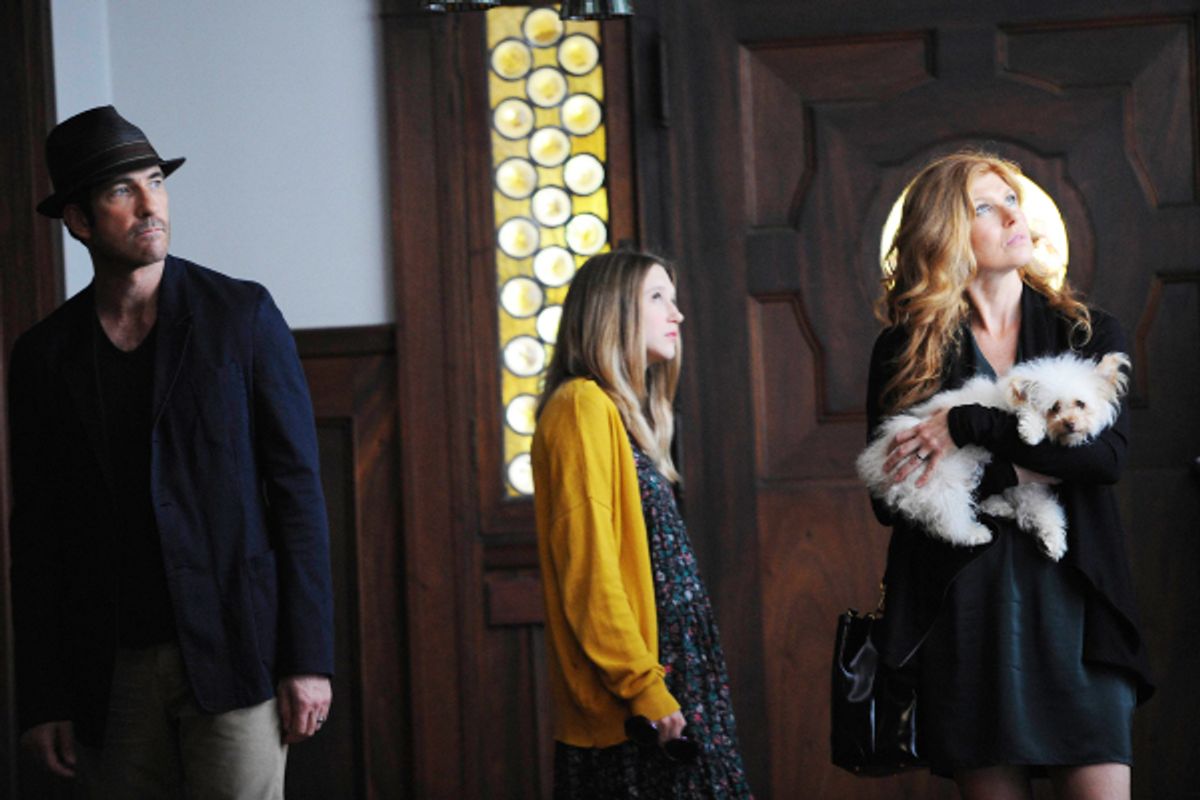 "American Horror Story" doesn't seem like the right title for this new FX series, which debuts tonight at 10 p.m./9 Central; "American Camp" might have been more accurate. It's being sold as a noveau gothic ghost story, and purely in terms of imagery in situations, that description isn't entirely misleading, but it's not quite accurate, either. Co-created by Ryan Murphy and Brad Falchuk, the show is one-stop shopping for horror tropes, ancient and recent.

The central family, the Harmons, live in a textbook haunted house -- a spacious Victorian-style L.A. mansion that was built in the 1920s and that hosted a horrific double murder-suicide. Of course it's haunted; there wouldn't be a show if it weren't. But in case that's not enough to sustain a series built around gore, shocks and spookiness, Murphy and Falchuck pile on still more unsettling elements, including "Seven"-style opening credits; a dysfunctional back story for the main couple, Vivian (Connie Britton) and her psychologist husband, Ben (Dylan McDermott); relentless, verging-on-"Carrie" bullying of the Harmons' teenage daughter Violet (Taissa Farmiga); a kooky neighbor named Constance (Jessica Lange) who came out to Hollywood to be an actress in the '60s and now runs a doggie day care center and tends to her teenage daughter Adelaide (Jamie Brewer) who has Down syndrome; time-shifted shocks that seem to allude to horrors that happened in the deep past, or that will happen in the future; and last but certainly not least, an unnerving teenage patient of Ben's (Evan Peters) who brags of murderous impulses and hallucinates bloody corpses.

The total package is closer in tone to Murphy and Falchuk's wacky/repulsive black comedy series "Nip/Tuck" than to their current Fox hit "Glee." These show runners aren't big on the idea of slowly building to a scare. They want to get right to it. The pilot's first 20 minutes alone feature a terrifying excursion into the home's basement by a couple of obnoxious twin boys, a flash-forward or flashback that ends with a bloody act of violence, a tense and ultimately upsetting encounter between Violet and a student at her new school, an unnerving incursion into the Harmon house by Adelaide and Constance, and an eerie therapy session between Ben and Tate. All the creepy, startling, repulsive and unsettling scenes might work fine on their own, but butted up against each other with little breathing space in between, the cumulative effect is numbing.

To be fair, though, I'm not convinced that "American Horror Story" aims mainly to spook viewers. It seems more of a sick comedy than a suspense story. Although it quickly sets about building a dense mythology -- one that will be further explored in next week's installment, which I think is superior to this pilot -- the predominant tone is one of knowing camp rather than creeping dread.

At times the sense of humor reminded me of another gothic-flavored Southern California domestic drama, HBO's "Six Feet Under" -- and not just because the house looks a bit like the Fisher Family mortuary, and the cast features "Six Feet" costar Frances Conroy in a prominent supporting role. The humor is of the raised eyebrow sort; it's borderline spoofy, cabaret-type riffing. Ben says his "repulsion" at the mansion's bloody back story "is tempered by the fact that this house is worth four times what we paid for it." Constance's first big scene, an insinuating face-off with Vivian, finds Lange carrying on like Bette Davis in her "Whatever Happened to Baby Jane?" phase, with awkwardly phrased line readings, bizarre body language and aggressive interruptions of her costar. Constance lovingly inspects Vivian's diamond earrings and asks if they're "real diamonds, not that Home Shopping shit," and casually refers to her daughter as "the mongoloid." "It was nice meeting you," Vivian says coolly, new neighbor code for "Get out of here now, you freak."

Where is this going? Do Murphy and Falchuk have a grand, unifying vision, or is "American Horror Story" going to be another show like "Nip/Tuck" and "Glee" -- an ambitious, tonally distinctive series that's brilliant in places but mostly inconsistent and frustrating? If past experience with these producers' output is any indication, probably the latter, but this early in the show's run, who can say? In any event, the first couple of episodes of "American Horror Story" are  more off-putting than intriguing, with a swagger that seems misplaced. I appreciate its sick, sprightly energy, but I'm already worn out by it. At its best, it's intriguingly grim, sad and bitchy. At its worst, it feels like an R-rated version of Walt Disney World's "Haunted Mansion" ride, with a new nasty puppet around each corner.