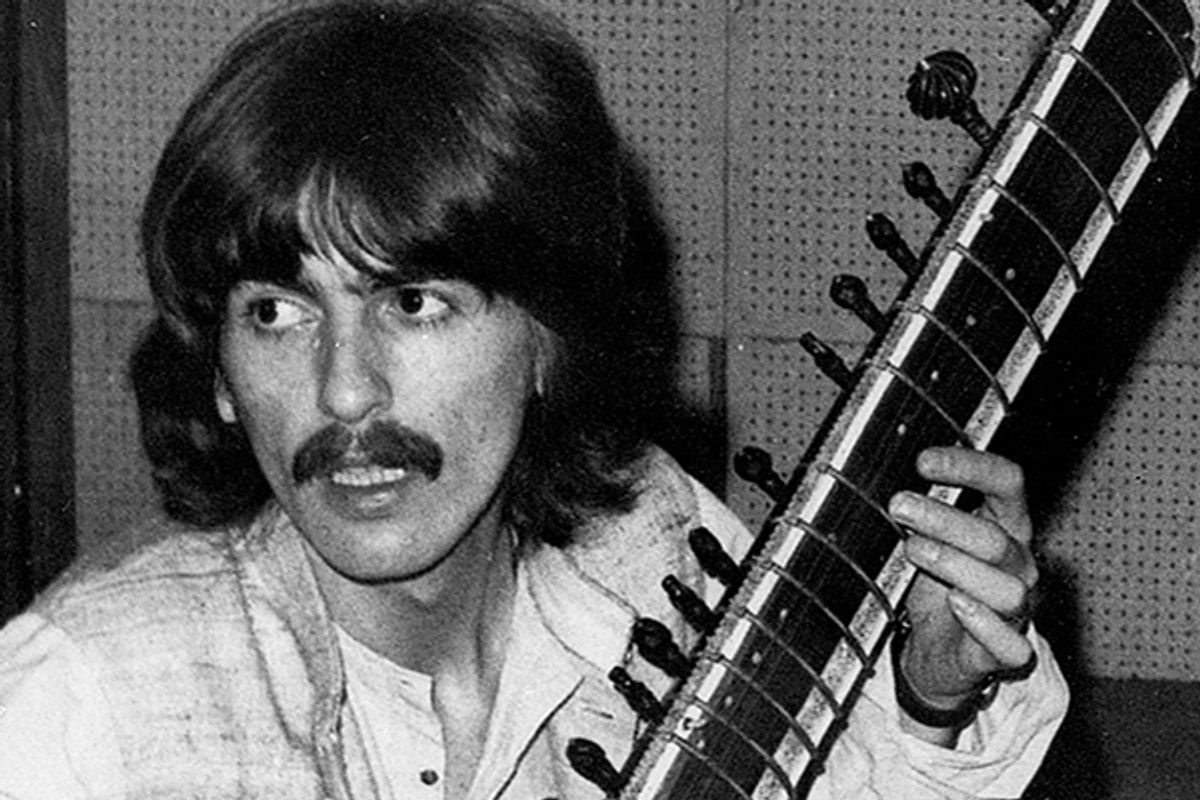 Who is your favorite Beatle? If you prize humility, generosity and gratitude -- or if you're a kid who loves the sound of his funny name --you might answer Ringo Starr. Otherwise it's probably a two-way race between Paul McCartney, who stands for sentimentality, old-school musical craft and ceaseless productivity, or John Lennon, whose name still epitomizes rebellion, sarcasm, soulfulness and martyrdom. I've rarely heard anyone answer "George Harrison," and Martin Scorsese's two-part HBO documentary "Living in the Material World" (Oct. 5 and 6, 9 p.m. Eastern, 8 Central) incidentally suggests the reasons why. Harrison was the most studious, elusive and impenetrable Beatle. And as he got older, he became increasingly uninterested in celebrity except as a vehicle that could expose him to new experiences, and bring him into contact with artists and thinkers from whom he could learn something.

George -- as I will refer to him from now on in this review, because calling the Beatles by their last names seems too formal -- was the youngest of the Beatles, but by consensus he was the most mature. From a shockingly early age, he was a student of life, cultivating the demeanor of an acolyte on an endless pilgrimage to an unknown destination. John Lennon had a questing spirit, too, but his life had a wild, often deliberately comical performance-art aspect that George's mostly lacked. Where Lennon's personal evolution was a series of diary entries that he invited the world to read, George's happened, or seemed to happen, in private. The outward evidence of whatever quest George was on (hair length, wardrobe, sitar lessons, Hare Krishna chanting) seemed mostly unconnected to his life as a public figure. He explained himself in the media only because, as one of the world's most famous men, he had to -- and because he hoped his celebrity might encourage strangers to try whatever he was excited about.

"Living in the Material World" foregrounds these qualities so pointedly that it seems to be channeling the personality of its subject. It's a problematic, at times off-putting, but ultimately fascinating work, moving through George's life with its own mysterious internal logic.

Scorsese and his brilliant editor David Tedeschi -- who also edited Scorsese's "No Direction Home," about Bob Dylan; "Shine a Light," about the Rolling Stones; and "Public Speaking," about Fran Lebowitz -- disregard many of the conventions of nonfiction films about famous artists. Sometimes the movie identifies interview subjects, other times it doesn't bother, and there's no obvious reason why it does or doesn't. It mixes new interviews and never-before-seen material from George's personal archive (including off-the-cuff shots of the Beatles cavorting all over the world, and home-movie footage of George's very first sitar lesson from Ravi Shankar) with expected, familiar stuff, but very little of it is identified by date or location. There are interviews with record producer and convicted murderer Phil Spector, who produced the Beatles' "Let it Be" and several Beatles solo albums, including "All Things Must Pass"; presumably these were conducted right before he went to prison (he seems awfully peppy and untroubled), but there's no easy way to tell.

Sometimes the film's lack of specificity seems artistically justified; for example, the long opening montage of shots of World War II and postwar England are haunting and lovely and require no explication, as any Beatles fan knows that John, Paul, George and Ringo were children of that time and place. But other times the film's contents seem erratic and disorganized. Near the end of Part 1, for instance, there's a snippet of a British newscaster announcing the 1970 breakup of the Beatles, but the rest of Part 1 and the start of Part 2 cover events that occurred in the two years before the breakup; because the movie unfolds in a more or less linear way up till then, it feels almost like an editing mistake. Considering Scorsese's typically obsessive attitude toward history, one has to assume these are deliberate artistic choices. But what's the thinking behind them -- that in this story, journalistic housekeeping isn't important? Maybe in the greater scheme of things it isn't, but it matters to history buffs, and to anyone who likes to keep a documentary's timeline straight.

The film's choices of what to emphasize, minimize and ignore will surely frustrate some Beatles fans. "Living in the Material World" devotes plenty of screen time to George's fascination with Eastern religion, the production of his masterful 1970 solo debut "All Things Must Pass," his founding of the influential independent production company HandMade Films, and the 1971 concert that he and Shankar masterminded to benefit cyclone-and-war-battered Bangladesh. But it tells us little about George's cultural roots or the impact of his family and community on his personality. And it mostly glosses over his troubled first marriage to Pattie Boyd Harrison, except to note her tempestuous affair with George's close friend and musical collaborator Eric Clapton -- a relationship that inspired Clapton to write "Layla," a song prominently featured in Scorsese's gangster epic "GoodFellas" alongside George's magnificent "What Is Life." (George's second wife, Olivia, is credited as a co-producer on "Living in the Material World" and gave Scorsese a lot of of the footage used in the project; maybe this explains the near-absence of Pattie?)

The film's editing rhythms are distinctive, bordering on peculiar, especially its treatment of George's music. Sometimes Scorsese and Tedeschi will let a song play out for much longer than most modern documentaries dare, letting us actually listen to the music while the screen shows silent footage of George, the Beatles or other significant figures. The effect is transporting, almost meditative; the approach befits the Beatle who was most dedicated to transcendentalism, and who introduced many fellow Westerners to the transformational power of chanting. But then the song will abruptly cut off instead of slowly fading, and drop us right into an interview with a new historical witness who hasn't been properly introduced. The effect is like getting lost in a blissful trance, then having some interloper shatter it. It's a style choice, and not an inherently bad one, because it feels like an attempt to reflect George's struggle to find inner peace in a world that continually bombarded him with distractions. But it takes some getting used to, and sometimes feels like an affectation.

My viewing notes on "Living in the Material World" are filled with such phrases as, "Why would they do this?" and "Odd choice" and "Doesn't work -- or does it?" But such reactions are appropriate for the subject. George was an experimenter whose whole adult life was defined by a willingness to try new things without worrying whether they were going to pay off in the long run; indeed, phrases like "Pay off in the long run" seem entirely inappropriate to a discussion of George as a musician and a person. By the time that "Living in the Material World" finally draws to a close, we've gained some insight into George's life, work and evolution, yet he remains a question mark. Most of the witnesses admit that although they knew George, they never really knew George. The filmmakers respect this verdict, just as they respected the enigma of Bob Dylan in the "American Masters" documentary "No Direction Home." Scorsese is obviously more interested in George's work than his personal life, except in those cases where the personal life is so dramatic, and so intimately connected to his work, that avoiding it would amount to gross negligence.

At the same time, though -- and this is the film's single finest quality -- "Living in the Material World" grants George's spiritual questing a weight that's equal to, in some ways greater than, what he accomplished as a singer, songwriter, recording engineer and public figure. The film points out that nearly all of Harrison's greatest songs -- not just "Living in the Material World," "What Is Life," "My Sweet Lord," "Beware of Darkness" and other post-Beatles works, but "Here Comes the Sun," "Something" and "While My Guitar Gently Weeps" as well -- were ultimately not about George's relationships with friends, lovers or spouses, but his attempts to understand God. The section about the creation of George's epic three-record set "All Things Must Pass" -- the greatest of all Beatles solo albums -- is the heart of the documentary, a stirring account of a young musician's evolution to a higher artistic and spiritual plane. The devotion with which this documentary depicts George's religious impulse -- his ceaseless attempt, from adolescence onward, to get outside of himself -- is admirable and moving. It's a necessary corrective to the popular perception of George and so many other '60s musicians as slaves to fashion, people who were just "into" non-Western religion and culture because it was what people did back then, and who couldn't possibly have been "serious" about any of it -- as if non-Western culture's effect on the West isn't a fascinating subject in itself, and as if a gesture toward changing one's consciousness is only worth making if it sticks.

Glancing through my own obsessive collection of Beatles books, I'm struck by how often biographers diminished the spiritual quests of the Beatles and other 1960s pop culture icons as "experiments" or "flirtations" or "forays" -- as if the very idea of a rich and famous artist worrying about his soul, and the possibility of a life beyond the material plane, is laughable, or at least worthy of suspicion. Western civilization resists the idea that life is not about success or failure, but simply experience, and it's deeply hostile to the concept of a non-material world, a realm beyond the senses that's illuminated by the title of another George song called "The Inner Light." "A lot of people are going to hate me because they fear the unknown, you see?" George tells an interviewer. George didn't fear the unknown; he embraced it.