If policing Occupy Wall Street is too expensive, why not save money by not illegally spying on Muslims? 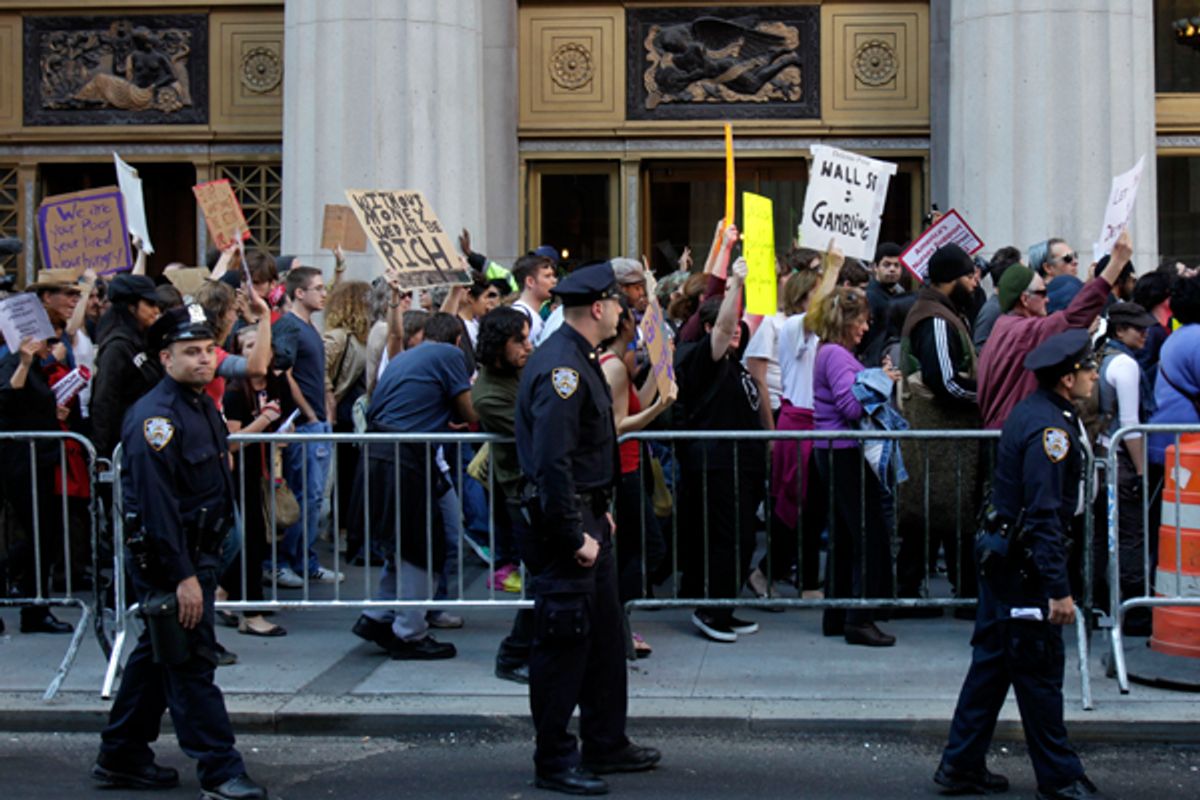 When the NYPD arrested hundreds of people participating in the Occupy Wall Street demonstration last weekend, in an echo of their illegal arrests during the 2004 Republican National Convention, the movement actually grew in size and scope, with thousands of people today participating and more to join later this week. The usual "sweep the hippies into jail because no one cares" strategy did not really work, this time. So here's the next tactic, which I imagine you'll be seeing in the Post (and probably the Daily News!) soon: The city will have to move against Occupy Wall Street because it's too expensive to allow them to continue.

"This is costing a lot of money, at a time when we are being warned that we may face revenge attacks from al-Qaida because of our recent drone strike,” said Councilman Peter Vallone of Queens.

Vallone, chair of the Public Safety Committee, said he'll be asking for an accounting at the end of it all.

"We're going to spend hundreds of thousands, maybe even $1 million on this that we don't have. Because of these protests, we might even wind up shutting down schools and firehouses because this is costing a lot of money." Vallone said.

You monsters are going to shut down schools, by peacefully demonstrating while monitored by a small army of heavily armed police officers (not counting the undercover officers surely out "protesting" amongst you right now).

Vallone told Justin Elliott that the mayor should decide when to "limit" the protests (sweep everyone into jail, which will surely also be expensive) in order to save some cash, but I think the NYPD could probably find a bit of extra money if they shut down their vast, international and questionably legal intelligence-gathering and racial profiling-based spying network? You know, the one the AP has been reporting on brilliantly for a few weeks now?

I bet the NYPD would save a lot of money if it didn't attempt to extensively track the movements of every Muslim person in the city, for one thing. Like the undercover officer assigned "to monitor a prominent Muslim leader even as he decried terrorism, cooperated with the police, dined with Mayor Michael Bloomberg and was the subject of a Pulitzer Prize-winning series by The New York Times about Muslims in America."

The FBI had no interest in Sheikh Reda Shata, because he is a moderate man of peace, but the NYPD thought he was a very serious threat:

Police assigned an undercover officer and an informant to watch Shata personally, and two others were assigned to watch his mosque, according to the NYPD files. Mark Mershon, the FBI's senior agent in New York in 2006, said he has no recollection of Shata ever being under FBI investigation.

You know what would be a good way to "radicalize" moderate American Muslims? To constantly spy on them, secretly record their every move, and suspect them without cause of aiding terrorists, all while lying to their faces about the NYPD not engaging in profiling, as Commissioner Ray Kelly did while addressing a mosque under NYPD surveillance last year.

So if Occupy Wall Street is costing the city too much money to police, I recommend they cut back a bit on expensive violations of our civil liberties.