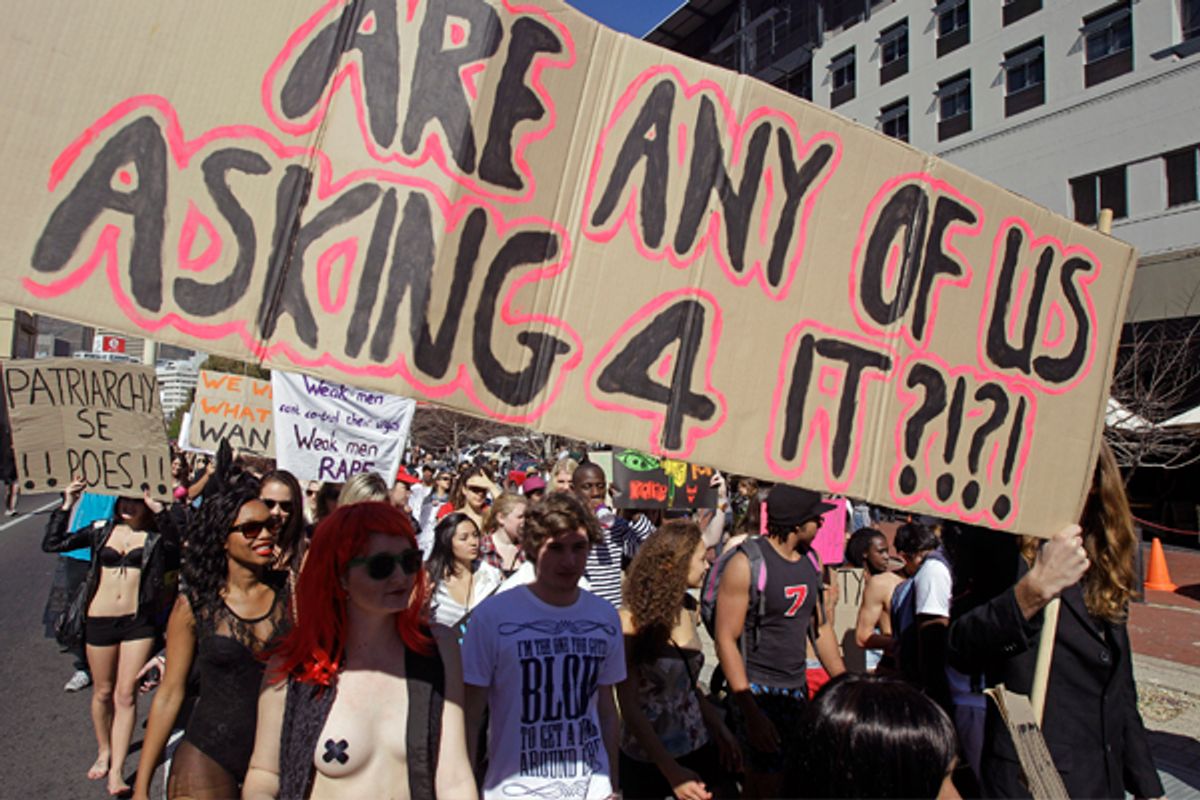 CAPE TOWN, South Africa -- Just as Nono was beginning to understand her lesbian sexual identity at the age of 18, a male cousin began to rape her.

Before the first attack, he admonished, "Now I am going to teach you how to be a lady." He threatened to kill her if she told anyone.

Nono, who has asked that her last name not be used, learned two years ago that her cousin had been shot and killed in an unrelated incident.

Nono said she never reported her abuse to police. She belongs to a silent majority of gay South African women who have been victimized by "corrective rape," a controversial term describing the practice of straight men raping lesbians to "correct" their sexual orientation.

This year a series of highly publicized attacks in Pretoria, Cape Town and the Johannesburg area -- including the rape and murder of lesbian activist Noxolo Nogwaza in the same township where national women's soccer team captain Eudy Simelane was killed in 2008 -- have pushed "corrective rape" back into the headlines and spurred the South African government to convene an interim task force on gender-based violence and to establish another task force to draft hate crimes legislation.

And critically, an increasing number of victimized women are stepping forward and banding together to assert their right to be safe in their communities.

"We have won so many rights to love more freely, but it hasn't protected our bodily integrity," said Melanie Judge, a lesbian activist, social commentator and executive committee member of the Coalition for African Lesbians.

Danger in the "rainbow nation"

South Africa is at once the best places in the world -- and one of the worst -- to be gay. It offers comprehensive official rights rooted in the struggle to overthrow apartheid, with one of the most progressive constitutions in the world. But the ongoing threat of "corrective rape," part of a pervasive and well-documented pattern of sexual violence against women and children, demonstrates that the reality on the ground conflicts with that progressive ideology. According to two national studies conducted in 2010, one in three women surveyed had been raped in the past year and one in four men admitted to committing rape in their lifetimes.

The statistics on "corrective rape" are extremely difficult to document, though activists and researchers agree reported cases appear to be on the rise as more lesbian women break their silence and report their attacks to police. There may also be a 'copycat effect' occurring, said Dipika Nath, a researcher for Human Rights Watch's Lesbian, Gay, Bisexual and Transgender Program.

"As news of attacks spread, people may get inspired or learn to do the same in their communities," she said.

Media outlets around the world have reported that up to 10 lesbians a week are raped in Cape Town alone. But Nath adamantly refutes the number, saying "there is no evidence anywhere" to support it. The lack of solid statistics has led to a conflating of "corrective rape" with all forms of violence against lesbians and to the reporting of sensational and unsubstantiated claims about the extent of the problem, reported the Office of the High Commissioner for Human Rights last June.

"Rape is rape," said Bulelwa Panda, manager of iThemba Lam, a Christian center for reconciliation and healing that operates a safe house for LGBT people in Oliver Tambo Village outside Cape Town. "It doesn't matter if you're gay or straight. At the end of the day, you're a woman."

Organizations like Luleki Sizwe, a Cape Town non-profit organized to fight violence against lesbians, have focused their attention specifically on the problem of "corrective rape." Last year the group started an online petition on Change.org that garnered 170,000 signatures from activists around the world. The petition along with protests and pressure from other gay rights groups motivated the government to partner with the organization last June to appoint an interim task force on gender-based violence.

The organization has lobbied strenuously on behalf of Noxolo Nkosana, a lesbian stabbed four times in June in Cape Town's Crossroads township.

"They deserve a second circumcision," she said of her sister's attackers.

Speaking about her sister's orientation, Stamper said, "We are proud she is a lesbian...I want to say to all the lesbians and gays that I am supporting them 100 percent even though I'm straight."

A legacy of violence

Cape Town is the site of Zoliswa Nkonyana murder case, one of at least five court cases nationwide involving the sexual and physical assaults of lesbians that Human Rights Watch is monitoring. The 19-year-old lesbian was clubbed, kicked and beaten to death in Khalyelitsha township in 2006. Last month, two of the nine men accused of killing Nkonyana were acquitted much to the outrage of LGBT activists who have championed the case; verdicts against the remaining seven men will be announced on Friday.

A week after the acquittals in the Nkonyana case were announced, the decomposed body of 21-year-old Nontsikelelo Tyatyeka was discovered in a garbage bin in Nyanga township. Missing since September 2010, one of the young lesbian's neighbors called the motive for her violent death "nothing but homophobia," and police suspect a 29-year-old neighbor in the killing.

The homophobic violence LGBT people face in South Africa stands in stark contrast to the comprehensive legal rights and protections accorded them in their country's constitution, which took effect in 1997.

Those rights are rooted in the struggle to overthrow apartheid, and the violence in the legacy of apartheid. "We are terribly violent as a culture," said the activist Melanie Judge, who co-edited To Have and To Hold: The Making of Same Sex Marriage in South Africa. "That is one of the most horrific scars of apartheid. A violent system begat a violent population."

The successful mass movement to abolish apartheid was built on a vision of a society based on equality. South Africa's post-apartheid constitution was the first in the world to outlaw discrimination on the basis of sexual orientation; in addition a host of laws were enacted forbidding discrimination in the work place, public accommodations and services. In 2006, South Africa became only the fifth country in the world, and the only country in Africa, to legalize same-sex marriage.

However, translating these rights into reality for the majority of South Africa's gay citizens has been difficult in part because homosexuality is widely seen as alien to the religious beliefs and cultural norms of South Africa, which remains a largely conservative society.

"We are treated like we are not expected to be in this world," said Ndumie Funda, founder of Luleki Sizwe.

Nono said that although she could be open about her sexual orientation with the family she served as a domestic worker, several of her own family members shun her because she is a lesbian. Recently she was refused a spot at the common table during the funeral of a family elder.

Yet, Nono says, she always "dresses like a lady" when she goes to see them.

In the vast, low-lying area southeast of downtown Cape Town known as the Cape Flats, black Africans and mixed race, or "Coloured," people were forced to live in segregated townships during apartheid. iThemba Lam works there in partnership with the Inclusive and Affirming Ministries and the Department of Social Services to establish a safe haven for gay people and to educate straight people about homosexuality.

iThemba Lam's Panda, who was born and raised in Guguletu township, routinely counsels young lesbians and gay men about coming out in townships. "I tell them you have to equip yourself before you come out because the minute you do there will be consequences," she said.

Those most at risk of violence are black African "lesbian and bisexual women, effeminate gay men and transgender persons who choose to live their lives [openly] in extremely homophobic and violent communities, specifically in township and rural communities," said Marlow Newman-Valentine, deputy director of the Triangle Project, a Cape Town non-profit serving the LGBT community in the Western Cape province.

People must learn to ignore verbal abuse and to never walk alone at night; most importantly, people must learn where it is and is not safe for them to go and to devise strategies to navigate these places. Panda says she avoids certain townships as much as possible and, when she can't she is careful to never travel to them via the same route to avoid attracting attention.

When the house first opened in 2008, some neighbors threatened to burn it down. Now it shares its facilities with the local community, which operates a soup kitchen out of a small room at the back of the house.

Nono recently sought temporary shelter at iThembo Lam after losing her job. Like Panda, she was born and raised in Guguletu and has lived in the Cape Flats all her life. She said the only place she's felt completely safe is in the neighborhood where the safe house is located.

Because her family was dependent on her cousin's family to make ends meet, no one in either family interceded on her behalf until she became pregnant five months later. Her child's father is her cousin.

She describes being "scared of my own child" whom her family sent to live with relatives when she was an infant. Now 11, the child has never been told who her parents are. The child knows Nono only as her cousin, and not as her mother. Nono said she would like to tell her daughter that she is her mother but "this would mean I must also tell her that her father rapes me and that he was my cousin."

There have been reports of families knowingly enlisting men to rape their lesbian relatives to "correct" their sexual orientation. When asked if she believed this is what happened to her, Nono fell silent for a moment before replying: "I can't say. My mother dies a few years ago and I never asked her. So I still have this question."