As homophobia declines, some heterosexual boys are getting cozier and telling each other, \"I love you, dude\" 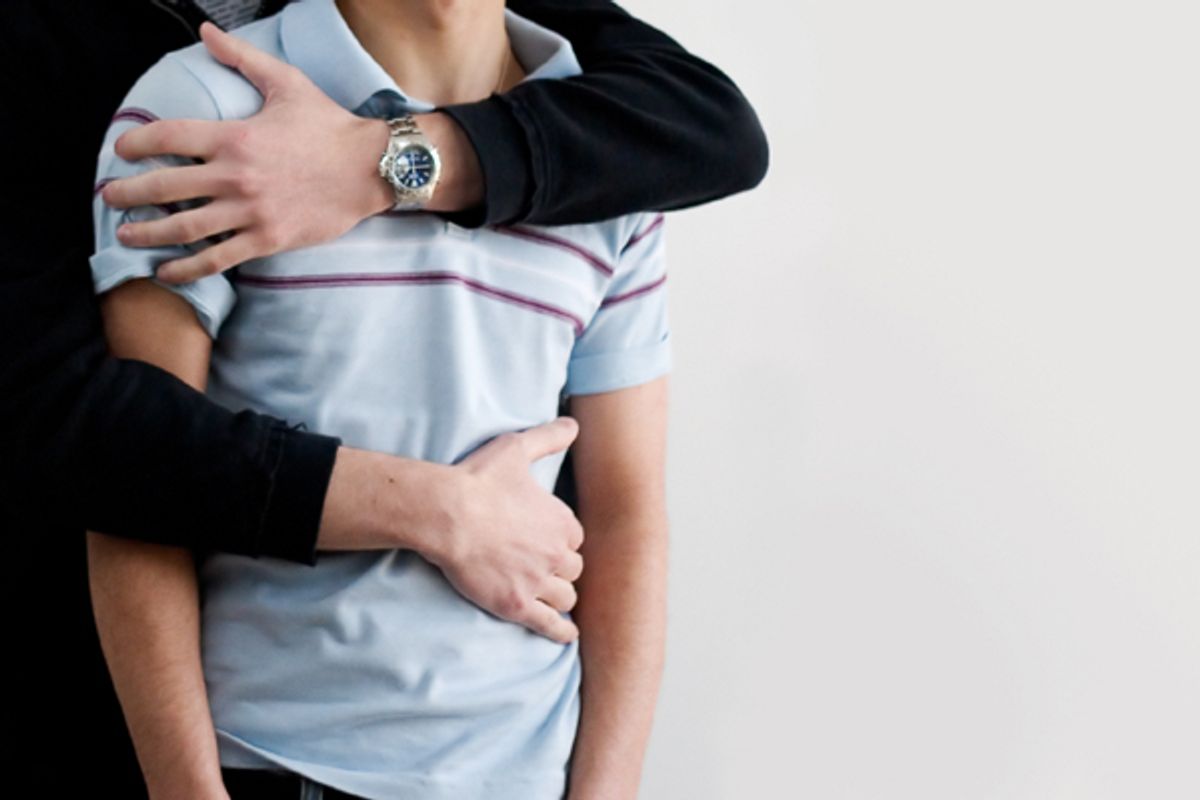 It starts with "John" hugging "Leo" tightly. Then, a few snapshots into the Facebook photo album, the baby-faced 16-year-old softly kisses his friend on the cheek. It culminates with a shot of the British teens holding up their shirts to reveal their tanned, washboard stomachs and the elastic waistbands of their designer underwear. On the boys' respective profiles they leave each other comments reading, "I love you," sometimes in all-caps, along with teeny-tiny heart icons.

These may seem like startling displays of same-sex affection and innuendo for a pair of heterosexual teenage boys -- even despite their blow-dried Justin Bieber bangs -- but Eric Anderson, an American sociologist, says it's part of a larger trend among teens and young adults.

"It is normal in the United Kingdom for young straight boys to sleep in the same bed, frequently, and to cuddle," says Anderson, who has primarily focused his research on white males living above the poverty line. In a recent study, he found that 90 percent of heterosexual undergraduate men in the U.K. had at least once kissed a straight male friend on the lips. Things are not so fluid in the U.S. -- he found 7 percent of heterosexual college guys had smooched a straight male pal -- but his in-depth studies of American jocks and frat boys, those expected to be the most homophobic, have revealed them to be increasingly comfortable with same-sex physical and emotional intimacy, he says.

His hypothesis runs counter to a New York Times piece just over a week ago about how boys are discouraged from having intimate friendships. It also seems to blatantly contradict recent headlines about bullied gay teens committing suicide. Anderson, author of "Inclusive Masculinity: The Changing Nature of Masculinities" along with two other academic books about male sexuality, says it's remarkable that these news stories even exist -- it used to be that families would be too ashamed to admit that their child was a homosexual. Nowadays, it's typically "extreme femininity" that's being targeted: "It's more femme-phobia than it is homophobia," he claims. As homophobia continues to decrease at a rapid rate, "boys don't have to align their behavior with extreme masculinity -- they can move much closer toward femininity."

It's certainly true that the concept of "metrosexuality" loosened up mainstream understandings of male straightness in the '90s, and the past decade introduced the "bromance" into our cultural lexicon with movies like "I Love You, Man." These are signs of progress, to be sure, but they still reek of defensive heterosexuality. Take the "no homo" meme where guys say something "gay" like, "Hey man, nice shoes," followed by the caveat "no homo."

Anderson tells me that no stats will convince me of this trend better than talking to some of these boys myself, so he introduces me to John, the British 16-year-old. He gamely tells me via Facebook chat about his relationship with Leo: "i'll hug him, kiss on the cheek; anything! we're so close, we genuinely don't care what other people think," he writes. "i'm very confident and comfortable with my sexuality." So much so that he almost seems baffled by my questions about further sexual experimentation with Leo: "nope, never happened haha!" It isn't about sex, he says. They just love each other as friends and aren't afraid to show it. As John writes on Leo's profile, "I genuinely love you an extraordinary amount, for a straight sixteen year old male. In conclusion, you are also my best friend."

Now, lest you think these boys are all sugar and spice, they also call each other "cunts" and "wankers." They are football fanatics and hardcore fans of Lil' Wayne (who can hardly expect any awards from GLAAD after penning lyrics like, "You homo niggas getting AIDS in the ass"); Leo even fancies himself a white rapper. A Facebook status update from John reads, "love walking down the road to college with your trousers round your ankles, just to gain man points." So they don't lack stereotypically masculine credentials, and their declarations of love sometimes seem so over the top as to be tongue-in-cheek, maybe even a way to preempt being attacked as gay. Still, formerly strict boundaries are being crossed -- and frequently, playfully.

Things are much different stateside. In yearly surveys of young men on either side of the pond,  Anderson has consistently found that the U.S. ranks 25 percentage points higher on homophobia. Why the difference? "The primary reason for a lag between what occurs in the U.K. versus the U.S. is American religious fundamentalism," Anderson explains. "The U.K. has long-divorced themselves of this." Aside from religious fundamentalism, there is also the fact that "we shelter our teenagers in America from sex, drugs and alcohol until they're 18 or 21," he says. "In the United Kingdom, it's legal to drink at 18, but 15- and 16-year-olds are going to parties and getting smashed and nobody cares."

Anderson puts me in touch with Jordan, a straight 17-year-old cross-country runner from Southern California who paints a subtler portrait of change. He's never seen someone at his high school called "gay" for actually being gay -- but it's still used as slang for "lame." (Anderson says, "Adolescents are just as adept in knowing whether one means 'gay' or 'gay,' just as they do 'duck' or 'duck.'") Jordan has told his best friends "I love you, dude" before and his teammates horse around in familiar sportsman fashion (hugs and ass-slaps are common) – but it stops there. "We don't ever kiss. I think that would be weird, to be honest." The craziest things Jordan reports are the time his team had a pillow fight -- "a whole 15 guys having a pillow fight, that would seem pretty gay to me" -- and when they stayed in a hotel for a competition and "had a huge jacuzzi tub and we all went in together."

In junior high, he worried a lot about people thinking he was gay because he liked to dress nicely; he was the first guy to wear a v-neck to his school. "I am metro, I guess. I care about what I wear, what I look like and it seems nowadays it's more acceptable to be like that," says Jordon, who has the angular bone structure of a leading man and recently got into modeling. His Facebook profile is strewn with glossy head shots from professional photo shoots and some of his guy friends even weigh in to tell him that he's looking good. "I'm sure people still think I'm gay, but to be honest it doesn't bother me anymore 'cause I know who I am."

Anderson says his findings should be taken as tremendously positive news, and "not just because they indicate a better lived experience for male sexual minorities." He explains, "It used to be that male adolescents -- too old to cuddle or emote with their parents but without having a girlfriend -- were alienated from this type of human affection and interaction." Now, a single 16-year-old "receives cuddles and love from his mate, drunk or sober," at least in the U.K., and can "open up about his fears and anxieties, his weaknesses and failures in a way that men from my generation" -- he's in his 40s -- "will read and absolutely disbelieve."

It's hard to believe even for someone like myself who is just a decade older than John and Jordan and grew up in one of the most liberal, gay-friendly cities in America. There is no question that homophobia has decreased dramatically -- support for same-sex marriage is skyrocketing, even among fundamentalist Christians, and never before have gay celebrities enjoyed such visibility and respect -- but these achievements are precarious and certainly not universally enjoyed. Take the suicide of 14-year-old Jamey Rodemeyer, a gay teen who was called a "fag" and teased for being an effeminate Lady Gaga fan. He filmed a video for Dan Savage's "It Gets Better" campaign, just months before hanging himself outside of his family home in Buffalo, N.Y.  He looked into the camera and said: "It gets better -- I mean, look at me, I'm doing fine!"

It's true, it does gets better, and as a society we're getting better -- but we aren't there yet.