The odds are a changin', but that's a cheap publicity stunt, not reality. Here's why Dylan doesn't stand a chance 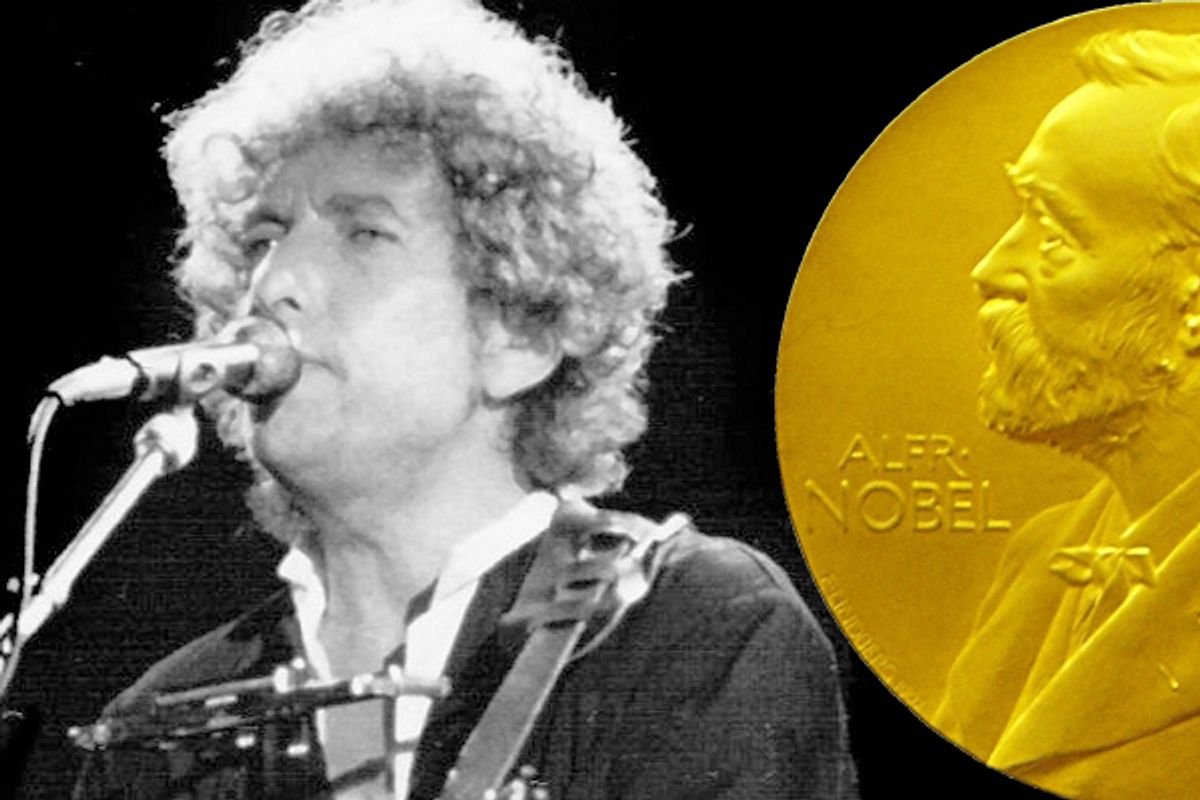 According to the British bookies at Ladbrokes, Bob Dylan is suddenly a 5-1  choice to capture the Nobel Prize for literature when the Swedish Academy awards the annual honor Thursday in Stockholm.

A dark horse just a few days ago, Dylan has pulled ahead of Adonis, the Syrian poet and one-time Nobel favorite, and is now a far safer bet than fellow Americans Thomas Pynchon and Philip Roth. As one handicapper told the Guardian this week, "At first we had him down as a rank outsider but the committee have been known to spring a shock and punters the world over feel Dylan will be the beneficiary."

Alas, something is happening here and the punters don’t know what it is. Bob Dylan is not going to win the Nobel, at least not in the foreseeable future. Here are five reasons why:

Members of the prize committee -- "the eighteen," as they’re known -- have become famous for their devotion to the unheralded. As Kjell Espmark, a member of the Swedish Academy recently told a German media outlet, the committee once chose winners in part "because they wrote bestsellers." But, he added, "After World War II, however, they favored forward thinkers like Hermann Hesse, Andre Gide, T.S. Eliot and William Faulkner -- and then in the ‘70s it was about shedding light on unknown masters."

Though the panel has recently cited known quantities like V.S. Naipaul (’01), J.M Coetzee (’03) and, last year, Mario Vargas Llosa, the prize often goes to a lesser-known writer. Since 2000, the list of laureates has included Chinese novelist Gao Xingjian (2000), Austrian novelist and playwright Elfriede Jelinek (’04) and French novelist J.M.G. Le Clezio (’08). Even Swedish Academy members have been known to chafe at the committee’s self-conscious bias for the unconventional; one panelist quit the Academy in protest of the prize awarded to Jelinek, describing her prose as ''a mass of text shoveled together, without artistic structure." If voters want an avant-gardist, they won’t be looking Dylan’s way.

He has enough awards.

In 2008, Dylan received an honorary Pulitzer for what the prize committee termed his "profound impact on popular music and American culture, marked by lyrical compositions of extraordinary poetic power." There’s no way in hell that the Nobel committee, which prides itself on celebrating the underappreciated, is going to play second fiddle to the Pulitzers (not to mention the Grammys, the Oscars or the Golden Globes).

He’s not as overtly political as he once was.

"Oh Mercy," Dylan’s 1989 album, begins with the words: "We live in a political world." Dylan once did, too. Though he began renouncing the notion that he was a protest singer as early as 1964, he continued to write about social concerns for decades thereafter. Songs like "Hurricane," his 1975 ballad about a boxer imprisoned on flimsy evidence, and "Neighborhood Bully," his 1983 rallying cry for Israel, are just two of scores of Dylan compositions from this era that were simultaneously provocative and entertaining.

But in recent years Dylan the lyricist has turned inward. In 2006, when he interviewed the singer for Rolling Stone, novelist Jonathan Lethem remarked upon Dylan’s evolution from that of a songwriter with explicit social concerns to one who "seems to survey a broken world through the prism of a heart that’s worn and worldly, yet decidedly unbroken itself." Lethem added, "This isn’t to say 'Modern Times,' or Dylan, seems oblivious to the present moment. The record is littered -- or should I say baited? -- with glinting references to world events like 9/11 and Hurricane Katrina.

Meanwhile, the closest "Together Through Life" -- his last non-Christmas studio album, it came out in 2009 -- gets to politics is "It’s All Good." The song compares a "(b)ig politician telling lies" and a "(r)estaurant kitchen, all full of flies," concluding: "Don't make a bit of difference, don't see why it should." It’s safe to assume that lyrics like these are meant to be at least somewhat ironic -- but the Nobel folks don’t really do irony. They’re more into "cartography of structures of power" and "explorer(s) of a humanity beyond and below the reigning civilization."

He’s from the wrong country.

Here’s the list of Nobel Lit winners. Not many Americans there.

He’s in the news for the wrong reason.

Just this week we learned that a Nobel Prize for medicine went to a scientist who had died four days earlier. Because Nobels aren’t awarded posthumously, his death technically disqualified Dr. Ralph M. Steinman as a candidate. But the committee let the decision stand because they were not aware that he had succumbed to cancer. This means that Nobel committees are forced to be at least somewhat aware of current events, and this latest round of Bob Dylan-is-an-artistic-thief accusations can’t help his candidacy. For those who missed it: Dylan is showing a bunch of his paintings at a prestigious New York City gallery, and some observers have noted that the images are quite similar to well-known photographs by Henri Cartier-Bresson and others. This isn’t the only time Dylan has been accused of appropriating the work of other artists. Let’s be clear: Bob Dylan is not a plagiarist. The allegations seem like nonsense. But in a year in which Dylan was also criticized for playing shows in repressive China, they’re not going to help him win the Nobel.