Your favorite author, brought to you by a wealthy patron

As copyright erodes and the book industry changes, a combination of Kickstarter and the rich might fund writers 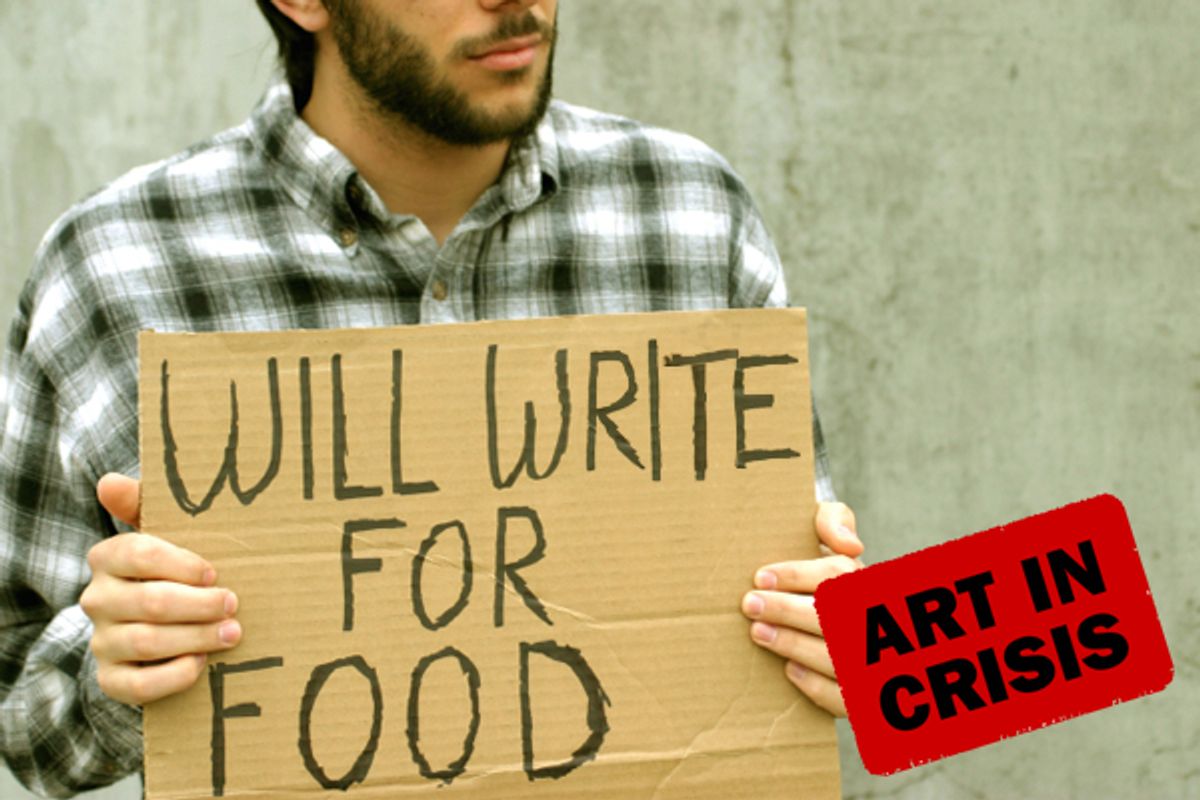 A passage from Stephen Greenblatt's new book, "Swerve," on Renaissance book culture, has this to say about how writers paid their bills several centuries ago:

Authors made nothing from the sale of their books; their profits derived from the wealthy patron to whom the work was dedicated. (The arrangement -- which helps to account for the fulsome flattery of dedicatory epistles -- seems odd to us, but it had an impressive stability, remaining in place until the invention of copyright in the 18th century.)

We're so accustomed to thinking of copyright as the foundation of a writer's livelihood that it's difficult to imagine how authors could survive without it. Yet we may need to start doing just that.

Our current copyright laws and (often ham-fisted) attempts to enforce them have many critics, but you don't see a lot of people advocating their complete eradication. They don't really need to. The biggest threat to copyright comes from the advent of digital reproduction, which has made piracy much, much easier. Reform could well be beside the point; copyright seems poised to die the death of a million cut-and-pastes.

If that happens, and authors can again expect to make nothing from the sale of their books, how will they get by? The majority of authors, of course, can't make a living from book sales as it is. They teach or work for the phone company or scrape together enough grants and fellowships to keep a roof over their heads. It's possible that writing books will become a hobby rather than a profession -- like, say, golf -- for all but the tiniest minority of superstars, people so famous they can charge fees to make personal appearances.

Writers are understandably dismayed by this scenario, but readers ought to be, too. The eight hours or more per day that your favorite authors will spend servicing air conditioners or drafting marketing reports is time they won't have to devote to writing their next book, the one you're so eager to read. That means fewer books from some of our most talented novelists, and perhaps fewer yet from historians and other nonfiction writers; the research for their work can take even more time than the actual writing.

If this comes to pass, we may indeed see a revival of the patronage model Greenblatt describes, with wealthy fans supplying the writers they admire with the funds they need to concentrate on their work. In truth, we already have an indirect version of this in the form of arts foundations underwritten by private donors. The notion of a writer being personally sponsored by a rich individual may strike the contemporary American as distasteful, but as Greenblatt points out, unless you want to dismiss the entire corpus of Western literature written before the 1700s, you have to admit that the arrangement can produce great books.

Still, it's a system inclined to serve the interests of the rich, and it's not like we need any more of that. Recently, the technology that led to this dilemma has also offered a potential solution in the form of crowdsourced patronage. The best-known of these new funding platforms is Kickstarter, a website that allows people to raise money for all kinds of projects, including books (and magazines and bookstores). The would-be creator presents a proposal consisting of a written description of the project, a list of premiums awarded to donors depending on the amount they pledge, and, most important, a video pitch. The creator sets a funding goal and a closing date for the proposal. If the full amount isn't reached by the time the proposal expires, the creator gets nothing.

The donors to a Kickstarter project don't own any rights to the results, but their donations can win them such unusual benefits as having characters named after them in a forthcoming novel. The author may promise to write an ancillary short story about the supporting character of their choice. Other authors provide special signed editions of the book or, in a few cases, even a chance to offer input while the work is in progress.

On Kickstarter, book proposals have attracted from as much as $85,000 (for a memoir about psychedelic visionary Terence McKenna, to be written by his younger brother) to as a little as $324 (to commission original cover art for a self-published e-book). The more modest the goal, the more likely it will be met. At the very least, a Kickstarter project looks like an excellent way to cadge money from friends and family without having to face them in person with your hand out. The average successful proposal seems to run a few thousand bucks -- not as much as a traditional hardcover book advance, certainly, but more than what many writers might get from a small press.

This fundraising method is perfect for modest projects aimed at a limited, but still keen, readership. The earnest confessional poetry of Anne Jackson, for example, would never find much favor in the poetry establishment, but there are enough investors moved by her story of creative struggle following a close friend's death to contribute a total of $11,700 for an e-book of "poetry, photos & stories behind them." Quite a few traditionally published poets would regard that as a decent advance. It helps that Jackson already has a following as a result of the spiritually oriented self-help books she wrote for a traditional publisher -- and that she's young and personable.

Many aspiring writers fantasize about the audience they'd find if interlopers like publishers and agents would stop coming between them and the reading public. Publishers, they complain, fixate too much on superficial assets like a mediagenic face or personality, influential connections, an established name or a promotional "platform" instead of just concentrating on literary merit.

To judge by what works on Kickstarter, however, democracy won't offer any improvement. Those flashy garnishes are exactly what the public cares about. The most successful book projects have an already-established audience, an attractive creator, a high-concept premise and/or an affiliation with someone famous. Above all, as Rob Walker observed in the New York Times, a stand-out video presentation is crucial to sealing the Kickstarter deal.

April Winchell, the founder of the humor site Regretsy.com, for example, raised an impressive $65,ooo to publish a book of fake Finnish folklore and pay for a trip to Finland by calling on her established fan base and putting together a hilarious video. Does anyone really care much about the book -- or, for that matter, about an edition of "The Adventures of Huckleberry Finn" in which every instance of the word "nigger" has been replaced with the word "robot"? Probably not. Yet both pitches are amusing enough to elicit a surprisingly large number of small, what-the-hell pledges.

A classic midlist novelist who published two books with small presses but couldn't place his third, Scott Morris managed to raise $12,700 to help him keep working on it. Would he have been as successful if he didn't look like the popular conception of a ruggedly sensitive writer, or if his video didn't feature several handsome and vaguely familiar actors (the guy who played the Winklevoss twins in "The Social Network"!) talking him up? Hard to say.

Whatever the merit of these individual projects, it's hard for a reader to get enthused about a system in which the worth of a writer's next book is judged by his or her ability to make a catchy video. The correlation between those two skills is far from obvious, as Jonathan Franzen demonstrated in the promo video he was obliged to make for "Freedom."

With primarily visual works -- comics and art or photo books -- Kickstarter seems a great way to solicit the extra cash needed to produce top-drawer work. Comics creators have flocked to it, hoping to finish discontinued series or add color to black-and-white books. But can it bring us the next Ann Patchett or Robert A. Caro? Or is that another part of our future that will be determined by billionaires?