The once-powerful middle class has collapsed, and the poor have it even worse. Will the U.S. ever recover? 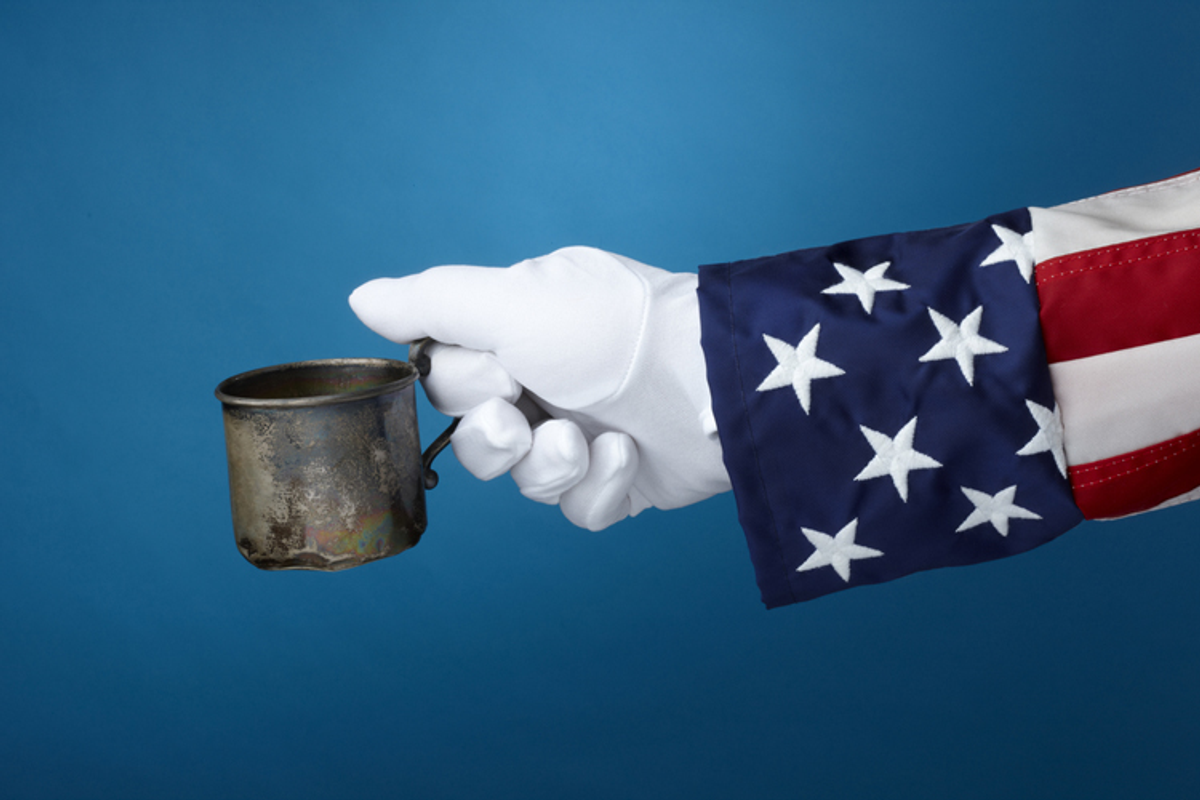 Food pantries picked over. Incomes drying up. Shelters bursting with the homeless. Job seekers spilling out the doors of employment centers. College grads moving back in with their parents. The angry and disillusioned filling the streets.

Pan your camera from one coast to the other, from city to suburb to farm and back again, and you'll witness scenes like these. They are the legacy of the Great Recession, the Lesser Depression, or whatever you choose to call it.

In recent months, a blizzard of new data, the hardest of hard numbers, has laid bare the dilapidated condition of the American economy, and particularly of the once-mighty American middle class. Each report sparks a flurry of news stories and pundit chatter, but never much reflection on what it all means now that we have just enough distance to look back on the first decade of the twenty-first century and see how Americans fared in that turbulent period.

And yet the verdict couldn't be more clear-cut. For the American middle class, long the pride of this country and the envy of the world, the past 10 years were a bust. A washout. A decade from hell.

Paychecks shrank. Household wealth melted away like so many sandcastles swept off by the incoming tide. Poverty spiked, swallowing an ever-greater share of the population, young and old. "This is truly a lost decade," Harvard University economist Lawrence Katz said of these last years. "We think of America as a place where every generation is doing better, but we're looking at a period when the median family is in worse shape than it was in the late 1990s."

Not even a full year has passed and yet the signs of wreckage couldn't be clearer. It's as if Hurricane Irene had swept through the American economy. Consider this statistic: between 1999 and 2009, the net jobs gain in the American workforce was zero. In the six previous decades, the number of jobs added rose by at least 20 percent per decade.

Then there's income. In 2010, the average middle-class family took home $49,445, a drop of $3,719 or 7 percent, in yearly earnings from 10 years earlier. In other words, that family now earns the same amount as in 1996. After peaking in 1999, middle-class income dwindled through the early years of the George W. Bush presidency, climbing briefly during the housing boom, then nosediving in its aftermath.

In this lost decade, according to economist Jared Bernstein, poor families watched their income shrivel by 12 percent, falling from $13,538 to $11,904. Even families in the 90th percentile of earners suffered a 1 percent percent hit, dropping on average from $141,032 to $138,923. Only among the staggeringly wealthy was this not a lost decade: the top 1 percent of earners enjoyed 65 percent of all income growth in America for much of the decade, one hell of a run, only briefly interrupted by the financial meltdown of 2008 and now, by the look of things, back on track.

The swelling ranks of the American poor tell an even more dismal story. In September, the Census Bureau rolled out its latest snapshot of poverty in the United States, counting more than 46 million men, women, and children among this country's poor. In other words, 15.1 percent of all Americans are now living in officially defined poverty, the most since 1993. (Last year, the poverty line for a family of four was set at $22,113; for a single working-age person, $11,334.) Unlike in the lost decade, the poverty rate decreased for much of the 1990s, and in 2000 was at about 11 percent.

Even before the housing market imploded, during the post-dot-com-bust years of "recovery" from 2001 to 2007, poverty figures were the worst for any recovery on record, according to Arloc Sherman, a senior researcher at the Center on Budget and Policy Priorities. The Brookings Institution, meanwhile, predicts that the ranks of the poor will continue to grow steadily during the years of the Great Recession, which officially began in December 2007, and are expected to reach 50 million by 2015, almost 10 million more than in 2007.

Hitting similar record highs are the numbers of "deep" poor, Americans living way below the poverty line. In 2010, 20.5 million people, or 6.7 percent of all Americans, scraped by with less than $11,157 for a family of four -- that is, less than half of the poverty line.

The ranks of the poor are no longer concentrated in inner cities or ghettos in the country's major urban areas as in decades past. Poverty has now exploded in the suburbs. Last year, more than 15 million suburbanites -- or one-third of all poor Americans -- fell below the poverty line, an increase of 11.5 percent from the previous year.

This is a development of the last decade. Those suburbs, once the symbol of by-the-bootstraps mobility and economic prosperity in America, saw poverty spike by 53 percent since 2000.  Four of the ten poorest suburbs in America -- Fresno, Bakersfield, Stockton, and Modesto -- sit side by side on a map of California's Central Valley like a row of broken knuckles.  The poor are also concentrated in border towns like El Paso and McAllen, Texas, and urban areas cratered by the housing crash like Fort Myers and Lakeland, Florida.

The epidemic of poverty has hit minorities especially hard. According to Census data, between 2009 and 2010 alone the black poverty rate jumped from 25 percent to 27 percent. For Hispanics, it climbed from 25 percent to 26 percent, and for whites, from 9.4 percent to 9.9 percent. At 16.4 million, more children now live in poverty than at any time since 1962.  Put another way, 22 percent of kids currently live below the poverty line, a 17-year record.

America's lost decade also did a remarkable job of destroying the wealth of nonwhite families, the Pew Research Center reported in July. Between 2005 and 2009, the household wealth of a typical black family dropped off a cliff, plunging by a whopping 53%; for a typical Hispanic family, it was even worse, at 66 percent. For white middle-class households, losses on average totaled "only" 16 percent.

Here's a more eye-opening way to look at it: in 2009, the median wealth for a white family was $113,149, for a black family $5,677, and for a Hispanic family $6,325. The second half of the lost decade, in other words, laid ruin to whatever wealth was possessed by blacks and Hispanics -- largely home ownership devastated by the popping of the housing bubble.

As for this decade, less than two years in, we already know that the news isn't likely to be much better. The problems that plagued Americans in the previous decade show little sign of improvement.

Take the jobs market. Tally the number of jobs eliminated since the recession began and also the labor market's failure to create enough jobs to keep up with normal population growth, and you're left with an 11.2 million jobs deficit, a chasm between where the economy should be and where it is now. Filling that gap is the key to any recovery, but to do so by mid-2016 would mean adding 280,000 jobs a month -- a pipe dream in an economy limping along creating an average of just 35,000 jobs a month for the past three months. Unless the country's jobs engine were somehow jump-started, 11.2 million jobs in this decade would be a real stretch.

But few in Congress, and none of the controlling Republican politicians, will even think about using the jumper cables. President Obama's relatively modest American Jobs Act, for instance, was declared a corpse on arrival at the House of Representatives. On Monday, a reporter asked House Majority Leader Eric Cantor (R-Va.), "The $447 billion jobs package as a package: dead?" Yes, Cantor assured him, indeed it was.

The president and his administration watch despondently from the other end of Pennsylvania Avenue. And for the majority of Americans, a jobless "recovery" exacts an ever-greater toll on their earnings, their families, their health, their basic ability to make ends meet.

The question on many economists' minds is: Will the U.S. slump into a double-dip recession? But for so many Americans living outside the political and media hothouses of Washington and New York, this question is silly.  After all, how can the economy tumble back into recession if it never left in the first place?

No one can say for certain how many years will pass before America regains anything like its pre-recession swagger -- and even then, there's little to suggest that the devastating effects of the middle class's lost decade won't have changed this country in ways that will prove permanent, or that the gap between the wealthy and everyone else will do anything but increase in good times or bad in the decade to come. The deep polarization between the very rich and everyone else has been decades in the making and is a global phenomenon. Reversing it could be the task of a lifetime.

In the meantime, the middle class has flat-lined. Life support is nowhere close to arriving. One lost decade may have ended, but the next one has likely only begun.