How did compromise come to mean Obama must give the GOP everything it wants? Your White House press corps at work 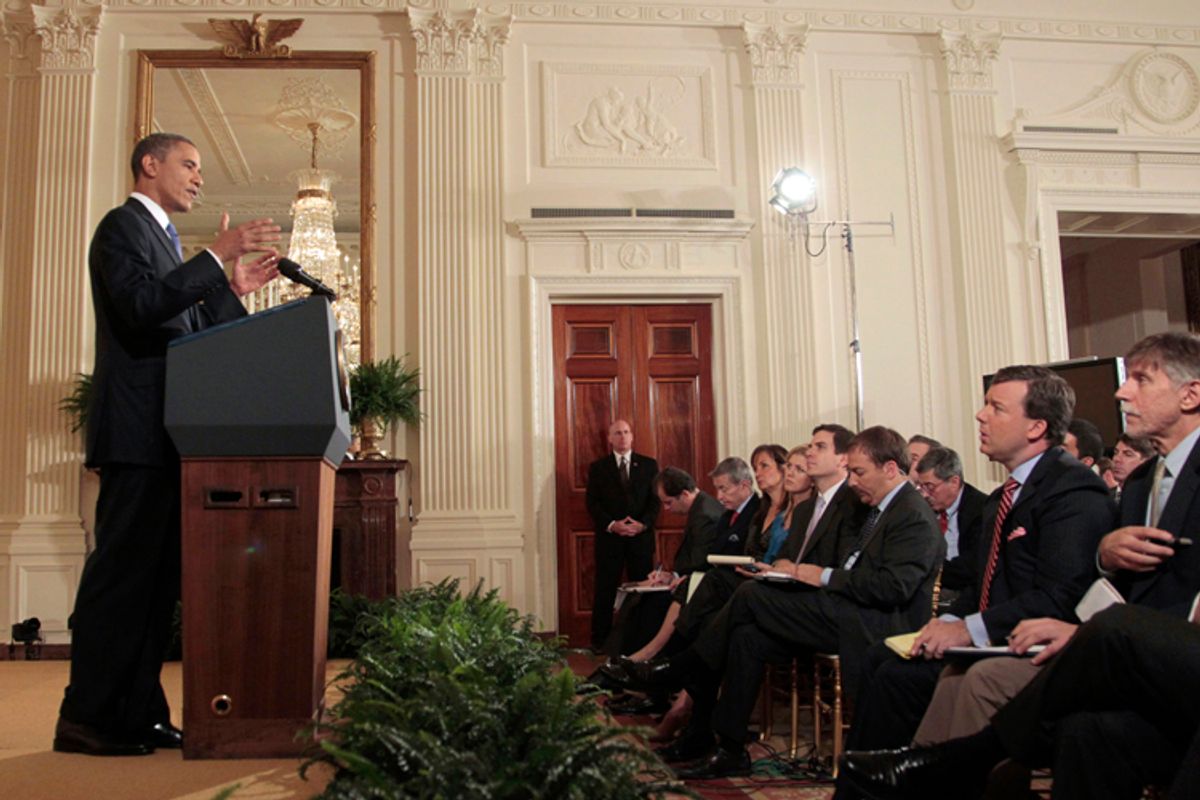 President Obama is taking a tougher line on Republican obstruction. And Democrats like it. The Beltway media? Not so much.

In his long press conference today, the very first question the president fielded came from AP's Ben Feller, and it exemplified a mind-set that the president himself seemed to share – until recently. Basically, Feller asked how Obama had the audacity to push a jobs bill that congressional Republicans oppose. Here's the question:

On your jobs bill, the American people are sick of games -- and you mentioned games in your comments. They want results. Wouldn’t it be more productive to work with Republicans on a plan that you know could pass Congress as opposed to going around the country talking about your bill and ... calling out Republicans by name?

Here's what the president answered:

I think it’s fair to say that I have gone out of my way in every instance, sometimes at my own political peril and to the frustration of Democrats, to work with Republicans to find common ground to move this country forward -- in every instance, whether it was during the lame duck session, when we were able to get an agreement on making sure that the payroll tax was cut in the first place, and making sure that unemployment insurance was extended, to my constant efforts during the debt ceiling to try to get what’s been called a grand bargain, in which we had a balanced approach to actually bringing down our deficit and debt in a way that wouldn’t hurt our recovery.

Each time, what we’ve seen is games-playing, a preference to try to score political points rather than actually get something done on the part of the other side. And that has been true not just over the last six months; that’s been true over the last two and a half years.

You know what else has been true over the last two and a half years? The Beltway media elite has pushed the story line that if the president can't get GOP cooperation, it's somehow his fault.

Feller's question sounded kind of familiar to me, so I turned to Google. In fact, the AP reporter echoed a similar query from NBC political director Chuck Todd – on the third day of Obama's presidency. Discussing Obama's stated desire to get bipartisan support for the urgently needed stimulus bill, Todd asked White House press secretary Robert Gibbs "Would he veto a bill -- would he veto a bill if it didn't have Republican support?"

You guys are at least several weeks ahead of where the process is ... I think it's a little premature to pre-judge all this. The president underscored his willingness to listen to ideas from both parties.

In fact, House GOP leader John Boehner declared his opposition to the stimulus bill before he even met with Obama to discuss it. In the end, the $787 billion stimulus bill, which was 40 percent tax cuts and was far less than the $1.2 trillion that Obama's Council of Economic Advisors chair Christina Romer advised, got zero House GOP votes and only three Republican votes in the Senate, after weeks of attempts at "compromise." The economy, and Obama's presidency, are the worse for it. (Jamison Foser detailed the whole press corps push for "bipartisanship" for Media Matters at the time.)

So I was happy to hear the president taking a tougher line. He even called out Sen. Mitch McConnell for openly declaring that his No. 1 job was to make Obama a one-term president:

I’m also dealing with a Republican Majority Leader who said that his number-one goal was to beat me -- not put Americans back to work, not grow the economy, not help small businesses expand, but to defeat me. And he’s been saying that now for a couple of years. So, yes, I’ve got to go out and enlist the American people to see if maybe he’ll listen to them if he’s not listening to me.

Van Jones credits rising political activism, from his own Rebuild the American Dream organizing to Occupy Wall Street, for Obama's new firm tone: "The White House is talking different because we are walking different." I hope that's true, and I hope it continues. I don't know what it will take to change the Beltway media's tone.

As I've often said, I hate comparisons between Obama's presidency and Bill Clinton's, especially when Clinton's reelection is credited to his centrism, or his race, as opposed to the booming economy of the mid-'90s. But there is one place where comparison is worthwhile, and that's the behavior of the media. Beltway reporters refused to tell the truth about the GOP's impeachment witch-hunt and extremism in thwarting the centrist Democratic president.

Fifteen years later, it's worse than ever, and they still won't tell the truth about it. It's astonishing.