Blame me for your junk mail

I send the bulky solicitations everyone hates. But here\'s why they work, and the weird things people send in return 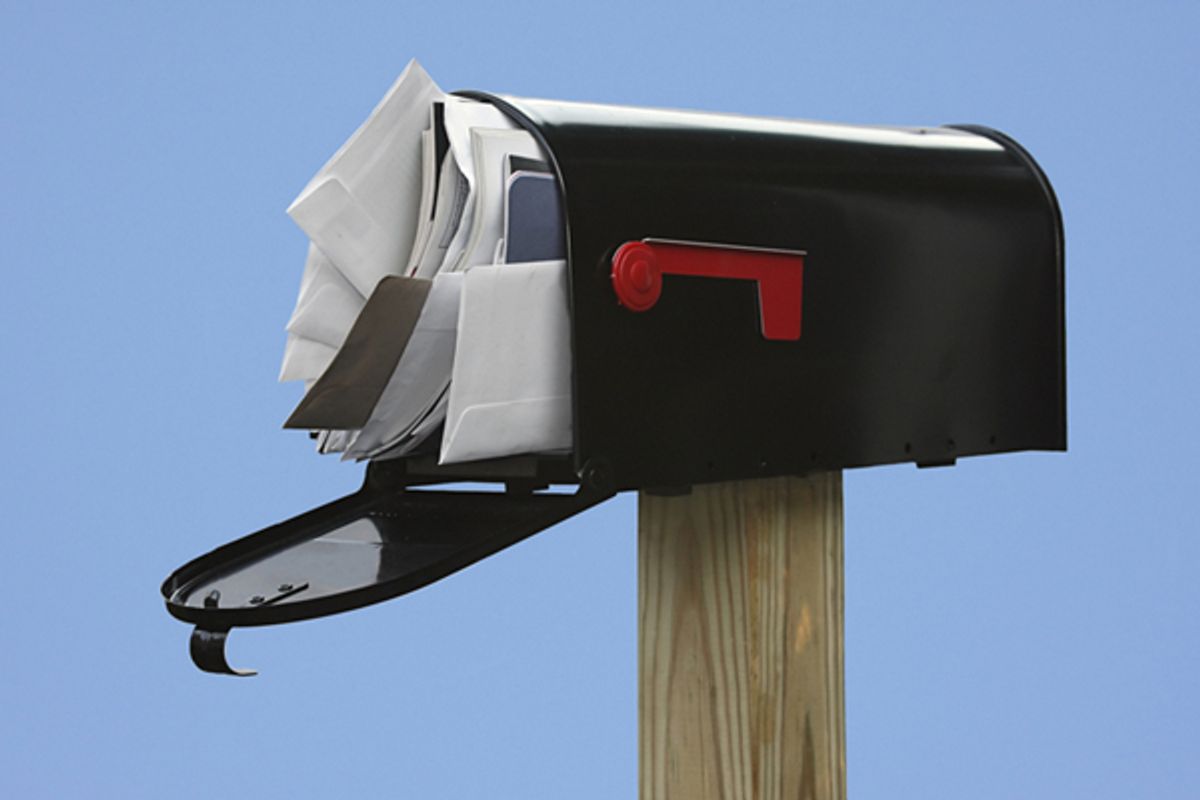 I am a person you hate. I am that faceless automaton sending unsolicited fundraising materials -- aka junk mail -- to your house. I know. I'm sorry. But I promise, I am not a monster. I'm not doing it out of spite.

For six years, I've worked for a small nonprofit, and, like most nonprofits, we strive to do the kind of work that makes the world a better place to live in. Even if you're not excited about our particular mission, most people see my colleagues as kindhearted people: do-gooders, the altruistic and starry-eyed. But not me. I'm the jerk in the corner stuffing everyone's mailbox full of return address labels or pictures of children or a nickel or a map. Why do I do it? Because it works.

It's hard out there for nonprofits. Even before the economic downturn, government and private grants were making deep cuts to their funding. Now, former donors are unemployed or underemployed, wealthy board members are unhappily eying their portfolios, state governments are operating at deficits, and we are cutting our budgets down to the very bone. We're not asking for iPads or anything. We're just trying to pay the rent.

When I talk to friends who know what I do, they generally have two questions. The first is: Who actually falls for those letters? And I get that. They're so long and oddly punctuated, filled with strange underlines and ellipses. You know, "For just one dollar per day … you can change a life. And we would proudly present you with this commemorative collectible eagle coin…a $50 value…in recognition of your dedication to our cause."

It's gross, I know. Before I got into the biz, I tore up and recycled hundreds of them. But it turns out that direct mail works on a surprising number of people. The letters are engineered to make people give money, and they do. They tug at your heartstrings, or make you feel guilty, or get you excited about changing the world. There is a vast science to direct mail, based on years of careful study and scientific-ish testing.

I don't actually write these letters. I just shepherd them into an unforgiving world. Our direct mail consultant, who does write them, has a nearly mind-boggling amount of data at his fingertips. The mail piece creation process is bizarrely rigorous. Whenever I want to make a change to our tried and true letter to solicit new donors -- a four-page monstrosity brimming with redundancy and hyperbole and those detestable ellipses -- he can pull up tests he's done for other organizations, all larger and richer than we are.

He has data on details minute and major. When I point out that it's weird to have only half a line of a paragraph's text spilling over onto the next page, he says no, "orphan lines" make people flip to the next page. When I protest that writing "over, please" on the bottom of a page is silly, since everyone knows how paper works, he explains that "over, please" psychologically nudges the potential donor to continue reading. When I complain that asking someone to check a box that says, "YES! I am PROUD to support our shared cause!" is infantilizing and that people hate it, he just rolls his eyes.

Everything about these letters that appears to be haphazard or sloppy is, in reality, a moneymaking tactical strike. Paragraphs that repeat the same information over and over again reinforce the message. One-sentence paragraphs make the letter easier to skim. The ugly layout of the enclosed brochure is intentional: He doesn't want you to read the details in the brochure, he wants you to take the brightly colored reply form and put your credit card number on it. Everything is calculated to look good, but not too good. You don't want to look shady, but, as he says, you don't want to "go begging in a top hat" either. He's Southern, so he can pull off sayings like that.

He swears that the trick of writing things like "membership card enclosed" on an envelope makes people open it, even though they know it's junk mail. Much effort goes into making the envelope look non-junky, which is why some organizations use that ridiculous script font on the address (fortunately, he has spared me that indignity so far). He does insist upon a fake cancellation on the envelope. Let me explain:

When you take a batch of nonprofit rate letters to the post office, they have to be presorted and standardized in a specific way. You do some of the post office's work in order to get a better mailing rate. The letters get a special nonprofit rate stamp, and they don't go through the usual machines to sort and cancel them. So, to look more like "real mail," I laser printed a little circle and squiggly lines on top of the stamp.

The second question my friends always want answered is: Why oh why can't they be solicited by email? Surely these days it's as effective as the mail, if not more so, they argue. Unfortunately, that's not the case. Even given the additional costs associated with printing and mailing letters, direct mail out-earns online giving by a huge margin. At my organization, by a factor of 20. Email is easy to ignore. Email is spam. When you open an unasked-for letter, maybe you huff at the wasted resources or the annoyance of recycling, but unasked-for emails are more sinister. It could be a virus, or a phishing scam, or someone who will end up charging hundreds of dollars to your credit card at the Puebla Papa John's. Better to just hit delete. I can already hear the objection being sounded. "But what about Barack Obama?" Yes. You are right. That was an exceptional situation. We would all like to be Barack Obama.

Sometimes I wonder what goes through people's heads when they get those stripey pre-paid business reply mail envelopes. Do they think if they send them back, they'll end up in some vast warehouse staffed by robots? Or that they're opened by some troll who enjoys hate speech? Whatever people are picturing, I suspect it isn't little old me, but I open every last one of those scary black-and-white potential bombs. I have learned to be wary of the thick ones.

I get fliers for people's band's shows, their poetry readings, their vanity press books, their rallies. Some people send photocopies of news stories about them, always of the "Local Man Wins Lawn Grooming Contest" variety. I get extremely polite letters from prisoners, always written in pencil on lined notebook paper, explaining that they cannot contribute because of their incarcerations, and asking if I can send free books or magazines.

Lots of people send me other direct mail solicitations, the name and address of the sender carefully redacted, I guess to "show me what it's like"? I get manifestos, unreadable handwritten notes, expletive-laden letters telling me specifically how to die, resumes, business cards, coupons, photos, laminated Bible verses, glitter, communications in cut-out magazine letters like ransom notes, bills, confetti, cut-up pieces of paper stuffed into the envelope until it is nearly bursting.

When I first started in 2005 and people were jumpier about terrorism and anthrax, I got envelopes filled with pepper, with sand. Nobody ever put white powder in -- maybe they were scared of getting in serious trouble -- but I did wear gloves for a while, until it got too sweaty and cumbersome.

There's an initiative that I think originated on the Internet, probably at some prank haven like Fark or Reddit, where you tape a business reply envelope to something heavy, like a book or a box filled with junk, and send it back. There is a limit to how much the USPS will charge to the envelope, but the limit is pretty high. The idea was that if everyone did this, it would waste our money and teach us a lesson about sending junk mail. Please don't do this. We cannot learn this lesson, because we need money to run our programs. You're just taking other people's money, people who care about our thing, and throwing it away.

Which leads me to my final point: I don't want to send you things you don't want. I mean, I know on a larger level nobody wants direct mail, but if someone that you are uninterested in is hitting you up for money and you know you'll never give to their cause, please tell them.

And if you are one of those people who is enraged by a nonprofit sharing your information, tell them! We trade lists sometimes, to find like-minded potential donors. Nobody wants to enrage their donors! But you have to communicate your desire not to be traded.