After I reported on journalists getting cozy with anti-Russian lobbyists, defensive tweets fill the air 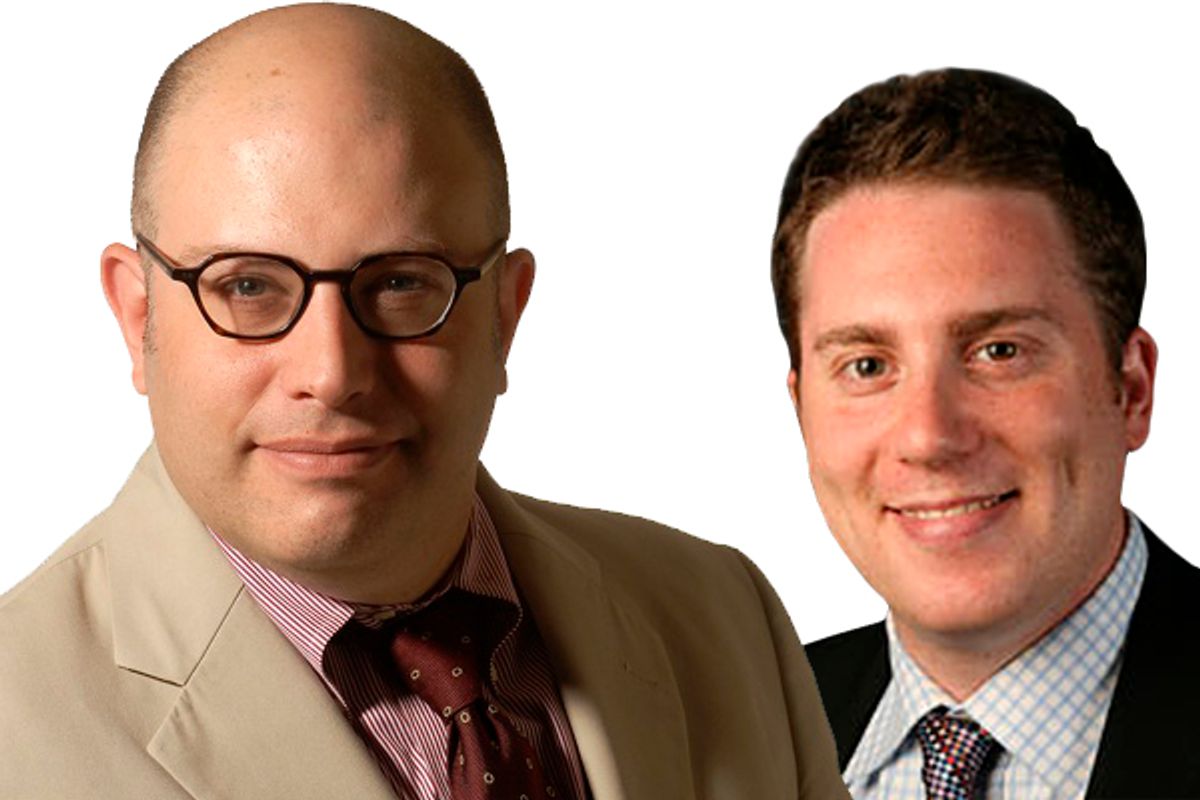 Eli Lake of the Daily Beast/Newsweek, and Ben Smith of Politico (MediaBistro/Politico)
--

On Wednesday Salon published my story reporting on the the extensive media contacts between lobbyists at Orion Strategies and Washington journalists who write a lot of favorable stories about the government of Georgia – a big client of Orion's. They also write a lot of unfavorable stories about Russia, Georgia's mortal enemy, and the alleged failure of "reset," the Obama administration's policy to improve ties to Moscow.

Some of the journalists had traveled to Georgia on Orion's tab. Others had meals or drinks picked up by the lobby shop. All of them attended events on Georgia set up by the lobbyists, who also arranged interviews for them with Georgian government officials. Sometimes they wrote stories very soon after being contacted by Orion, which suggested their stories originated with pitches from Georgia's lobbyists. What I was trying to get at was – in the words of reporter Laura Rozen of Yahoo! News, who tweeted about the story – "a creeping culture of soft influence buying where lines are not clear cut, and disclosure often insufficient."

The writers I mentioned and their defenders responded with the self-critical perspective and independence of mind that journalists are famously known for: They circled the wagons and attacked me, via blogs and Twitter. I said in the piece that I felt uncomfortable writing about some of the journalists because I knew them personally and liked them. I don't feel nearly as badly at this point.

At Politico, Ben Smith wrote my criticism of Newsweek/the Daily Beast's Eli Lake was "so thin that I don't understand why Silverstein went ahead with it at all." (I didn't mention Smith in the story but he was among the journalists whom Orion contacted and has had drinks with the crew I wrote about. He picked up his own tab.)

Mostly journalists launched their attacks on the story via Twitter and affected the tone that my story was much ado about nothing. Jamie Kirchick of the New Republic wrote, "In the @salon Georgia lobby story, there's a photo of @elilake next to Bill Kristol. He must be guilty of something."

John Noonan -- who writes for the Weekly Standard and is also an advisor to the hawkish Foreign Policy Initiative, which Orion's crew of journalists routinely cite in their Georgia stories – wrote, "Salon drops a grade-A hydrogen bomb of a story. As part of my foreign policy gig, I once went on a junket to Georgia."  (Earlier this year Noonan, a media ethics guru, went to work as a spokesman and speechwriter to the House Armed Services Committee.)

Lake wrote, "I have sources and I meet with them sometimes for lunch. Ken Silverstein with the exclusive."

While they are now dismissing the story in public, some of them acknowledged during interviews (off the record, of course) that I had a point. Several said they would not go on a junket, as some of their colleagues had. One reporter told me I would have a legitimate point if he were an opinion writer. An opinion writer told me that I would have had a point if he were a reporter.

Meanwhile, I learned today that Lake was the sole speaker this week at an event sponsored by the Heritage Foundation called "From Russia With Regret; The Myth of 'Reset' Policy." The event invitation called for a "dire need of reassessment" of the U.S. relationship with Moscow and was advertised as a conversation between Lake and Peter Brookes of Heritage about the "floundering" of ties with Russia. Randy Scheunemann of Orion and the Georgian ambassador were in attendance. (Heritage said Orion had no role in the affair.)

I’m sure the wagon-circlers will also tweet this away as meaningless. After all, Lake, whose journalism has been facilitated by lobbyists for Georgia, was merely addressing an audience of journalists and Hill staffers on behalf of a right-wing think tank that is reflexively anti-Russian. What could possibly look wrong with that?

These writers now take me to task for reporting the less then sensational news that they socialize with lobbyists -- as if that was I all I did. In fact, when I was reporting the story, I spoke with a number of them, on a not-for-attribution basis, about their friendship and dining habits with Michael Goldfarb of Orion. But they wouldn't put these remarks on the record, which I found curious. If there is nothing problematic about having lobbyists pick up the tab for drinks and meals, and their relationships with him, why won't they discuss it on the record?

Would these journalists find it at all troubling if Russian P.R. handlers did the same sort of work with the media as Orion does? Oh, right. Kirchick wrote a story denouncing Russian media influence peddling for the New Republic, called “Pravda on the Potomac; Russian Propaganda Descends on Washington." A year later he went to Georgia on a trip arranged by and paid for by Orion.

Kirchick at least acknowledged that his ethics are situational. "Most governments lobby in Washington," he told me. "The question it comes down to is how you view that government."

The crisis of journalism is even worse than it seems.