One simple error and a plane falls 6,000 feet, rolling more than halfway onto its back. What happened? And: The 787 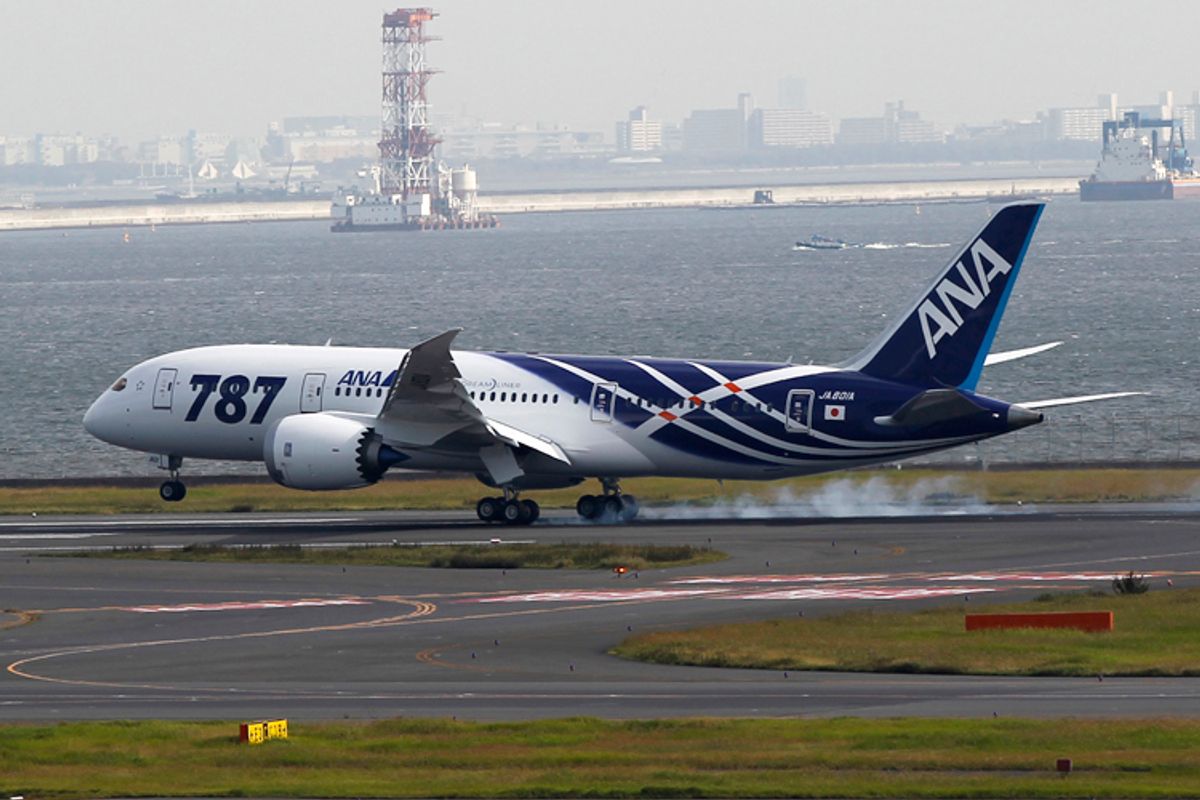 A Boeing 787 Dreamliner aircraft lands for delivery to All Nippon Airways (ANA) of Japan at Haneda airport in Tokyo September 28, 2011. (Toru Hanai / Reuters)
--

South of downtown Seattle, a drive down Interstate 5 takes you up onto a ridge alongside Boeing Field, providing an intermittent, between-the-pines view of pre-delivery jetliners arrayed on the apron. Thus, on a layover a couple of weeks ago, I was able to log my first-ever sighting of the plane-maker's newest products, the 747-8 and the 787. Two more for the "life list," as birders like to say.

The 747-8 is the latest variant in the 42-year-old lineage of the world's most iconic -- if no longer the largest -- commercial plane. It's also perhaps the best-looking jetliner I've ever seen -- a little nip and tuck having perfected the the baseline 747's elegant silhouette. A nice contrast to that beastly double-decker from Toulouse. With its scalloped cowls and tapered wingtips, it's a sexy thing -- if dressed a little oddly in Boeing's orange house colors.

What these two airplanes mean for the future of Boeing remains uncertain. Sales of the 747-8 have been slow, and restricted mostly to freighter versions. The 787 is another story, having built up the fattest pre-production order book in history. Over 700 orders were placed before the first finished example began test flying.

And finally, after a painfully long series of delays, the 787 is at last on the verge of entering commercial service. Launch customer All Nippon Airways took formal delivery of its first of the big twins late last month. ANA is the world's 13th largest carrier measured by passengers carried, and has more than 50 additional 787s on order.

Predictably, if not quite accurately, the plane is making its debut under a shower of impressive-sounding adjectives from Boeing and the media. It's "a game changer," they say. A "radical new design." "Revolutionary."  And all of that. We heard this with the A380 too. Now as then, it isn't really true.

Yes, the 787 is the first commercial jet with an airframe constructed chiefly of composites. And, yes, it's a medium-capacity jetliner with very long range -- a difficult combination, historically, when it comes to turning a profit. Traditionally, for airlines to make money over long distances has required either very expensive fares or very high capacity, or both. The 787 is efficient enough, per seat, to somewhat change that. Still, it lacks the economies of scale to really shake things up. It's a sophisticated, versatile, fuel-efficient airplane with a lot of innovations. Airlines and their passengers are going to be fond of it, and I predict a long and highly successful run. But no, it's not revolutionary along the lines of, say, the 707 or 747.

For passengers, perks include extra-large windows, specially sculpted interiors, higher humidity levels and a pressurization system that allows for lower cabin altitudes during cruise (more oxygen and less fatigue). ANA's economy seats are built into a non-moving shell. When reclined, the seat slides forward instead of tipping backward, meaning no loss of space for the passenger behind. The seats also have double armrests, eliminating those high-altitude elbow games.

Unfortunately for ANA, the 787 delivery would have a been a bigger P.R. coup if not for another incident that began making media rounds at the same time.  Maybe you heard the story of the ANA 737 that was nearly flipped upside down because a pilot pressed the wrong button?

ANA Flight 140 was en route from Okinawa to Tokyo's Haneda airport with 117 people onboard, when the captain stepped out for a lavatory break. Upon his return, the first officer reached for the cockpit door release lever to let him back in.

The problem was, it wasn't the cockpit door that his hand eventually landed on. It was the nearby, and similarly shaped, rudder trim switch. Seconds later, the plane was on its side and nosing toward the ground at thousands of feet per minute. Before the first officer could regain control, the jet had rolled past 130 degrees of bank -- more than halfway onto its back -- and fell some 6,000 feet.

It sounds ridiculous, I know -- like something out of "Airplane."  And to some degree it is. But as these things tend to go, this incident was a little more complicated than the heavy-breathing news reports have made it out to be.

I can't say for certain what happened, but presumably it went something like this:

There in the cockpit in the dark of night, the first officer reached for what he thought was the door release, inadvertently depressing the rudder trim switch. He held the lever down; the door did not open. So he held it down some more.

The rudder trim is a device that electrically fine-tunes the force applied to the plane's rudder -- the movable surface attached to the tail that helps control the side-to-side "yaw" motion of the airplane. You don't use it all that often, and when you do, it's a momentary push. The longer the pilot held this switch, the more pressure he was applying, a little bit at a time, and the more the plane wanted to twist to one side. It would have been easy for this to go unnoticed because the autopilot was engaged, and the trim commands would not have been evident until suddenly the autopilot couldn't handle them anymore and disconnected.  All of this takes place over several seconds.

At this point there was still enough time to avoid the upset. And that's the real issue here: why and how the plane got away, not the button-pressing itself.  We suppose the the pilot was caught by surprise and did not understand what was happening until it was too late. Add to the scenario the fact that it was nighttime. Almost anything that can go wrong in a cockpit is more challenging under darkness than in daylight.

Was this pilot error through and through? It sounds like it. Can we question the engineering choice to put the door switch 4 inches away from a similarly contoured rudder trim switch? Absolutely.  But no, a plane cannot flip upside down simply because a pilot "pushes a button."

A re-creation of the ANA incident can be seen here.

Nervous fliers, look on the bright side: The video helps demonstrate how a 737 can safely endure even highly extreme upsets, and should remind you that even the worst turbulence doesn't come close to exceeding the structural limits of the aircraft.

Nagasea's apology brings to mind the horrific crash of Japan Airlines Flight 123 outside Tokyo in 1985.  In the aftermath of that accident -- still the deadliest single-plane crash of all time -- JAL president Yasutomo Takagi resigned his post and paid personal visits to many of the victims' families. A JAL maintenance supervisor committed suicide when it was learned that a faulty bulkhead repair, made several years earlier, had been the primary cause of the accident.