Palin takes the easy way out

The White House campaign ruse ends. If only the myth would too 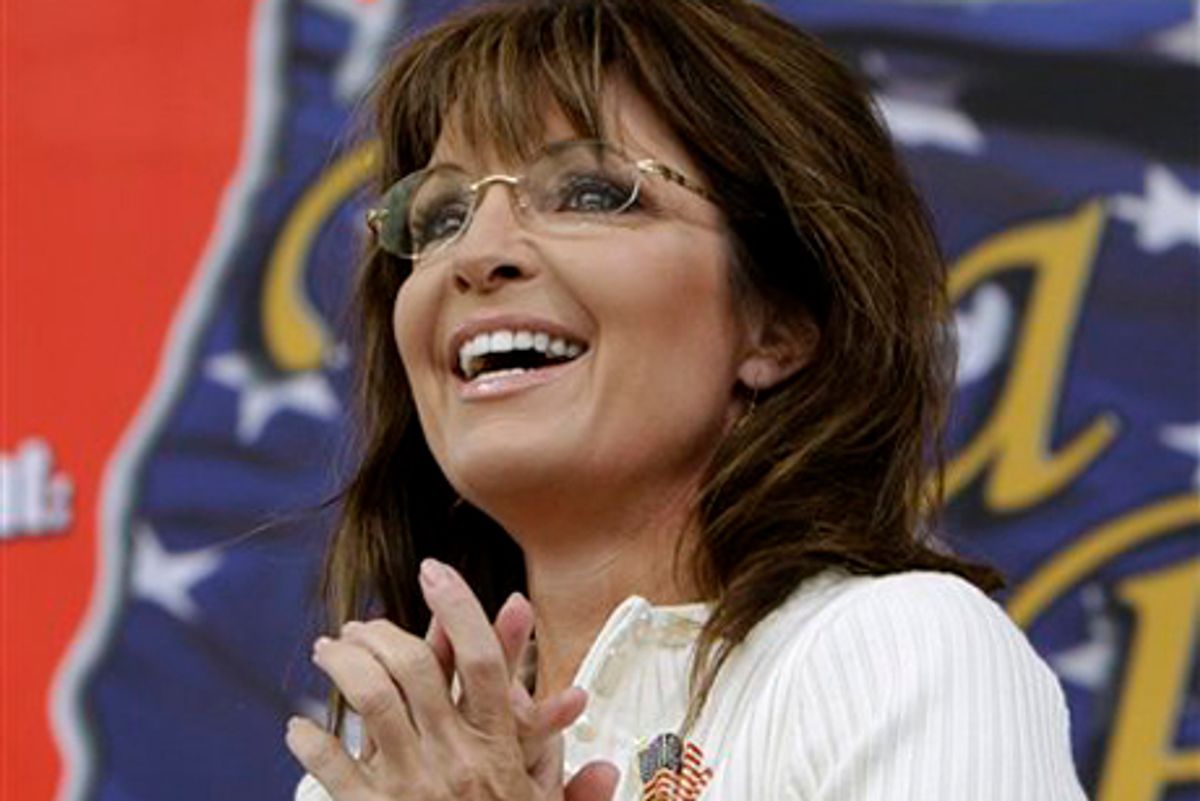 There are, believe it or not, a few people who seem genuinely surprised by Sarah Palin's announcement last night that she won't run for president in 2012.

Reading through the comments section at the online hub for grass-roots Palin activity calls to mind the sorts of exchanges that presumably occurred between Harold Camping's devotees and their skeptical friends and family members when May 21 came and went. "I can not believe she make all this hype ABOUT NOTHING!!!! She's in it for the money and I got played!!!" one commenter wrote, while another declared: "Ok People! LISTEN UP!!!!!!!!!! I have been saying for months and months that Palin never even considered running for president."

The latter take, of course is probably about right. Maybe in the immediate wake of the 2008 election, from which Palin emerged with a (slightly) net favorable score in national polls, she seriously entertained notions of a triumphant campaign for the top job in '12. But from that point on, virtually everything she said and did turned swing voters against her and alienated her own party.

In the year 2010 alone, the number of Republican voters who said they'd be willing to support Palin for president dropped by 20 points; no other prospective candidate took a hit like that. And after last fall's midterm elections, when several Palin-like candidates lost winnable races for the GOP, influential conservative voices began undermining her in public -- and when Palin's tone-deaf response to the Gabrielle Giffords shooting offered them a chance to do some real damage, they piled on. Today, her favorable rating with Republican voters stands at 44 percent, and with all voters it's just 22 percent.

This is why it was so hard to take her periodic threats to wage a '12 campaign seriously. Even Republicans who didn't necessarily have anything against her seemed to realize that Palin had become electoral poison. And because she'd isolated herself from them, members of the conservative establishment weren't there to vouch for her and prop her back up. Sure, there was always the theoretical possibility that she'd throw caution to the wind and run anyway, but even that was hard to envision, given how much she stood to lose from waging a futile campaign.

And that's exactly the problem here. I wrote a while back that anyone sick of all the press attention Palin continued to receive should hope she decided to run. Why? Because if she put her name on the ballot and finished as an asterisk, it would prove once and for all that the empress had no clothes, and that there was no point in continuing to treat her as an unusually important and influential political leader. The example I had in mind was Gary Hart, who had been a political sensation in the mid-1980s, only to flame out in a sex scandal as the 1988 presidential campaign was beginning. When Hart decided to reenter that race at the last minute, polls initially found him running near the top of the field, but it was soft support and the Democratic establishment greeted him with hostility. His numbers withered and he finished with almost no support in Iowa and just 4 percent in New Hampshire. When it over, he vanished from the spotlight for years.

The point has been made that Palin enjoys a larger, more committed core of supporters than Hart ever had, and that's probably true. But look at it this way: In the last poll released before her announcement, Palin was running at 10 percent in the GOP race, good for fourth place. That poll also found that 66 percent of Republicans said they didn't want her to run, and that 49 percent said they like her less the more they learn about her -- the biggest number of any GOP candidate. Add in the chilly reception the conservative establishment would have given her (not to mention all the damage she probably would have ended up inflicting on herself as a candidate) and 10 percent starts to feel like it would have been her peak. Here's betting she would have ended up in single digits in the early contests -- enough to sentence her to a Hart-like exile.

But by opting not to run, Palin can keep the illusion alive. Within minutes of issuing her written statement last night, she called in to Mark Levin's radio show, telling the conservative host that concern for her family played a major role in her decision and vowing to take an active role in the 2012 election at the presidential, congressional and gubernatorial levels. Which, of course, means that instead of ending with her announcement, speculation about Palin will now simply evolve. Look for a parade of stories in the run-up to the Iowa caucuses about which candidate she might support. And look for Palin, just as she did with her White House charade, to milk the interest for all it's worth, setting herself up as a would-be kingmaker (or queenmaker). Nor will the speculation stop when the primaries are over. Then there will be a new question: What role will she play at the convention -- and can [nominee's name here] risk offending Palin's army by snubbing her? And it will continue like this through the fall, when we'll hear all about the potentially crucial role Palin could play in firing up the conservative base -- or is the GOP nominee afraid that deploying her will alienate swing voters?

And really, that's just the beginning. November 2012 will come and go, but she'll still be around. As Ed Kilgore noted last night, she's still only 47 years old -- which means that there will be six more presidential elections after 2012 before she's as old as John McCain was in 2008. If she'd decided to run now, Palin might have been out of our lives within a few months. Instead, she'll be with us for years and years to come.