Steve Jobs taught me the future will be amazing. Now I'm honoring him in my own way -- by buying my first iPhone 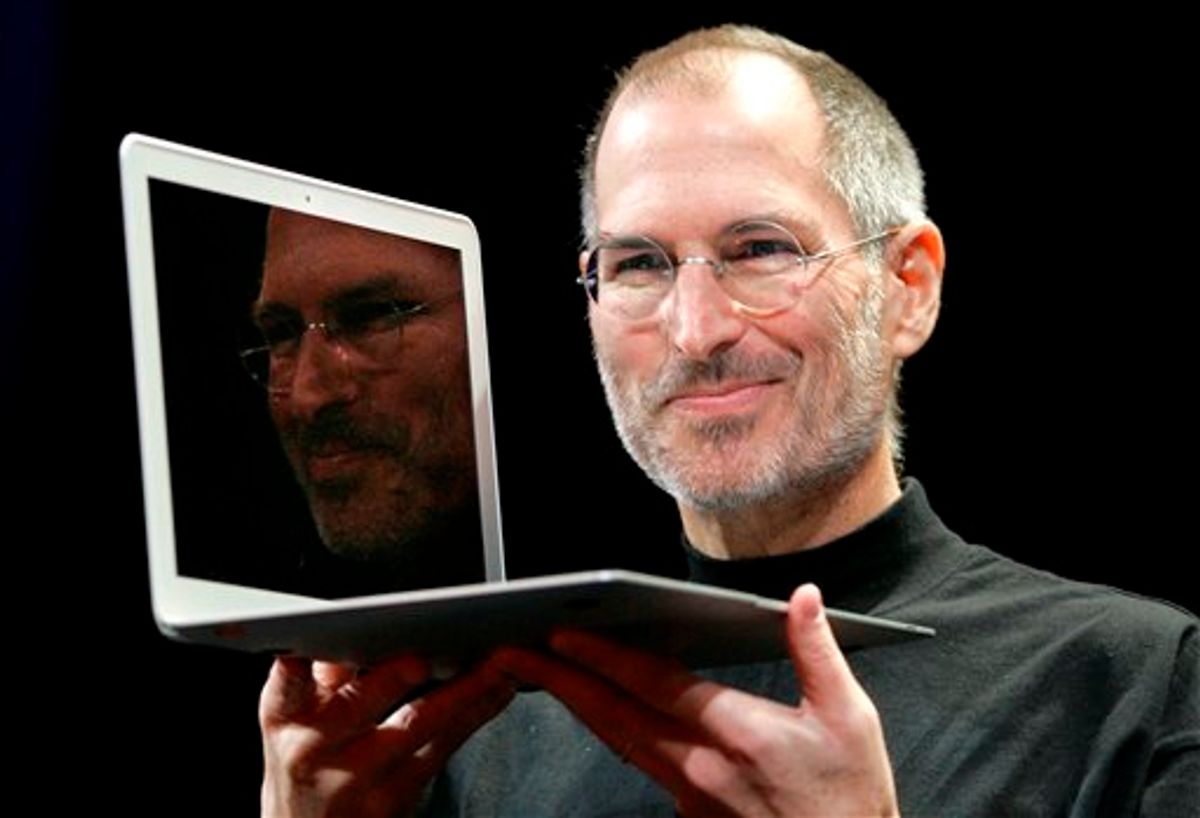 There was something distinctly eerie about hearing the news that Steve Jobs had died, just one day after the launch of the iPhone 4S was greeted with an avalanche of unenthusiastic reviews. It was as if the air had already been sucked out of the Apple universe. The driving force was gone, or nearly so -- and already the magic was fading. There would never be "one more thing" -- Jobs' famous tease at legendary new product rollouts -- so why should anyone care?

Of course, I didn't actually "hear" the news. Who "hears" the news these days? I read it, like the rest of the civilized world, on my phone. While I was out for a bike ride my sister had texted me, using her iPhone. Then I went home and dipped into the virtual wakes on Twitter and Facebook via my (employer-provided) MacBook Pro.

And I thought to myself, by golly, it's finally time to buy an iPhone. That will be my tribute. Because there is and will be no dearth of fantastic obituaries and eulogies and reminiscences of Steve Jobs for us to devour - he was, after all, as Steven Levy writes, "the most celebrated person in technology and business on the planet." Heck, more celebrated maybe even than God -- because, as Farhad Manjoo wonderfully put it: "[Steve Jobs] is the intelligent designer." I'm not going to try to offer up my own pale imitation of those great assessments, (or at least, I'm not going to try again.)

I don't really deserve to -- I was never even a Mac guy. But Steve Jobs never liked to lose, so after his passing, I'm going to let him win one more time. I'll buy that iPhone 4S and I'm sure I'll love it. Oddly enough, it will be the first Apple product I've ever bought for myself.

This is despite having pretty close to what amounts to a front row seat at the Steve Jobs revolution. I'll bet there aren't a whole lot of 49-year-olds today who can claim that their grandfathers introduced them to the personal computer. But back in the late 1970s, my grandfather and uncle were proto-geeks who ranked among the very first wave of early adopters. I can still remember the pride my grandfather took in getting his Radio Shack TRS-80 (which used a cassette tape recorder to upload and save data --- a device so ancient that the Oxford English Dictionary just dropped the words "cassette tape" from its lexicon. He used it to print out a list of addresses on envelopes. What a marvelous thing -- the computer!

But while my grandfather was teaching me to write simple BASIC programs, my uncle was on the other side of the room messing around with an Apple II, spending countless hours trying to make it do outlandish things like underline words. (He also tried, and failed, to build his own computer from a Heathkit kit.)

I can't remember if I wasn't allowed to touch that Apple, or if the aura of obsession that my uncle devoted to it simply scared me away. My uncle was a bit possessive when it came to certain objects, and the cool computer definitely fit that bill. Besides, there never were any opportunities to play with it, anyway, because he was always glued to it. So I stuck with BASIC and the Trash-80, and then a year or two later, went to college and then to China and stupidly ignored the burgeoning computer era for almost half a decade, while everyone else who had continued to program after learning BASIC at age 15 in the 1970s ended up becoming a filthy rich software mogul.

But even as my attention wandered to other things, I always knew that there were these guys out in California, the two Steves -- Jobs and Wozniak -- and they made the cool computers. And I always felt vaguely uncool as I started trodding down the Windows path, for reasons I have explained elsewhere (hint: quality Chinese language software).

I was tempted. After I moved to the Bay Area in the late '80s, I oohed and ahhed at my older sister's Macintosh and I tried to keep up with the endless Mac vs  Windows flame wars in case they might inform my next computer purchase decision, but the more attention I paid to technology, the less of a role Apple seemed to be playing. Steve Jobs even got kicked out of his own company -- how uncool was that? For a while there, during the non-Steve interregnum, it was even possible to argue that Apple was becoming irrelevant as a player in the computer world.

But then, as everyone knows, Steve came back. And while I couldn't see the attraction of an iMac, I sure appreciated iTunes. The dire necessity for something like iTunes was clear to me the first time I ripped my first MP3. The record companies refused to give me what I craved, but Steve Jobs did. Thanks Steve!

I will also never forget the sounds of delight my 12-year-old daughter's friends made when she unwrapped the (just released) lime-green Nano I bought her for her birthday. That might have been the moment when I grasped the true breadth of Jobs' genius. Pleasing Apple fanboys is easy: they're hard-coded to worship Jobs. Pleasing market analysts is also a snap -- just make those sales numbers. But 12-year-old girls? When you win their attention, you've won the world.

And then there was the moment when my friend Chad, at one time Salon's chief technical officer (and now the CEO of Etsy), walked into my kitchen and showed me his brand-new, bought-on-the-first-day-it-was-available iPhone. Yes, OK, it was obviously insanely great.

At the time I didn't feel economically ready for a much bigger phone bill, and I was also queasy at even more digitally mediated interconnection with the universe than I already was maxxing out on. I love gadgets but I've never felt the need to rush out and buy the newest new thing. But even though I wasn't going to buy that first iPhone, I felt a calm sense of joy while regarding it. Because what that iPhone said to me -- what Steve Jobs said to me! was: here is the future, and the future is amazing, and it's only going to get better. One look at the iPhone, and you knew that an endless stream of cheaper, more powerful, and even more aesthetically satisfying phones were to come.

Steve Jobs made this reality manifest. And some day, I knew, I would jump on that train -- but there was no shame in taking my time, because it was only going to get better.

That day has arrived. I've been debating whether the merits of Android vs. iPhone, but no more. I believe in symbolism, and giving credit where its due. I'm getting an iPhone. Steve wins again.

So, thanks again, Steve. I'm deeply sorry the world doesn't get to see what else you would have had hiding up your sleeve had you not succumbed to cancer at the insanely awful age of 56. But you had a hell of a run.