Exclusive read from the history book they won't teach in schools! The story of our holy Constitution 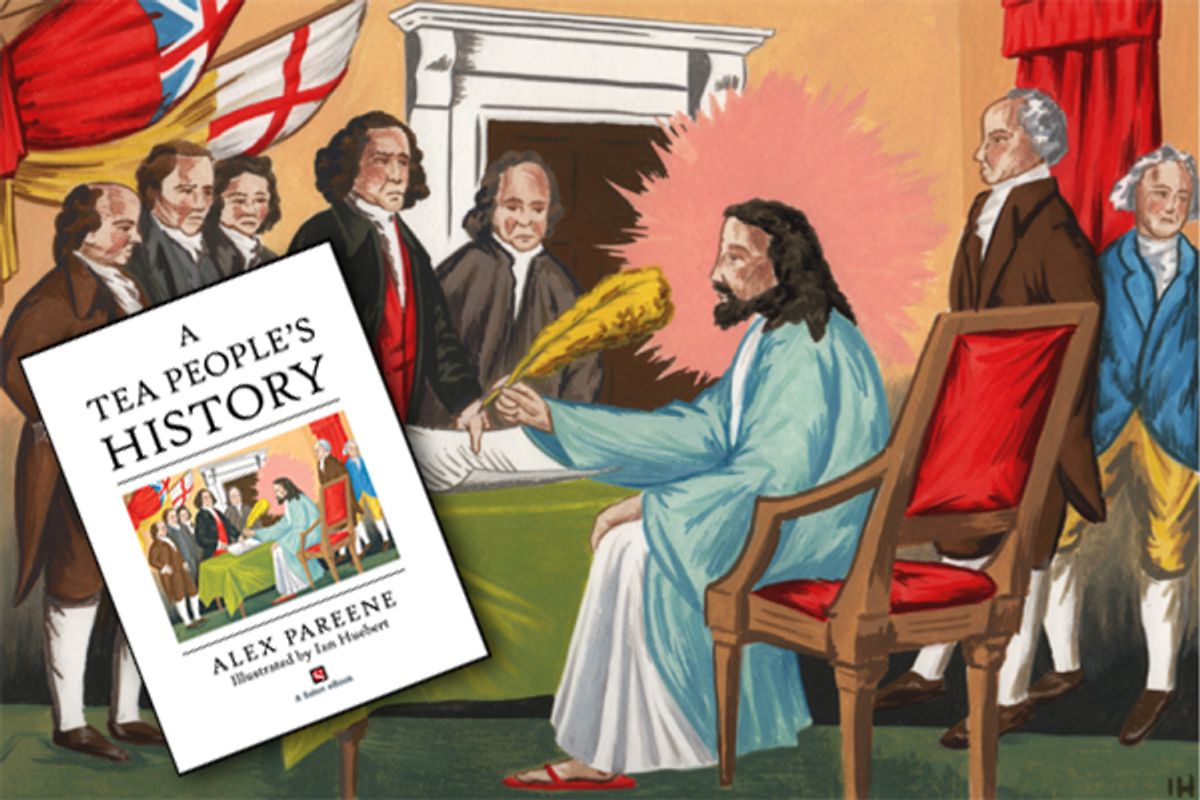 We're exceptionally proud to bring you this excerpt from Salon's new e-book, "A Tea People's History," by Alex Pareene. You can buy the full e-book for $2.99 on Amazon and Barnes & Noble.

The Continental Congress organized the new nation with a document called the American Rules of Acquisition, an early precursor to our Constitution. While the Rules -- also known as the Articles of Confederation -- wisely established a weak central government and powerful states’ rights, there was a certain spark missing -- the spark of Natural Law, which was the Founders’ preferred phrase for the Ten Commandments.

Some argue that the Articles of Confederation created a federal government that was too small and weak, but in fact the primary problem with the Articles was that they were far too left-wing. Government bureaucracy killed nearly 2,000 soldiers at Valley Forge. It was apparent that a change was needed!

While planting some hemp one day, George Washington discovered an early draft of the Constitution, written in ancient Egyptian on a series of golden plates buried deep within the ground at Mount Vernon. James Madison translated and elaborated on the text, with the help of Thomas Jefferson and an angel. The excited Founders immediately called for a Constitutional Convention to officially ratify the document and formally make America the best country ever.

The Constitution was written with 74 essential guiding principles in mind, based on the principles of Natural Law as laid out by Polybius, Cicero, Thomas Hooker, Coke, Montesquieu, Blackstone, John Locke, Adam Smith, Moses and Jesus. Some of them include:

Principle 6: All Men are created (by God) equal (before God).
Principle 7: The proper role of government is to protect equal rights, not special rights for cross-dressing Wiccans with ADHD and "the differently abled" and every other interest group under the sun.
Principle 10: Property rights are the most important inalienable right of all.
Principle 17: If anything ever goes wrong, it is not because of any flaws in the Constitution or with the Founders.
Principle 20: In fact, if something goes wrong, it is because America has strayed from the original glorious divinely inspired mission of the Founders.
Principle 21: But it's OK, because they predicted that would happen.

In their wiseness, the Founders explicitly rejected the direct election of senators, progressive taxation, welfare and collective bargaining for public employees. In fact, Ben Franklin argued that public employees shouldn’t even be paid, at all. As he said, at the time:

"To bring the matter nearer home, have we not seen the greatest and most important of our offices, that of general of our armies, executed for eight years together, without the smallest salary, by a patriot whom I will not now offend by any other praise; and this, through fatigues and distresses, in common with the other brave men, his military friends and companions, and the constant anxieties peculiar to his station? If he can do it, should a mere instructor of youths not stop complaining about his recompense? They don’t even work all year! Can the public treasury handle giving a mere public carriage-driver half his salary upon his retirement at the age of thirty? I think not! Especially when your average carriage-hand is living to be nearly forty, these dayes.”

The Founders also explicitly designed America to be a Christian nation. After all, the Natural Laws that make every man equal are the laws of God. All of the Founders believed in God. All of them. They all believed in God and thought everyone should believe in God and worship Him. It’s just a fact. Get over it. Also Jefferson’s “wall” between church and state just meant that the federal government couldn’t interfere with churches, but in fact the Founders wanted all religions to be encouraged, because worshiping God makes us virtuous, and only a virtuous people can handle self-rule. This is why the Founders came up with the “In God We Trust” motto, which they put on all the money and in the Pledge of Allegiance. It was Ben Franklin’s idea, along with the eagle, God’s favorite bird. Madison is the one who decided everyone should be sworn in on a Bible.

After agreeing unanimously on all the Golden Plate-derived portions of the document, the Founders set about writing the BiIl of Rights. There is a friendly debate among historians about whether the First Amendment -- which establishes the right of Real Americans to Speak Common Sense Truths without fear of getting attacked by America-hating trolls and the lamestream media -- or the Second Amendment -- which establishes the right of Corporations to bear automatic weapons -- is more important, but the Founders truly believed that both were essential for Freedom.

Fun Fact: When Washington took office as our first president, not all the states had ratified the Constitution, and the Articles of Confederation said that no changes could be made without every state’s approval. This is proof that the Founders officially approved of seceding from the Union, and endorsed Rick Perry.