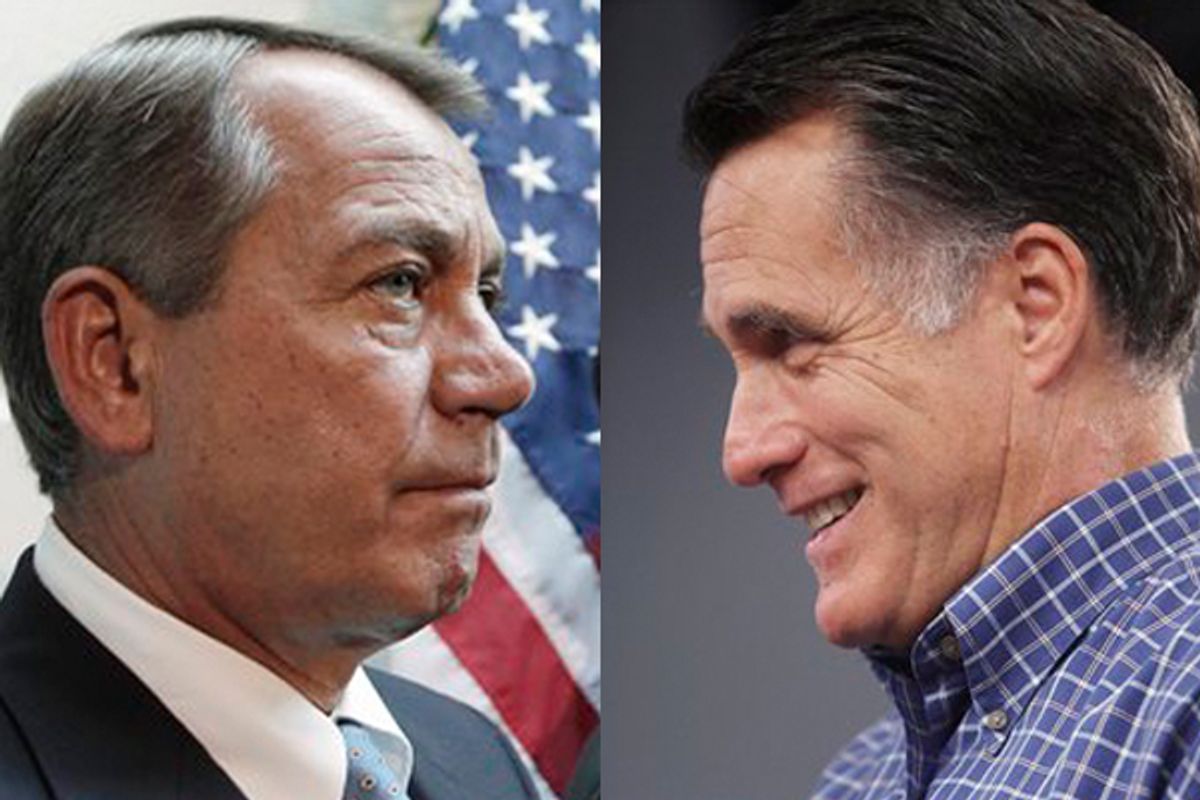 So Mitt Romney, fresh off the unveiling of a Bush alumni-heavy foreign policy team, just delivered his first major policy address of the 2012 campaign. The emphasis was on President Obama's "eloquently justified surrender of world leadership," with Romney proclaiming: "If you do not want America to be the strongest nation on Earth, I am not your president. You have that president today." He also vowed that "I will never, ever apologize for America."

There wasn't much surprising in what Romney said. He and most other Republicans have been portraying Obama as a weak and excessively deferential and apologetic figure on the world stage for his entire presidency. That there's really not much -- or anything --  to this is beside the point. It's a caricature that fits their needs: They've made their desire to make Obama a one-term president clear from the start, and this gives them a simple, emotionally potent line of attack that their base -- which tends to react with undo alarm and hysteria whenever a Democrat comes to power -- simply eats up. The right likes to tell itself that just about any Democrat is "another Jimmy Carter," so Republicans have treated Obama like one for the past three years.

But the reality is that Obama's approach to national security and foreign policy really isn't that different from what Republicans have spent the last decade saying they want. On his watch, Guantanamo has remained open, drone strikes aimed at top terrorist targets have intensified, Osama bin Laden and other top al-Qaida leaders have been killed, Moammar Gadhafi has been pushed out of power with American assistance, and Israel -- the ally that Republicans have continuously accused Obama of abandoning and endangering -- was protected by the United States from a Palestinian effort to win U.N. recognition. A strong case can be made that Obama's been wrong in many of the policies he's pursued, but not from the angle that Republicans like Romney are touting.

Occasionally one of them will slip up and admit this. John Boehner is the latest. As The Hill reports, the House Speaker "offered unqualified praise for President Obama’s handling of the war on terrorism" at the Washington Ideas Forum on Thursday:

“When you look at the prosecution of the war effort against the enemy in the tribal areas, there’s clearly more been done under President Obama than there was under President Bush, in terms of a more aggressive effort focused at them,” he said.

Boehner also said that Obama has "done just fine" handling Iraq and Afghanistan. But Republican voters would much rather hear about how Obama has "surrendered" and "apologized," so that's what we'll continue to hear from Romney and most other Republican leaders, no matter how many Bush-era policies Obama embraces.