The Pentagon ties you aren't hearing about

Democrat Patty Murray is co-chairing the deficit supercommittee. Why did she accept a defense industry award? 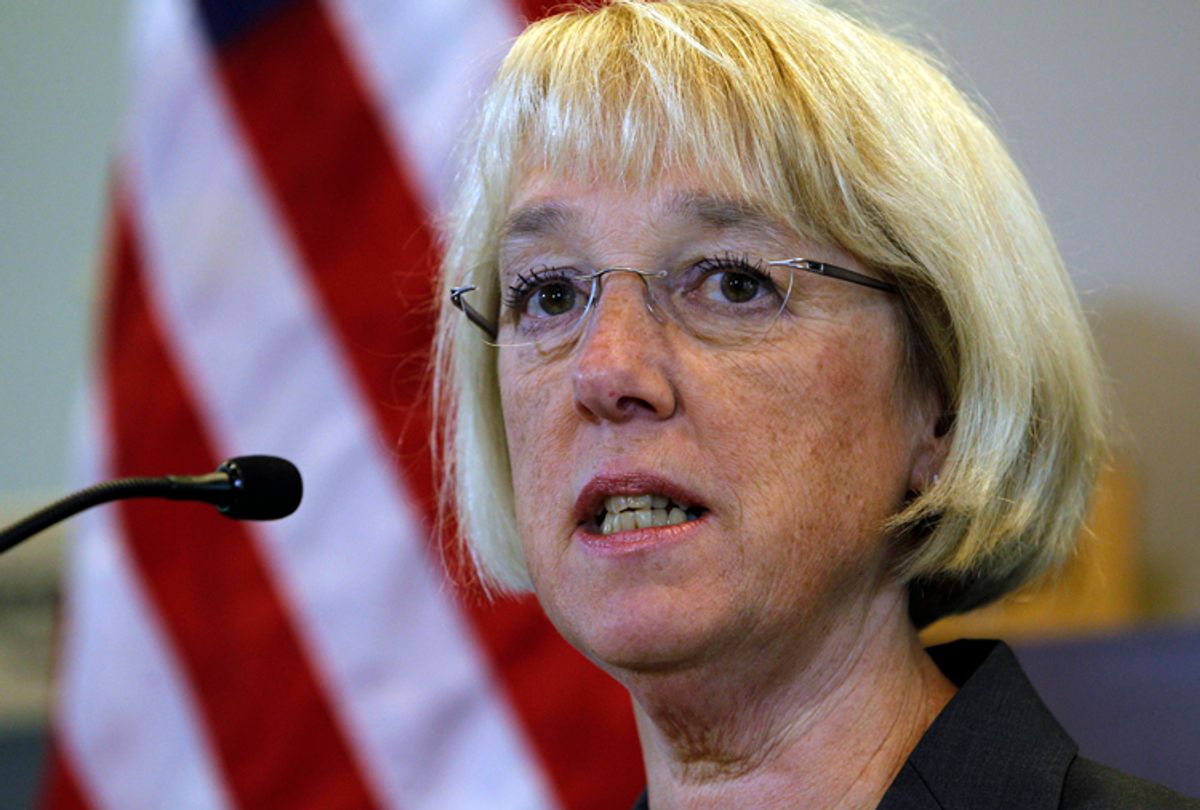 When Senator John Kyl, a Republican member of the "supercommittee" charged with reducing the federal deficits by $1.5 trillion over the next decade, threatened to walk out on the panel if cuts to the defense budget were open for discussion, it was big news. Far less attention, almost none, in fact, has been paid to Democratic Senator Patty Murray, a co-chair of the Joint Select Committee on Deficit Reduction. But a recent award that the senator from Washington received may say more about the likelihood of cuts to the defense budget than the Arizona Republican's tough talk. So, perhaps, does Murray's refusal to discuss it.

Last month, Patty Murray was awarded a bronze statuette featuring a little boy with a big smile on his face, running while holding a toy airplane aloft. Presented by the Aerospace Industries Association, a coalition of more than 300 defense and aerospace firms, the "Wings of Liberty Award" was given to Murray "in recognition of her longtime support of the aerospace and defense industry," reads the organization's press release. According to Jim Albaugh, the executive vice president of America's second largest defense contractor, Boeing, and the chairman of AIA's Board of Governors, "Senator Murray knows the value of the aerospace and defense industry."

That "value" was clearly evident in an AlterNet analysis of the supercommittee's financial ties to the defense industry and Murray's in particular.

While corporations can't directly donate money to candidates, their political action committees, officials, representatives and the immediate family members of the latter do. All members of the Joint Select Committee on Deficit Reduction have received significant contributions from the defense sector since 2007, according to data compiled by the Center for Responsive Politics. For the Republicans, donations from the industry to their campaign committees and their so-called leadership political action committees (used by politicians to help fund other candidates' campaigns in order to gain influence in Congress) added up to $321,000. For the Democrats, the collective haul was more than $1 million.

Murray's individual take in defense industry donations since 2007 is greater than the combined total of the top four supercommittee Republican recipients.

An analysis by AlterNet further found that more than one-third of Murray's top 100 donors during the 2010 election cycle were defense contractors who collectively signed $57.5 billion worth of deals with the Pentagon last year.

No member of the supercommittee, and no lawmaker in all of Washington, DC, received more donations from Boeing than Murray. Of the $3.2 million the defense giant dispersed to lawmakers in 2009-2010, the Washington Democrat received $85,860, a full $20,000 more than was donated to the next two largest congressional recipients of Boeing money combined, according to data from the Sunlight Foundation.

Senator Murray refused to respond to multiple requests by AlterNet for information and clarification about her ties to the defense industry and her acceptance of the Wings of Liberty Award.

In addition to the large sums of money that regularly flow from defense contractors to members of Congress, the Aerospace Industries Association has also recently kicked off a lobbying campaign aimed at average Americans. Dubbed "Second to None," the industry effort is an attempt to mobilize people to pressure their representatives to reject cuts to defense spending. Playing on fears of terrorism and the loss of manufacturing jobs, the campaign is far from subtle. "American leadership in aerospace and defense is being threatened by forces in Congress and the administration. The security of our troops, our technological future and our economic stability are all at risk. We must preserve jobs across the nation that keep our nation strong. Join us and act now before it is too late," its website warns.

In an article on Second to None for the Huffington Post, Dan Froomkin notes that, in reality, "the U.S. spends more on defense than the next 17 top-spending countries combined, according to figures compiled by the Stockholm International Peace Research Institute." He goes on to quote long-time Pentagon watcher Winslow Wheeler who told him, "The rhetoric and hysteria about these levels [of budget cuts], compared to what they are, is really quite stunning."

But the reasons for the scare tactics are clear enough. AIA's executive committee boasts not only Boeing's Jim Albaugh, but Robert Stevens, the chairman and chief executive officer of the largest U.S. defense contractor, Lockheed Martin and top corporate executives from other Pentagon power-players include Northrop Grumman, BAE Systems, General Dynamics, General Electric, and Raytheon. All of these firms have ties, through contracts in the state or district, and/or donations to members, of the supercommittee.

When asked if the Aerospace Industries Association was engaged in any special lobbying efforts geared toward the Joint Select Committee on Deficit Reduction, Alexis Allen, a spokesperson for the trade group told AlterNet by email: "We are providing information to everyone on the hill, including members of the supercommittee, about the impact of the budget act on the industrial base."

The Wind Beneath Her Wings

Bestowed annually by the Aerospace Industries Association to a member of Congress, the Wings of Liberty Award has been presented to 39 legislators over the years, but only once before was the recipient a woman.

Murray did not respond to questions from AlterNet about her selection, whether she had qualms about accepting the award, given her position on the supercommittee, nor the perception of a potential conflict of interest.

When asked how Patty Murray was chosen for the industry prize, the AIA's Allen told AlterNet that the trade group identifies "members of Congress who have made significant contributions to the aerospace industry, and have reflected credit upon America and themselves," and from that list a selection committee chose the Washington State Democrat. Asked if Murray's position as co-chair of the Joint Select Committee on Deficit Reduction had anything to do with the selection, Allen said in an email to AlterNet, that the decision was made "prior to the budget act and creation of the supercommittee."

Murray has never issued a press release regarding her industry honor. No reference of her acceptance of the prize has appeared on her website. Nor did the national press offer any coverage of the supercommittee co-chair receiving an award from an industry at the same moment she is one of 12 legislators deciding the economic fate of that sector for the next decade.

Jon Kyl may talk tough about defense spending, but after more than two decades in Congress (and even after announcing plans to retire in 2012), the Aerospace Industries Association has never given him an award. That the AIA bestowed its annual prize on Patty Murray this year raises questions not of quid pro quo but of a long, close relationship, cemented by large amounts of money, between her and the defense industry.

For the moment, at least, Murray is providing no answers.