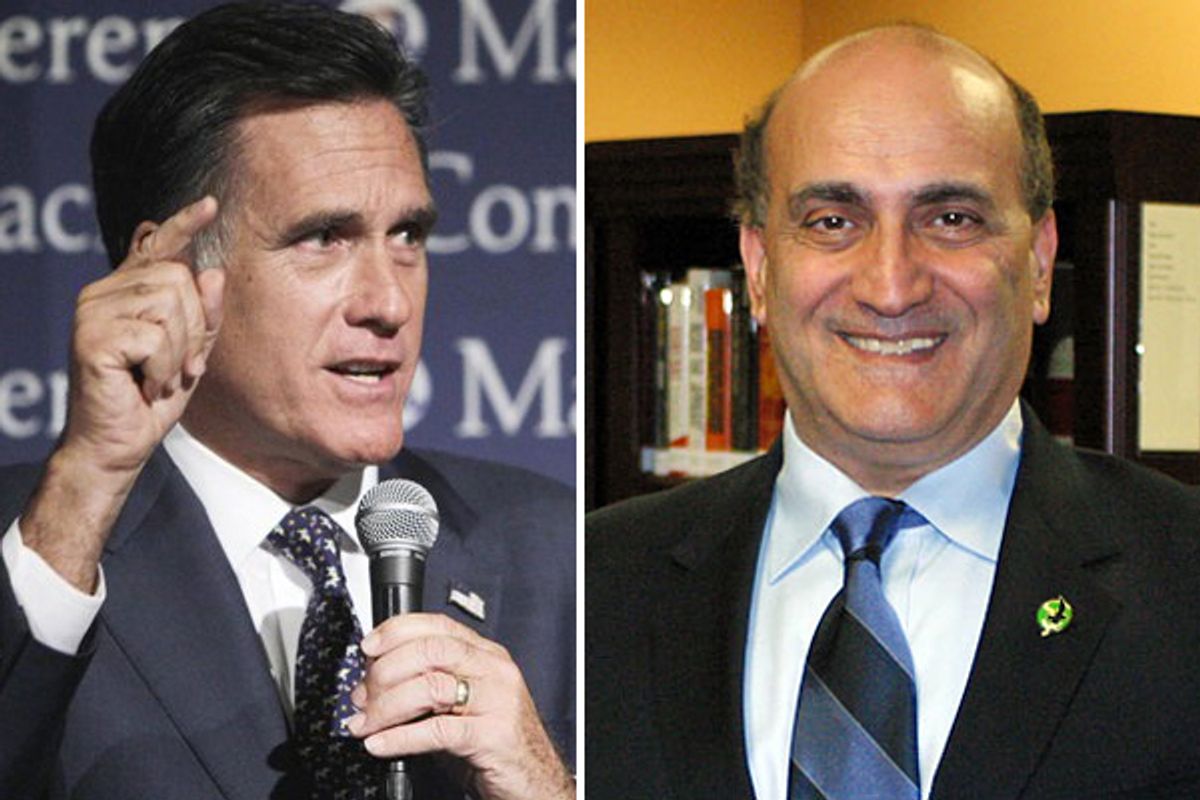 Mitt Romney has a new foreign policy adviser. His name is Walid Phares, a Lebanese -American contributor to Fox News, and rising star in Republican punditry. Phares has had three careers and all are relevant in bizarre ways to the U.S. presidential campaign.

Phares' first career began early in the Lebanese civil war of the 1975-1990 when he allied himself with the right-wing militias, armed and financed by Israel. In his official curriculum vitae, Phares describes himself as a writer and lawyer in Lebanon at this time but he was more and less than that. He assumed a political position in the hierarchy of the militias and founded a small Christian party in the late 1970s and early 1980s.

After Genral Michel Auon assumed the presidency of Lebanon in 1988, Phares joined the right-wing coalition known as the Lebanese Front, which consisted of various sectarian groupings and militia. The Front backed Gen. Auon in his struggles against the Syrian regime of Hafez al-Assad and the Muslims of Lebanon. Phares's role was not small, according to Beirut newspaper accounts.. He served as vice chair of another front's political leadership committee, headed by  a man named Etienne Saqr, whose Guardians of Cedar militia voiced the slogan "Kill a Palestinian and you shall enter Heaven." (Saqr later moved to Israel, and then Cyprus.) The Front was also backed by Iraqi president Saddam Hussein, a bitter foe of the Syrians. It seems unlikely that Romney knew much about this chapter in Phares’ career when he tapped him as an advisor.

After Saddam’s invasion of Kuwait in 1991, the United States and Syria came to an agreement about the need to get rid of Gen. Auon, and his forces were routed. Phares resurfaced in Florida in where he began a second career as an academic “expert on terrorism."  He obtained a PhD at the University of Miami and seemed to model himself after conservative writer Fouad Ajami, but without Ajami's claims to scholarship. I remember attending the founding meeting for the Lebanese Studies Association in the 1990s Phares entered the room hoping to become a member. Once people knew who he was, the hostile glances were sufficient to drive him out.

Before long he became a favored Middle East expert in U.S. media. With an Arabic name, he came come across—to the ill-informed viewer—as an “indigenous expert.” He even sprinkled his English commentary with Arabic words. His shtick was not exactly original. He reliably articulated Israeli definitions of “terrorism," in which indiscriminate violence against civilians, even the killing of children, when perpetrated by Israel, do not qualify.

In 2006 Phares left Florida Atlantic University and moved to Washington where he launched a third career as policy entrepreneur. He set up shop at at neoconservative Foundation for the Defense of Democracies and started teaching at the National Defense University. His views appealed to the Bush administration, and he became a an expert witness in the courts and the Congress, as well as contributor to Fox Nes.

He also became a regular on Arabic news channels, mostly on Lebanese right-wing news channels, but also on channels controlled by the Saudis. He has even made appearances on Aljazeera. But there is a curious difference in Phares’ commentary for the Arab media. On Arab TV, he speaks cautiously and does not make outlandish claims about Islamic terrorism. For all his pro-Israeli statements in English, he never articulates them in Arabic.

Phares' writings do not deviate much from the genre of terrorism literature. During the Cold War, experts in Washington, DC sought to show that terrorism around the world was linked to the Soviet Union. In the post-Cold War era, terrorism experts effortlessly switched to a new argument: that Islam was the real threat to “Western civilization.” Toward that end, Phares can find—or concoct—links between very different Islamic groups. In his analysis, Hezbollah, Hamas, and Al-Qaeda amount to one global organization.

The appointment of Phares to a position in the Romney campaign is not surprising. In years past, such an appointment would have been considered extreme and cast doubt on the wisdom of the candidate-- but no more. Middle East policymaking is now dominated by the Israel lobby and its affiliates. Advocacy of Israeli positions has replaced professional qualifications as the criteria for service.

It was ironic that the initial news reports about Romney's foreign policy team referred to Phares as a “scholar." Phares has not been seen in Middle East Studies conferences for many years. His writings are only relevant to Zionist discourse and polemics. But such is U.S. presidential politics: when the appointment of Israeli experts on terrorism is not possible, a man like Phares is the second best choice.

As`ad AbuKhalil is professor of political science at California State University, Stanislaus and Research Fellow at the Center for Middle Eastern Studies at the University of California, Berkeley. He is the author of "Bin Ladin and Taliban: The New American War Against Terrorism"