The folly of a Chinese trade war 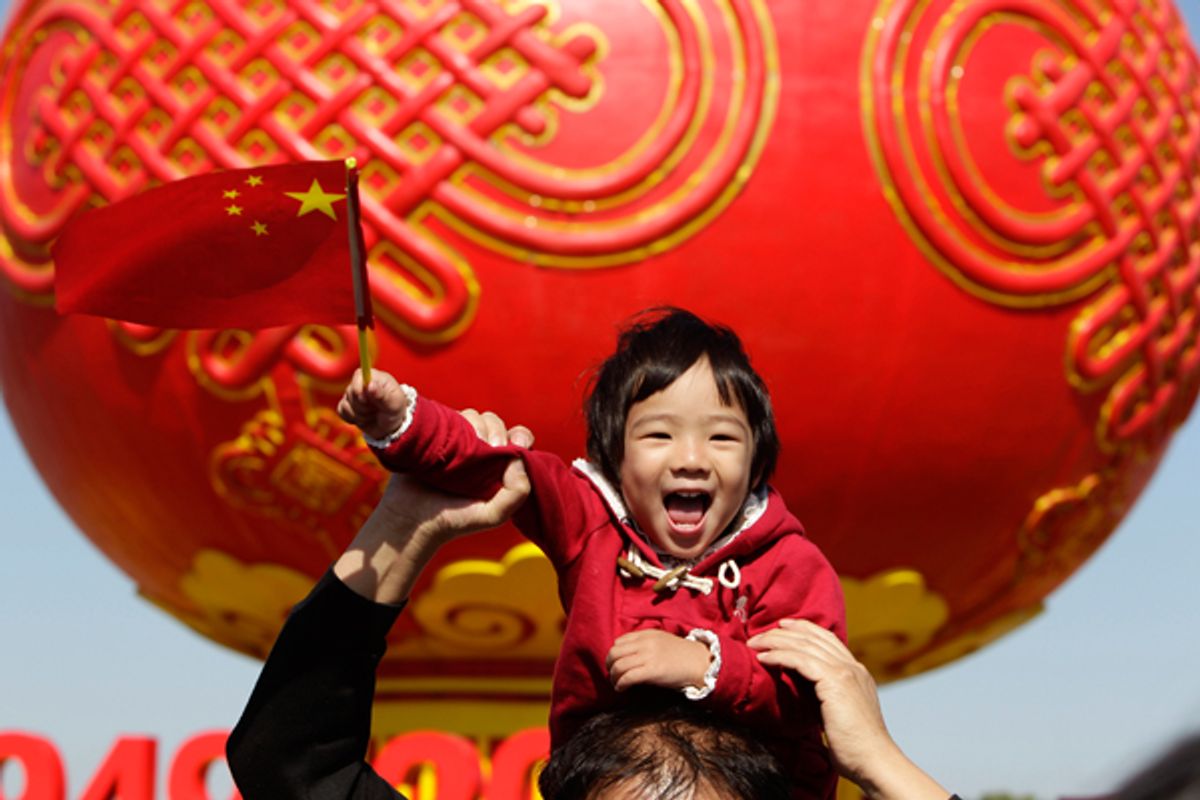 A child poses in front of a giant red lantern on display at Beijing's Tiananmen Square on China's National Day. (Reuters/Jason Lee)
--

Moments before China successfully launched its Tiangong "Heavenly Palace" space lab on Sept. 29 -- a key step toward the goal of a manned Chinese space station in orbit by the end of the decade -- China's largest television network broadcast a 90-second long animation describing the spacecraft's journey into orbit, with the uplifting music of "America the Beautiful" as soundtrack.

Some observers considered the juxtaposition a howling blunder; others regarded the move as a calculated insult from a rising superpower to an empire in decline. But whatever the real story, of one thing there could be no doubt: In the same year that the United States retreated from space, shutting down its Space Shuttle program, China declared that the sky would be no limit to its own ambitions.

A half century ago, when the Soviet Union launched the Sputnik satellite, the U.S. responded with a massive drive to improve science education and get a man on the moon. This time around, the most obvious American response to China's ambitions can be found in the U.S. Senate's attempts to start a trade war, based on the accusation that China is unfairly manipulating its currency to the detriment of the U.S. economy. A procedural vote on a bill that would require the U.S. to impose unilateral tariffs on Chinese goods if China was guilty of manipulation (which it is) passed on Thursday. A vote on the bill itself is scheduled for next Tuesday.

Make no mistake: The Chinese yuan is definitely undervalued, and there are very good reasons to believe that a readjustment would be in the best long-term economic interests of both China and the United States. A stronger yuan would reduce the ballooning trade deficit between the two countries, likely resulting in faster job creation in the U.S. and increased domestic demand in China. These are things both sides want desperately.

So what the argument really is about is the speed of appreciation. China intends to move slowly, for the understandable reason that a sharp, rapid change in the value of the yuan could cause massive economic disruption, throwing millions of Chinese whose jobs are in the export sector out of work, and putting in grave jeopardy any chance of a stable transition to domestically driven economic growth. China wants patience: Put a few years of 7 percent appreciation together, back to back, and the yuan will no longer be significantly undervalued.

The calculus for U.S. politicians facing an oncoming election with a backdrop of 9 percent employment is quite different. They want a sharply faster upward revaluation, and if they don't get it, they are threatening to impose tariffs on Chinese goods.

That's a dangerous strategy, as even the most unlikely pair of bedfellows imaginable, House Speaker John Boehner and liberal economist Joseph Stiglitz, would both agree. Because China is unlikely to respond to trade war threats by simply backing right down and throwing its own economy into turmoil, a point that some of the more vociferous advocates of action, like Paul Krugman, routinely appear to downplay. A far more likely outcome -- particularly from a rising superpower feeling its oats -- will be that China decides to engage in some tit-for-tat retaliation. As economist Kash Mansouri notes, this could take multiple forms: eschewing Boeing jet purchases in favor of Airbus, or targeted tariffs, or a sudden cooling toward American foreign investment in Chinese enterprises.

Whatever happens will likely have some negative economic impact on the United States -- so there's a very real chance that the Senate's strategy could backfire and result in even more job loss. We can't be certain, and it clearly doesn't mean that the U.S. shouldn't be exerting steady diplomatic pressure for faster reevaluation, but we should also be careful what we wish for. Trade wars can end up hurting both sides, and right now, the Chinese economy is one of the few things holding the entire global economy upright -- according to Bloomberg Businessweek, China accounted for 40 percent of global economic growth between 2008 and 2010.

In fact, the best possible outcome for workers in the developed world is continued strong economic growth in China. Because there are already signs that rising labor costs in China are resulting in "re-shoring" -- the return of jobs from overseas back to the U.S. and Europe. Who knows -- maybe China will eventually end up outsourcing some of its space program manufacturing back in the U.S....