The "nuclear" politics of stalled unemployment

The jobless rate is stuck at 9.1 percent as Obama and his fellow Democrats take extreme (for them) measures 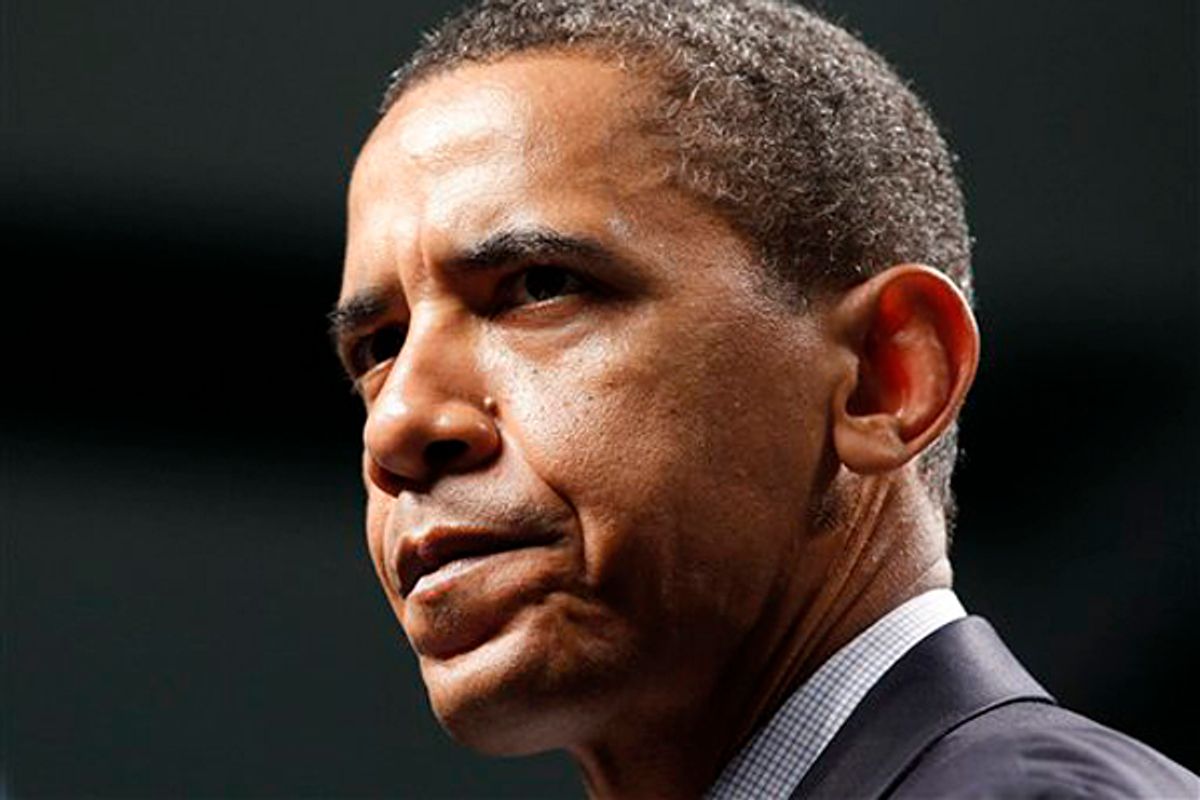 The news this morning is that more than 100,000 new jobs were added in September, even as the unemployment rate remains stuck at 9.1 percent, where it's sat for three straight months. This is better news than had been expected, and it builds hope that the country will avoid a new recession. The freshly-released data shows that 137,000 new private sector jobs were created, a number that was partly offset by a reduction of 34,000 public sector jobs, mostly at the local level.

Still, the bottom-line remains troubling: Long-term unemployment is increasing and job creation needs to happen at a far higher rate for unemployment to begin dropping substantially. Plus, the depressingly familiar qualifier applies: The real jobless rate, when you account for those who have simply stopped looking for work, is much, much higher. And the prospect that turmoil in Europe will cause further distress here remains very real.

More than anything, it is this steady repetition of anxiety-generating economic news that has put President Obama at risk of losing his own job next year, and potentially taking down even more congressional Democrats with him. But while this morning's headline is pretty much what we've come to expect from the first Friday of every month, there is something new and different about the context of this month's jobs report: This time, Obama and the Democrats can say they're doing something -- or at least trying to do something -- about it.

This is the first release of new unemployment data since Obama delivered his post-Labor Day speech in which he outlined his $447 billion jobs bill and demanded that Congress take it up immediately and hold a straight up/down vote on it. The president's clear shift in posture has been duly noted: His plan does not represent an opening bid for a compromise with congressional Republicans, but rather a recognition that the GOP is fundamentally uninterested in compromising with him, and now he's barnstorming the country in an effort to shame them into action -- or at least convince Americans that there's only one party of obstruction in Washington these days.

For months before now, Obama has been on the defensive every time new unemployment data has been released, with Republicans tormenting him with "Where are the jobs?" taunts. This has left Obama pleading for patience, or pointing to small signs of incremental progress, or issuing generic calls for bipartisan action, or hopelessly trying to convince a skeptical public that things would be much worse if it hadn't been for "the Recovery Act" (even if this is true). This time, though, the news could actually be of service to him, ratcheting up the urgency in his demands that Republicans take action on his jobs plan, or explain exactly why they don't want to. As he put it in his press conference yesterday:

“If Congress does something, then I can’t run against a do-nothing Congress. If Congress does nothing, then it’s not a matter of me running against them. I think the American people will run them out of town, because they are frustrated, and they know we need to do something big and something bold.”

Of course, a handful of Obama's fellow Democrats in the Senate have done him no favors on this front, balking at embracing his entire plan. The objections have come from oil state Democrats, who don't like his call for ending tax breaks for the industry, and from "centrists" like Ben Nelson. Mitch McConnell, the Senate's Republican leader, has sought to exploit this reluctance by forcing a vote on the package this week, the idea being that it would allow Republicans to claim that Obama's own party -- and not the GOP -- had prevented his plan from being adopted by the Senate.

But Democrats may be getting their signals straight, with Senator Chuck Schumer brokering a compromise to substitute a 5 percent surtax on millionaires for the tax provisions that prompted objections. That hasn't yet brought every Democrat in the chamber on board, but it may. And Majority Leader Harry Reid showed last night just how interested he is in denying McConnell and the GOP the talking point they're looking for, using a mini-version of the "nuclear option" to prevent the GOP from forcing a potentially embarrassing vote. TPM's Brian Beutler helpfully translated the impossibly dense language of Senate procedure into understandable English:

After going back and forth for a couple rounds, detailed here and here, everything seemed to be set in stone. McConnell wouldn't get his vote on Obama's jobs bill directly, but he would use his prerogatives under the Senate rule to force a vote on what's known as a "motion to suspend the rules" -- an arcane tactic that requires a two-thirds vote for passage, and was destined to fail. McConnell, though, wanted this procedural vote to serve as a proxy for Obama's jobs bill. If it failed, and if Democrats voted against it, Republicans could say Obama's jobs bill went down with bipartisan support -- a talking point they could use for months.

McConnell had the Senate rules on his side. His motion, however mischievous, was ruled in order. The stage was set for a vote. That's when Reid whipped out an ace he's had up his sleeve since he became majority leader -- one that his liberal critics wish he'd used two years ago to end the filibuster and ram the Democratic agenda through the Senate without having to contend with frustrating supermajority requirements. Reid and 50 of his Democrats simply voted to overrule the parliamentarian's decision that McConnell's motion was in order. Presto, McConnell's motion could not come to a vote, and Reid had avoided a political embarrassment -- and eliminated a very small minority right in the Senate.

The upshot is that Senate Democrats managed to avoid the vote Republicans wanted to force, and it's possible that they'll soon be able to pass their own bill (with the new surtax) -- something the White House has indicated it would be fine with and that would presumably have no trouble passing muster with Democrats in the House. In other words, Reid went to rather extraordinary lengths to protect Obama's ability to tell the public that Republicans, and Republicans only, are standing in the way of enactment of a new jobs plan that credible economists say will lower unemployment and spur growth.

Reid's maneuver last night was certainly clever, but whether it will mean anything to the public is an open question. At the very least it does show that Obama's more aggressive jobs posture may be bleeding over to the Senate. Still, as Beutler noted, there could be a serious unintended consequence here: McConnell and his fellow Republicans are fuming, and there's a decent chance they'll be running the Senate come January 2013. Reid set a narrow new procedural precedent last night, but who knows if a GOP majority would simply decide to go a step or two further, and wipe out all filibusters?