Financial firms have given millions of dollars to the department, raising the ire of Occupy Wall St. protesters 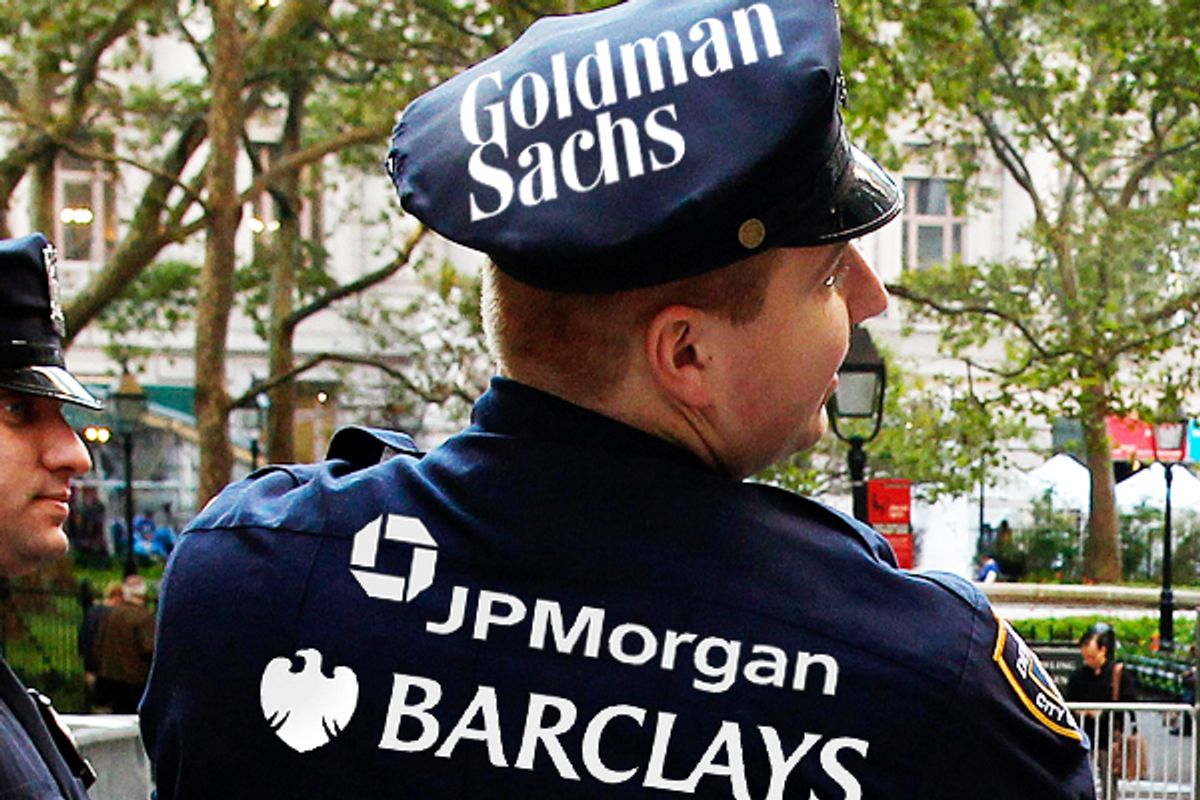 "NYPD! NYPD! JP Morgan doesn't give a f*ck about you!"

That was the chant of a crowd of protesters during one of the tenser moments Wednesday evening as police tried to corral the occupiers of Wall Street and force them to stay in the confines of Liberty Square. It is a reference to one of the rumors I've heard again and again at the protests: That JPMorgan Chase gave a multi-million dollar donation to the NYPD as the protests were starting in mid-September as a kind of incentive for the police to aggressively crack down on the occupiers.

As it turns out, that version of the rumor isn't quite correct. But Wall Street finance firms have funnelled millions of dollars into the police department, in an arrangement that critics say compromises the NYPD.

Here's what we know:

JPMorgan gave a massive gift of $4.6 million to the New York City Police Foundation in the form of money, patrol car laptops, "security monitoring software," and other tech resources. But the donation was given starting late last year and was completed by spring 2011, so it was obviously not made in response to the Occupy Wall Street protests. At the time, Commissioner Ray Kelly sent JPMorgan CEO Jamie Dimon a note expressing his "profound gratitude" for the donation, and a company-written news item about the gift described it as "unprecedented" in size.

The police foundation is the private fundraising arm of the NYPD. It allows donors to make tax-exempt gifts to the department and in turn the foundation funds a wide-range of specialized NYPD units, international counterterrorism work, and high-tech gadgetry.

"This gift is especially disturbing to us because it creates the appearance that there is an entrenched dynamic of the police protecting corporate interests rather than protecting the First Amendment rights of the people," says Heidi Boghosian of the National Lawyers Guild, which has had legal observers posted at the major Occupy Wall Street marches. "They've essentially turned the financial district into a militarized zone."

As I reported this week, the police presence at the union solidarity march in support of Occupy Wall St included many hundreds of officers, scores of cruisers, vans, and buses, at least one mobile surveillance tower, and at least three helicopters. Kelly said this week the department has spent $2 million on overtime for officers since Occupy Wall Street began in mid-September.

As it turns out, JPMorgan is not the only financial institution that has been generous to the police foundation. In the 2009-10 year, Goldman Sachs, Barclays Capital, investment bank Jeffries and Co., investor Carl Icahn, and investment firm The Renco Group each gave over $100,000 to the foundation, putting them in the top-tier of donors, according to the foundation's website. Bank of America also gave over $75,000 that year. (Another $100,000+ donor was Rupert Murdoch's News Corp.)

Keep in mind that's just a single year's worth of donations. As a private non-profit, the New York City Police Foundation does not have to release detailed donor information, so we don't know of the the full scope of Wall Street money flowing into the NYPD.

The foundation has previously received scrutiny from the press for, among other things, spending tens of thousands of dollars for food and liquor for Commissioner Ray Kelly at the posh Harvard Club, as well as hiring a pricey publicist to promote Kelly in the press.

The NYPD and the police foundation did not return calls for comment. A JPMorgan spokeswoman declined to comment.