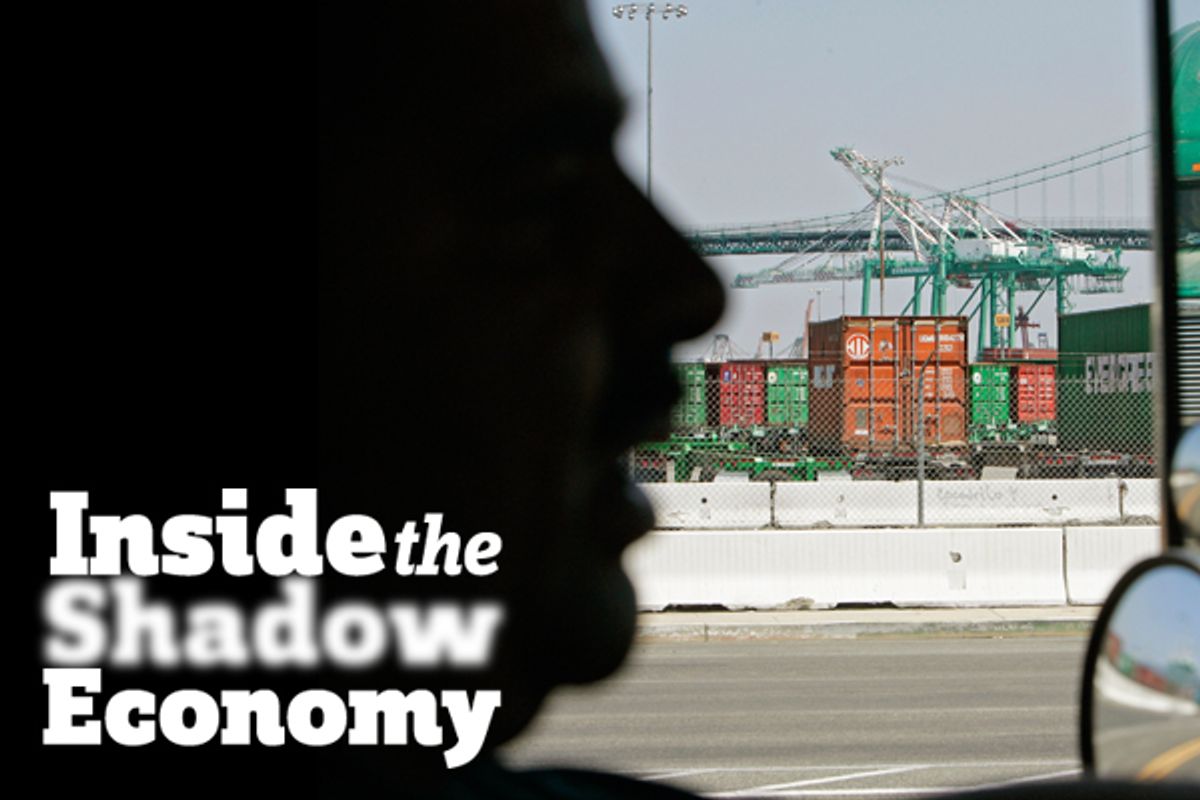 A truck driver is silhouetted as he drives his truck to the port of Long Beach, Calif. (AP/Ric Francis)
--

Leonardo Mejia is a truck driver at the Port of Long Beach, Calif. He's worked at the port for 10 years, a vital cog in the infrastructure that moves cargo containers between ships and warehouses and other transport networks. He used to own his own truck but was forced to sell it when he couldn't afford to fix its engine. Today, Mejia leases a truck from a company called Shippers Transport Express, a subsidiary of the massive container shipping terminal operator SSA Marine.

It's a good deal for Shippers -- Mejia has to cover the costs of his own health insurance, maintenance on the truck, and diesel fuel -- but not so great for Mejia. Although he works exclusively for Shippers Transport Express, according to his employer he's an independent contractor, with no safety net to protect him from misfortune except for whatever scraps he can carve out from his barely subsistence level wages.

He misses his old truck.

"Every day is getting worse," says Mejia. "Before when we used to have our own trucks, every time we have a problem with a dispatcher or the owner of a company we just take the name of the company off our truck and we go to somewhere else. Right now we don't have nothing to take with us. Except maybe my clipboard."

Mejia is part of the shadow economy, though not in the sense that that term is commonly understood: as an autonomous netherworld entirely off the books and underground, invisible to the taxman and mainstream society. Mejia's shadow economy is something a little different; purposefully created from the top down, its growth driven by employers increasingly eager to shed costly, legally mandated commitments to their employees.

Full-time employees are expensive -- employers have to cover things like payroll taxes and workers' compensation. By classifying -- or misclassifying, as critics of the practice label it -- their employees as independent contractors, employers escape all those profit-crimping expenses.

A world of freely operating independent contractors is a libertarian utopia, and there are some corners of the economy -- notably Silicon Valley -- where the dream approximates reality, at least on the high end. But on an economy-wide scale, the calculated misclassification of employees as independent contractors is a nightmare for workers. It removes the normal protections employers are legally required to give their employees without offering any real freedom in exchange. The practice is also a disaster for governments struggling to balance their budgets, depriving both federal and state governments of billions of dollars in tax revenue.

On the surface, the growing incidence of independent contractor misclassification and other efforts by employers to shortchange their employees -- paying less than the minimum wage, skimping on workers' comp, refusing to pay overtime -- would appear to support the conservative explanation of why the shadow economy is growing: Companies are attempting to escape the burdens of "high" taxes and "excessive" regulation. In other words, the bigger and more intrusive the government, the bigger the shadow economy.

But a closer look at the situation of port truck drivers like Leonardo Mejia reveals that the truth is far more complicated, and far less a consequence of the size of government, than the stock conservative analysis suggests. In the trucking industry, deregulation has played at least as large a role as labor law regulations in prompting the remorseless squeezing of workers. No less important are the cost pressures induced by globalization -- truckers like Mejia are tiny, vulnerable links in vast global supply and production chains dominated by huge multinational corporations. In a competitive landscape where everyone is constantly striving to reduce costs, workers like Mejia end up crushed.

"There's an imbalance of power in the market," says David Bensman, a professor of labor studies and industrial relations at Rutgers University and co-author of "The Big Rig: Poverty, Pollution, and the Misclassiﬁcation of Truck Drivers at America’s Ports," "which enables the big shippers to control the cost of shipping. And as long as you have that imbalance of market power you are going to have intense competition and substandard industry practices."

Examples of employers attempting to stiff employees to boost their own bottom line are easy to find. A Labor Department report in 2000 determined that 30 percent of all U.S. employers had misclassified some employees, and the practice appears to be accelerating.

Some incidents are more egregious than others. In the annals of stupid greed, it's hard to top the antics of the Orange County husband-and-wife team of roofing contractors Michael Vincent Petronella and Devon Lynn Kile. In November 2010, the couple were sentenced to 10 years in prison for the worst case of workers' compensation fraud in the history of the state of California. Petronella and Kile vastly underreported their payrolls to the State Compensation Insurance Fund and then, when their uninsured workers got injured on the job, filed fraudulent claims for workers' comp. Meanwhile, the couple owned a Bentley, two Ferraris and a Range Rover, and spent more than $2.1 million on their American Express credit card in just two years. State investigators also discovered that Kile had applied to join the cast of "The Real Housewives of Orange County."

But Petronella and Kile's excesses may well be less reprehensible than the the case of Cecil Parker, a former city councilman and local contractor in the town of Anahuac, Texas. In the aftermath of the devastation wrought by Hurricane Ike on coastal Texas in September 2008, Parker managed to finagle himself a $1.4 million public grant to clean up the debris. He hired 57 workers to haul away the junk, but instead of treating them as full-time employees, Parker designated them all as independent contractors.

He didn't get away with it. In July 2011, the Department of Labor's Wage and Hours Division announced that it had successfully recovered $104,837 in back wages from Parker for the workers, on the grounds that he had not been paying them the overtime wages required under the Fair Labor Standards Act.

A study by two UC Berkeley researchers on Fraud in Worker's Compensation Payroll Reporting in California tied the growth in fraud directly to higher insurance costs -- and noted that, ironically, the fraud ended up pushing overall premiums even higher.

Again, the Berkeley study can be used to support the argument that onerous government regulations are motivating bad behavior -- although it should be noted that in California, workers' compensation rates, overall, have been falling for eight years even as labor law violations continue to grow.

But the specific case of port truck drivers tells a different story. According to Bensman and other experts on the history of the American trucking industry, such as Wayne State University's Mike Belzer, the deregulation of the trucking industry that began during the presidential administration of Jimmy Carter was the true catalyst for the rise of the bogus, exploited independent contractor.

Before deregulation, says Bensman, trucking rates were set by the government. After deregulation, rates were set by the market, and the entry of hundreds of new non-union trucking companies into that market inevitably pushed those rates down. This was excellent news for the companies that needed to ship goods, as well as for the consumers who ended up purchasing those goods at Walmart or Target, but it was a disaster for the truckers. According to Belzer, real wages for all truckers have fallen by 30 percent since 1980.

The big shippers now have all the power, observes Bensman. Wal-Mart routinely requires all its suppliers to lower their prices year after year, and that pressure inevitably trickles down to the small trucking companies that perform such services as port transport. These are the companies that typically have been eager to move to an independent contractor relationship with their employees -- it's just another way to cut costs enough to keep them viable in an industry dominated by huge players benefiting from vast economies of scale.

The picture emerging from our analysis of driver surveys done by prior researchers and industry reports is of an underground economy. Fierce competition, ever-increasing service requirements, a contingent workforce, poverty level wages, no health care coverage, rampant safety violations, ineffective or illusory enforcement -- these are the rules of the industry.

To its credit, Obama's Department of Labor has been actively striving to address the misclassification of independent contractors by stepping up enforcement and inspection efforts. Just two weeks ago, the IRS and Department of Labor signed a memorandum of understanding "that will improve departmental efforts to end the business practice of misclassifying employees in order to avoid providing employment protections."

But the ongoing budget showdown has hamstrung the Obama administration's efforts, offering a classic illustration of how Republican ideological opposition to government spending actually makes government finances worse. In 2009, the Government Accountability Office reported that misclassification has cost the U.S. government $2.72 billion. In February, the Obama administration requested $46 million to pay for misclassification enforcement inspectors. After the long summer of budget struggles, that request has since been lowered to $15 million, but the most recent appropriations bill for the Department of Labor drawn up by the GOP-controlled House doesn't even reference misclassification enforcement, while calling for sharp overall cuts to the Department of Labor budget -- cuts that would make it even harder to enforce the labor laws that currently still exist. (Calls to the Department of Labor to determine the current status of the misclassification enforcement budget request were not returned.)

At the state level, there are several legislative initiatives underway that could help crack down on misclassification abuses. One bill, AB 469, "the Wage Theft Prevention Act of 2011," has already passed both the state Assembly and state Senate and is currently awaiting Gov. Jerry Brown's yea or nay.

So far Leonardo Mejia hasn't seen any sign of government pressure on the shipping industry in Long Beach, but he would welcome it, because the challenges faced by a struggling independent contractors who want to change the status quo are immense.