Our year of toilet training hell 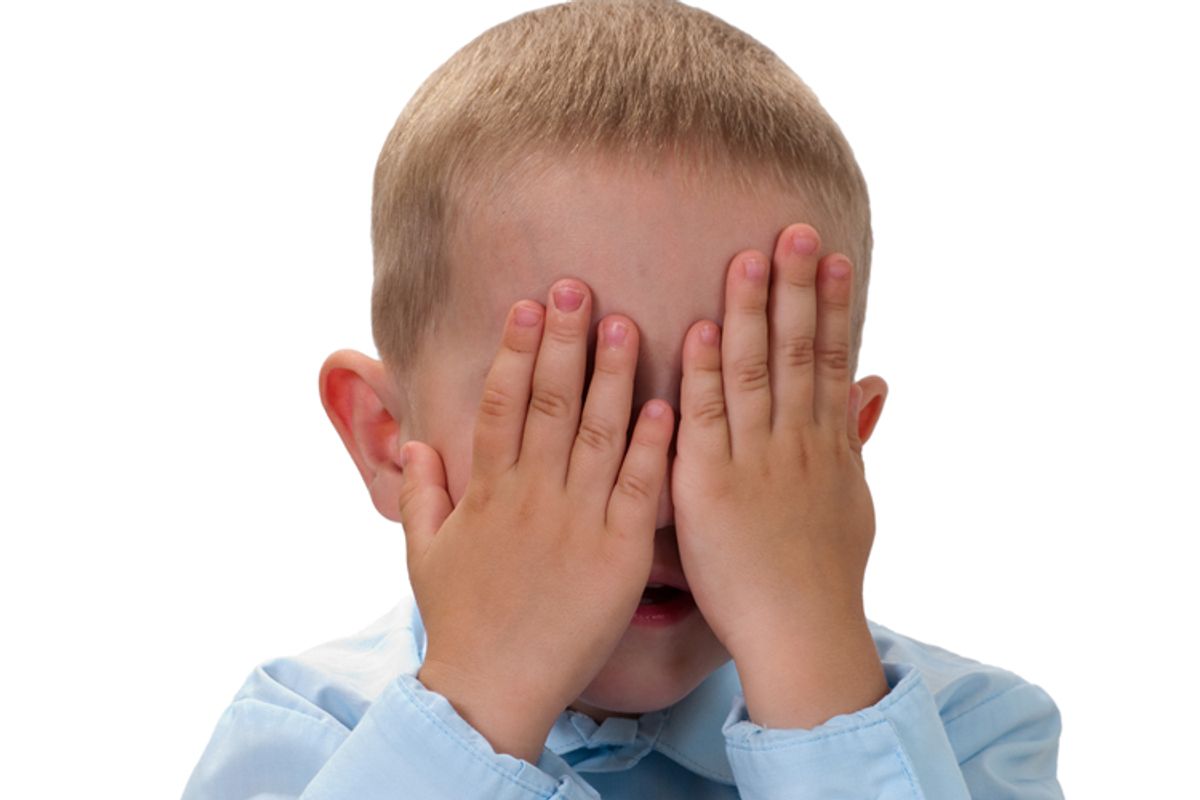 My 6-year-old son is amazing. I promise he's cuter and smarter and funnier than any 6-year-old you know. Even your own. He's just started kindergarten, and I'm pretty sure he's been chosen to give the commencement address already. He knows what five plus five is. And if you think that's too easy, he also knows what five plus six is. When I make a funny comment to him, he says, "Are you being sartastic?" My wife or I could correct that -- but why? Even his mistakes are cute. All of which is to say he's your normal everyday kid. He has tantrums some of the time, is selfish most of the time, and fights with his older brother all of the time.

Oh, also, one more thing you should know about him. He won't crap in the toilet. I hate to be so crass, but that's the fact of it. Peeing? Sure. Put him in front of a urinal, and he'll spray that toilet with his lack of aim. But "poop in the potty," as they say in the parenting biz? Not happening. Ever. When he needs to go, he asks for a pull-up, goes about his business, and then gets changed.

I don't remember exactly when it first happened. But if the subject of potty training was raised in his presence -- I'm sure the parenting books tell you never to mention potty training to your kid, but I could fill a large binder with my parenting "mistakes" -- he wasn't interested in it. Like me with the gym membership. I understand other people do it; I understand it's good for you and makes you feel better. It's just not for me. But this isn't your typical story of tough toilet training. This is a trip into the bowels -- no pun intended -- of hell.

Because not only did he refuse to go on the toilet, something worse started happening. One day my wife turned to me and said, "When was the last time he pooped?" I had no idea. I couldn't remember. (And yes, normally I could remember.) It had been days since I'd seen any of those plastic trash bags with the dirty pull-ups inside. (Destroying the environment one day at a time!) Even when he asked for a pull-up, he hadn't actually deposited anything inside. He was going on strike, like those prison inmates who stop eating because they want better food. My son was taking a stand. The only problem was, no one could tell us what his demands were.

What followed was a year of pure torture.

The first thing we realized was that toilet training was out the window. You can't train someone to go on the toilet when they won't go at all. As the days dragged on, still no poop. Five days, six days, nine days. His stomach became distended. He looked like Jackie Gleason. Our brother-in-law happens to be a pediatric gastroenterologist. No joke: The most convenient doctor of all time for us. He suggested we increase the Miralax laxative we were already giving him. Basically, blow the crap out of him and he'll get used to it. Sounded like a plan.

So we gave him more. And more. And yet, he still wouldn't go. I mean, this was one serious show of stubbornness. If it weren't so frustrating, it would've been impressive. If he could've channeled that willpower into something positive he could've invented the next iPad or something. Instead, he used it for evil. Well, not to be graphic, he actually was going, but only in drips and drabs so to speak, and without his knowledge. And the thing was, he was now regressing. He was wearing a pull-up all day. And when I say "a pull-up," I actually mean 12 of them, as we had to constantly change him thanks to the Miralax effect. The SpongeBob underwear passed down from his older brother was a relic of times gone by. Sometimes I'd catch a glimpse of a pair when I was grabbing some socks for him, and I could hear the mocking from SpongeBob himself. "He'll never wear me again!" in that annoying SpongeBobby voice.

But there wasn't anything cartoon-like about this. He was in pain. Constantly. He spent most of the time writhing on the couch, on the floor, on the bed, moaning. Always lying down, clearly working his hardest to not let anything out. But the longer he withheld, the more stomach pain he had. There were days we couldn't send him to school. The moaning became like torture. Not for him. For us. Imagine having someone in your living room playing the violin as horribly as humanly possible. And then imagine the violin is your son. It made me want to pull out my hair – and I don't even have that much left. Our other son couldn't even be in the same room with him. There were tears from everyone. Obviously we felt awful and wanted to help. But we were also 45 seconds from a nervous breakdown. We went back to our brother-in-law. He was as frustrated as we were. He had fixed cases like this thousands of times. But this was the most difficult case he'd ever had. Hooray for us! And hooray for him, because he was working for free.

This situation was particularly difficult for me, being the father. I felt it was my job to teach my boys how to do this. And let's be honest, men spend more time in the bathroom letting out what he was holding in than women do. I tried to explain the joys of this activity. If he only knew how many Pulitzer Prize-winning books I would never have read if not for that special time. Or the relief he would feel after a job well done. I found myself envious of a guy taking his dog for a walk. As the owner bent over to clean up the mess, plastic bag worn like a glove, all I could think was: That lucky bastard.

But my son would have none of it. He was scared. Of what, he couldn't say. Or he didn't like the feeling. Or he was trying, but nothing was happening. There was a different answer every day. He missed school, he couldn't go to play dates, and we were spending tons of money on wipes and pull-ups. When we went to Mexico on vacation, we put him in the pool wearing his bathing suit and three swim diapers to prevent any chance of leaking. And if somehow something did slip out, and the pool had to be evacuated, I'd already found the perfect kid to blame it on. Unfortunately, I never got the chance to point out that obnoxiously loud 3-year-old kid as a perpetrator.

So what did we do during this time to try to fix this? Pretty much everything. We played with the Miralax levels as if we were mixing crystal meth in a back alley lab. We yelled at him. We coddled him. We ignored him. We rubbed his stomach. We rubbed his back. We gave him medicine, which did nothing. We gave him a stronger laxative, which brought about the loudest screams of pain yet. We tried to rationalize with him. We tried to understand. None of it worked.

My wife and I would console each other by reminding ourselves that at least he wasn't sick; there was nothing seriously wrong with him. But when your kid's in pain 90 percent of the time for months, that rationale only goes so far. We had seen specialists in the field of encopresis ("it's all his brother's fault"), a psychiatrist or two for us ("he's obviously trying to hold on to something" -- really? You think?), and one for him, which didn't work because he was too young and also couldn't sit still due to the discomfort. There was no progress on the withholding. You'd think he had government secrets up there.

And then, imperceptibly, things started to change. The moaning receded. The pain lessened. He still had discomfort some of the time, but it wasn't a 24-hour nonstop moan-a-thon. And we noticed we were using fewer pull-ups. I'm sure CVS wasn't happy about the loss of income, but we were thrilled. And slowly but surely we made it back to where we had started. The holy grail of underwear returned. He still asked for a pull-up when he needed to go, but he now had a little more control. Things got back to normal, relatively speaking. We were so emotionally drained after the year from hell that we didn't care that he wasn't toilet-trained. I mean, when you summit Everest, you don't need to go climb another mountain right away, do you? We told ourselves we'd get to that later. Well, we're still getting to that.

I'm sure now is about the time people reading this think we're terrible parents, or maybe they thought that four paragraphs ago.  If we had only done X, he would never have withheld, and all would be peaches and cream, whatever that means. Well, here's what I say to them.

Just stop. We can't take any more advice. The only advice I ever give to parents, unless asked about something specific, is to ignore everything everyone else tells you. Everyone is an expert about your kid. Everyone knows the solution. Everyone can tell you exactly what you're doing wrong, especially your family. We have received more advice about this, solicited and not, than Dear Abby gives out in a month. We've conferred with "experts," read books (the poop book business is huge!) and been bombarded with every answer you can imagine. And the one thing we've realized? There is no one answer. If someone suggested one solution, somebody else would suggest the exact opposite five minutes later. When I searched the Internet, I could find nothing there we hadn't heard or tried.  The only thing I found helpful was the stories of the thousands of people going through the same thing. I especially enjoyed the ones who had it worse than we did. (Whatever, I'm a bad person.)

So where does that leave us? Right where the story started. But we are slowly moving forward. And I do mean slowly. He still wears a pull-up when he goes, but he's not allowed to do his business anywhere but in the bathroom itself. We're nudging him forward, while letting him feel he's leading the way.

And we've learned something obvious but important. That every kid is different. You can't tell me what will work for mine, and I can't tell you what will work for yours. It's easy to judge everyone else's parenting style. But after going through this, we don't -- at least not as much as we used to. There's no manual for this. No one loves going to the bathroom more than my other son. He was a dream to potty train. It's his favorite place. He literally reads entire books in there. But for some reason, that's just not the case this time around.

As my wife and I often remind each other when the other gets a little insane/panicked about it: We'll get through this. Someday we'll look back and … well, we won't laugh, but we'll look back. After all, by the time he's in college, this will all be a distant memory.

Though I should check if the Princeton student store sells pull-ups.

Josh Reims has been writing for television for the past 15 years. He lives in Los Angeles with his wife and two sons.