Though the Atlanta group didn't ask him to speak, the civil rights hero calls it "grassroots democracy at its best" 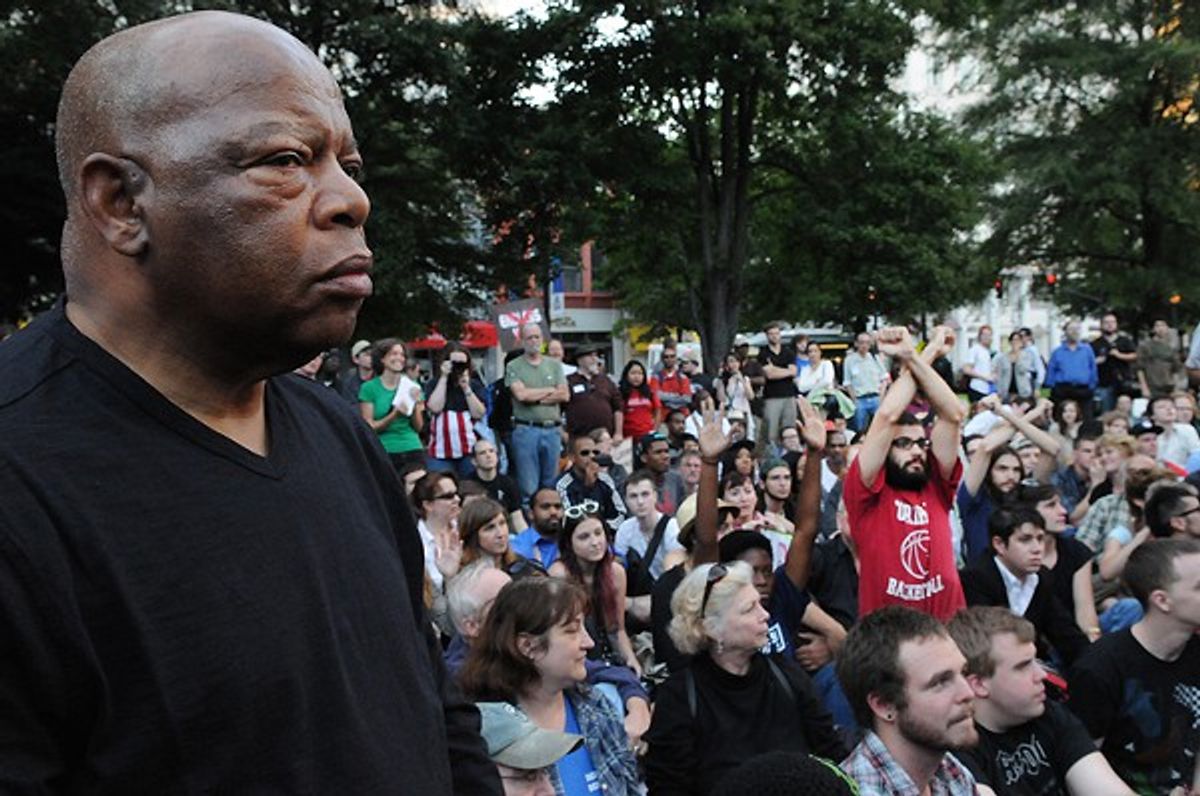 A YouTube video made its way around Twitter Saturday, showing the Atlanta offshoot of Occupy Wall Street in the middle of a General Assembly meeting, debating whether to ask Rep. John Lewis speak to the group. The answer was no, and the reaction on Twitter was almost unanimously negative: How could these people insult a civil rights hero that way?

I had the same reaction – until I understood what exactly occurred. It turns out Lewis came by, on his own, during a General Assembly meeting, to observe the group, and didn't ask to speak. One of the activists suggested that he be invited to say a few words, and most of the assembly seemed fine with that – until one of them, a guy identified as Joe, stood up and disagreed. While expressing respect for Lewis's work, he said the movement was "not about one individual" and it supported "no hierarchy." Because the group was in a planning session, someone suggested that Lewis speak at the end of their agenda, but the congressman had another event and couldn't stay.

I watched the video with growing frustration at what I perceived to be an insult to Lewis. But if you watched the whole thing, Occupy Atlanta has a process, like it or not, and the activists stayed true to their process. Everyone who spoke expressed respect for Lewis and a desire to hear him speak, but not in the middle of their planning meeting. By the time I finished the video, I could understand that.

Most important, John Lewis himself understood that. He noted he hadn't asked to speak, and he was happy to observe. "I support the protesters in New York and here," Lewis told Atlanta's Creative Loafing before leaving the park. "It is the right time and the right place to be... It is the will of the people. When I was young we did similar actions. It is grassroots democracy at its best. I think something good will come of the moment."

There's still an enormous amount of debate among progressives about what Occupy Wall Street and its many offshoots in other cities and even small towns is going to mean. On one extreme are OWS supporters who are implacably hostile to the political system, including even "progressive Democrats;" some disdain voting entirely. On the letters thread about my "Unions, Democrats and Occupy Wall Street" piece, several OWS supporters attacked my trying to understand the movement as the same as "co-opting" it; on Twitter someone actually argued that "the 99 percent" the movement so brilliantly says it represents doesn't include "the establishment." If every journalist and political leader who tries to learn from Occupy Wall Street is attacked for "co-opting" it, Occupy Wall Street will come to stand for something very much smaller than the 99 percent. It will be just another lefty circular firing squad.

On the other hand, I see too many committed Democratic Party adherents who are ready to write off OWS the minute someone does something they don't like. And the alleged "disrespect" of John Lewis provided that excuse for a lot of people. The point is, a movement leader like John Lewis understands that this movement is organizing itself. He's big enough not to look for disrespect where none is intended.

I hope both sides of this debate can extend the other some empathy, and that we all can extend it some time. The only people who benefit from our refusing to suspend our disbelief, for a while, are in the top 1 percent.

Here are two YouTube videos: The first shows the General Assembly debating whether to ask Lewis to speak; the second is Lewis talking to reporters and calling OWS "grassroots democracy at its best."