"A Thousand Lives": What really happened in Jonestown?

A new look at the largest mass suicide in American history 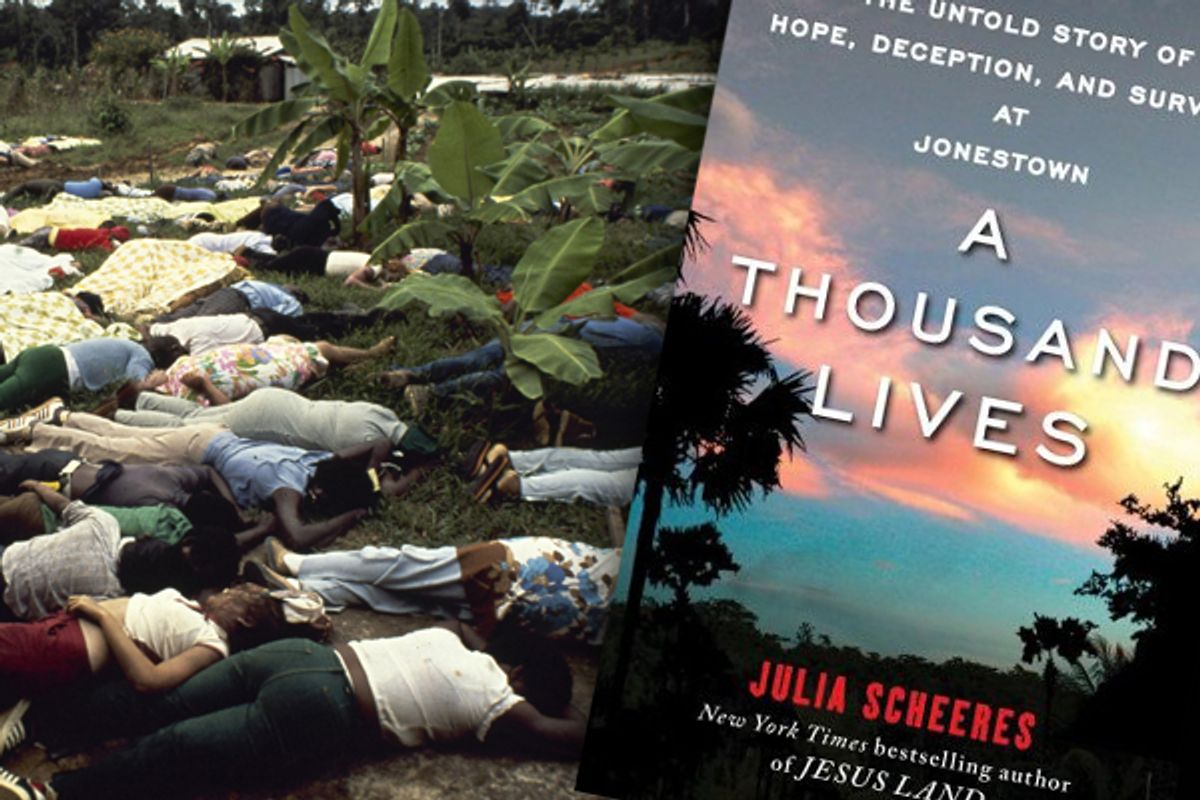 Were the deaths, in 1978, of more than 900 Americans in Jonestown, Guyana, a mass suicide or a massacre? And were the members of the Peoples Temple, who founded the settlement, the hypnotized victims of a cult dominated by a purely evil man? In the decades since the tragedy, as it recedes from popular awareness, scholars (and not a few cranks) have argued over the answers to these questions, obvious as they may seem to anyone who knows of the event primarily through the mass media. The latest entry in the discussion is "A Thousand Lives: The Untold Story of Hope, Deception and Survival at Jonestown" by Julia Scheeres, which looks at Jonestown from the perspective of the church's rank-and-file members.

Strictly speaking, this story is not "untold"; of the 100 or so survivors of Jonestown, a few have written their stories, and a compilation of oral and written firsthand accounts has been published. However, Scheeres used a large cache of recently released FBI files to write what she describes as the first "comprehensive history of the doomed community" to incorporate that material. She also conducted her own interviews with survivors. Above all, her account is notably levelheaded in a field where sensationalism, conspiracy theories and bizarre reasoning run free.

In particular, Scheeres wants to show that the people who died at Jonestown weren't "brainwashed zombies," as they have sometimes been described. She also deliberately refrains from use of the word "cult," a term currently in disfavor with students of comparative religion. To paraphrase the Yiddish linguist Max Weinreich (who said, "A language is just a dialect with an army and navy"), they argue that the only thing distinguishing many religions from so-called cults is that the religions have more numerous and powerful members.

For those unfamiliar with the story of the Peoples Temple, Jones was a charismatic Pentecostal pastor who, in 1950s Indiana, founded a church remarkable for its commitment to racial integration and aiding the poor. In the 1960s, he persuaded much of his flock to move to a community in Northern California and, in the 1970s, the church's headquarters was relocated to San Francisco. There, Jones continued to win converts from among the dispossessed -- drug addicts, delinquents, single mothers, the elderly and the unemployed, most of them black -- while also attracting educated idealists inspired by the mixture of spirituality and social justice that Jones called "apostolic socialism."

In its early years, the Peoples Temple did many good works: running soup kitchens and food and clothing drives, rehabilitating at-risk kids, nursing junkies through the agonies of withdrawal, providing free healthcare and services to seniors. Jones also proved adept at impressing radical-chic celebrities and local politicians -- the latter were particularly interested in the large blocks of obedient voters he could deliver. San Francisco Mayor George Moscone even appointed Jones to the Housing Authority, where his entourage of brawny bodyguards and cheering seniors made the meetings more exciting, if less functional.

From early on, Jones used charlatanry to gain followers and donations, figuring that he'd turn the usual revival-tent antics to the service of a "better cause." With the assistance of trusted aides, he staged assorted healings, mind-readings and other "miracles." He was indefatigable -- mostly because he was gobbling prescription drugs, stimulants known to produce paranoia in those who abuse them. Soon he was faking assassination attempts as well as healings, and threatening to kill enemies and apostates by supernatural means. Scheeres clearly believes that Jones' drug problems played a major role in the deterioration of the Peoples Temple from a progressive evangelical church into an authoritarian cult.

Scheeres may not want to use that word, or "brainwashed," but her own book demonstrates the need for stronger language to describe the Peoples Temple than "new religious movement," the "value neutral" term preferred by religious scholars. Jones and his lieutenants employed techniques of isolation, intimidation and coercion to control church members, former members and perceived enemies -- like the journalists who began asking too many awkward questions in 1973, prompting Jones to set up an "agricultural mission" in the small South American nation of Guyana. Many church members went to Jonestown for what they thought would be a few months, only to find themselves stranded in the middle of a dense jungle with no funds and their passports locked in a safe by church authorities.

As Jones' paranoia worsened and the ability of the community to sustain itself faltered, the residents -- effectively prisoners -- were subjected to starvation rations, public denunciations, beatings, grueling labor details and the interminable demented harangues Jones slurred into the PA system at all hours. During drills that were dubbed "white nights," Jones put everyone on alert, braced for military attacks from the commandos he insisted were lurking just outside the fences. He kept his weary flock up until the wee hours, demanding vote after vote on the option of "revolutionary suicide," that is, a community-wide resolution to kill themselves rather than fall into the hands of their (nonexistent) beseigers. On more than one occasion, he ordered them to drink a Kool-Aid-like punch that he pretended was poisoned, as a "test" of their loyalty.

The physical and psychological stresses Jones inflicted on his followers -- many of which fall within agreed-upon definitions of torture -- explain in part why they were so vulnerable to his apocalyptic hysteria. They also lived in apocalyptic times, under the shadow of the political assassinations of the 1960s and haunted by an ever-present intimation that some form of revolution might happen at any moment. Also, church members believed that "fascist America" was spying on them and plotting their deaths because federal officials really were doing just that to such groups as the Black Panthers, who considered the Peoples Temple their allies.

The triggering event for the tragedy was an investigatory expedition to the compound led by Rep. Leo Ryan in response to relatives outside the church who complained that their family members were being held captive. Although Jones customarily kept dissidents and potential defectors drugged and confined during such official visits, several residents still managed to ask Ryan to take them with him when he left. As the group boarded two small aircraft outside the settlement, some church members followed and opened fire on them, killing Ryan, three journalists and one of the defectors. At that point, Jones realized that this would be his last chance to fulfill his long-cherished, megalomaniacal fantasy of making his followers die for him.

Scheeres calls the horrors of Nov. 18, 1978, a "massacre" rather than a mass suicide, pointing out that many of the victims -- exhausted and disoriented as they were when Jones ordered them once more to drink poisoned punch -- resisted, especially when they realized that this time the poison was real. Some were compelled to drink at gunpoint while others were forcible injected. Twenty-four of the victims were infants who were fed the drink by adults and 150 were under the age of 10. However, the willingness of enough church members to carry out Jones' orders -- murdering their own families, friends and finally themselves -- indicates that his control over much of his flock remained absolute.

They would become the largest number of American civilians to die in a single, non-natural disaster until 9/11, yet Jonestown is less well-known than, say, the Manson Family murders to many people born since 1980. It doesn't fit into a familiar narrative or offer a politically convenient villain. Jonestown illustrates the corruptibility of both religious piety and leftist utopianism, but the left does seem to struggle with it more than conservatives. For anyone who places too much faith in the espousal of right-on ideology (and that would include a lot of academics), Jim Jones is particularly troubling: How can someone who said all the right things go so wrong?

For all the thoughtfulness of "A Thousand Lives," Scheeres herself runs aground trying to defend Jones' followers from being written off as suicidal sheep. "If anything, the people who moved to Jonestown were idealists," she writes. "They wanted to create a better, more equitable society." But it is precisely the idealists who are most likely to get sucked into a nightmare like Jonestown, because when your goal is so very beautiful, it is so very tempting to cut moral corners.

It all began back when Jim Jones told himself that for the sake of social justice, it would be OK to fake a few "miracles." Each new act of deception or bullying simply amplified that leeway a little more, infecting the whole community. For Jones, the power to do good mutated into power for its own sake. Jonestown is the darkest reminder of how, when the ends are allowed to justify the means, the means become an end in themselves.

American History Books Our Picks Religion Suicide What To Read