Behind the GOP's OWS backlash

By comparing the protests to '60s demonstrations, Republicans reveal their continued opposition to civil rights 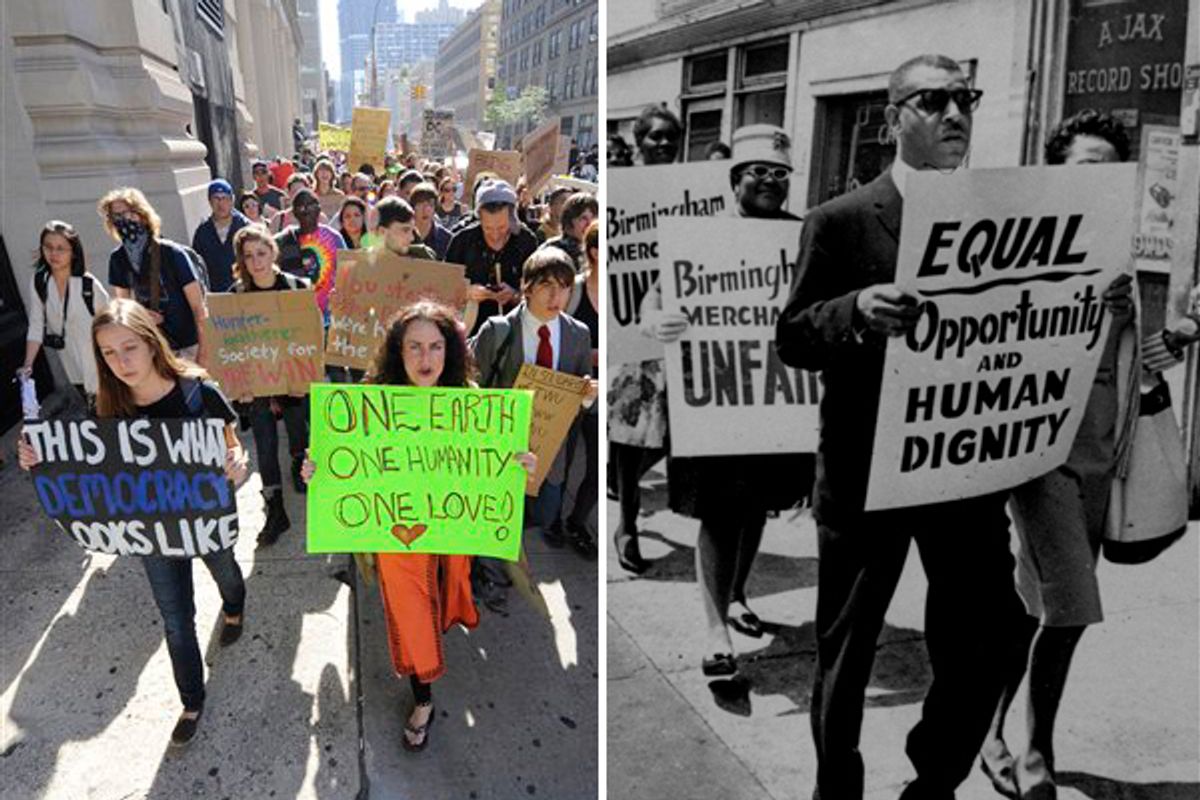 In reaction to the growing Occupy Wall Street protests, the Republican Party has dusted off some of the oldest cliches in our political discourse. There's Rep. Paul Broun, R-Ga., making the contradictory claim that Americans exercising their First Amendment right to protest represent an "attack on freedom." We have House Majority Leader Eric Cantor, R-Va., slandering peaceful demonstrators as a "mob ... pitting Americans against Americans" only a few years after he praised Tea Party protests for "fighting on the fighting lines of what we know is a battle for our democracy." And there's GOP presidential front-runner Mitt Romney, who once bragged about his father protesting with Martin Luther King, now calling the protests "dangerous ... class warfare."

The uniting idea behind these screeds is this: a group of socialists, radicals, anarchists and other assorted Dirty Hippies is co-opting demagogic demonstrations against universally recognized Bad Guys as part of a stealth attack on Mom and Apple Pie.

If the narrative sounds familiar, that's because it is part of the ongoing Republican war against the 1960s -- one first openly declared by Richard Nixon with his fear-mongering diatribes about the alleged battle between the Good "Silent Majority" and the Bad people participating in mass protest movements. In a revealing interview on Friday with fringe-right-wing radio host Laura Ingraham, Rep. Peter King, R-N.Y., cogently tied together all the disparate GOP jeremiads against the Occupy Wall Street protests by saying, "I'm old enough to remember what happened in the 1960s when the left-wing took to the streets and somehow the media glorified them and it ended up shaping policy." He added that, "We can’t allow that to happen."

By using such language, King and his fellow Republicans are betting that most Americans will view such claims through the same revisionist lens that has so effectively distorted our collective impression of the 1960s. As I note in the first chapter of my recent book "Back to Our Future," the 1960s, a time of unprecedented social and economic process, has been successfully recast since the Reagan era as an era of tie-dye, not thin ties; burning cities, not men on the moon; LBJ scowls, not JFK glamour; redistributionist War on Poverty "welfare," not universalist Medicare benefits.

The typical GOP attacks on the era have been framed as cultural criticism à la Marilyn Quayle's 1992 Republican National Convention speech, during which the Second Lady of the United States bellowed that "not everyone joined in the Sexual Revolution or dodged the draft … Not everyone concluded that American society was so bad that it had to be radically remade by social revolution ... not everyone joined the counterculture."

By explicitly attacking how the 1960s "shaped policy" rather than merely criticizing how the decade changed mores and aesthetics, King has gone much farther than such empty banalities. Indeed, his statements on Friday expose a taboo truth beneath the GOP agitprop: the modern Republican Party doesn't just object to 1960s-style imagery, tactics and political performance art, it objects to the concrete legislative results of 1960s mass protest -- results like the Civil Rights Act, the Voting Rights Act, statutes protecting women's rights, the creation of the Environmental Protection Agency and the end of the Vietnam War.

Such results are correctly seen by the vast majority of rank-and-file voters as national accomplishments to celebrate, and when those accomplishments are discussed in the context of politics, they are depicted as achievements that only the most extremist members of the fringe -- bigots, chauvinists, polluters, warmongers -- could even dream of demonizing in a public forum.

But that's why King's comments are so important -- they remind us that it's not just the fringe of the fringe that still fundamentally opposes equal rights for minorities and women, voter enfranchisement, protecting the environment and ending adventurist wars, it's the leaders of today's Republican Party.

King's words only provide the latest evidence of this disturbing truth. Recall how in 2002 then-Senate Republican Leader Trent Lott said he was "proud" of his state's opposition to the civil rights movement, adding that "if the rest of the country had followed" the lead of Dixiecrats who opposed civil rights, "we wouldn't have had all these problems over the years." Before that, we had Ronald Reagan -- the man who, in his first campaign for California governor, pledged to crush the "small minority of beatniks, radicals and filthy speech advocates" trying to end the Vietnam War and Jim Crow laws and who later, as president, described antiwar protesters as '60s-inspired traitors "who would place the United States in a position of military and moral inferiority."

Thanks to this decades-long smear campaign, attacking the legislative accomplishments of the 1960s has become a clarion call for the Tea Party and its media organs. They frame it as a "back to the 1950s" movement, using the alluring language of nostalgia to suggest, like King and Lott, that the 1960s brought about horrific changes, and that if we could just return to a time before civil rights, women's rights, environmental policy and antiwar accomplishments, America would be a better place. As I document in my book:

Tea Party protesters and their leaders in the conservative movement acknowledge this intrinsically in their choice of language and extrinsically in their most unfiltered declarations. For example, an essay promoted on the website of FreedomWorks, the organization that sponsors Tea Party demonstrations, says protesters are enraged by "the sense that the country that they grew up in is slipping away right before their eyes."

House Republican leader John Boehner (R-OH) says today’s Tea Party rallies are organized by people who are saying "wait a minute, this is not where we're going, my kids and grandkids are going to grow up in a different country than I grew up in." It’s a line that went from his lips to the rank-and-file’s mouth, as local media filled up with quotes like the one delivered by a California protester who told her newspaper "We’re here to keep America the way it was when we grew up."

Glenn Beck, the Tea Party’s media field general, says it is about "real outrage from real people who just want their country back" -- and he’s very clear that "back" means before The Sixties. In one recent diatribe, Beck praised Joe McCarthy for "shin[ing] the spotlight on the Communist Party" in the 1950s. In another, he insisted "50 years ago, people felt happier" than they do today because today "we have less God," prompting his guest to agree by saying, "Something happened in the 1950s where everything went down...that's when they started taking God" -- "they" being the 1960s hippies...

"Things we had in the ‘50s were better," another tea party leader told The New York Times.

"What we want is to get back to where our country was 100 years ago," said an Oklahoma tea party leader on CNN...

The language -- "back," "real people," "deviating from," "slipping away," "the way it was," "different country than I grew up in," "legacy," "better time" -- underscores the fierce yearning for a fantastical authenticity and conformity of old-time America before the 1960s, as if the real-world downsides of pre-1960s America like lynch mobs, religious bigotry, burning crosses, chauvinism, union-busting and smokestack pollution was just great.

Appalling as this sounds, it's not surprising coming from a party that has called the first African-American president a "tar baby"; champions Jim Crow-esque laws against Latino immigrants and Muslims; votes against legislation to halt discrimination against women; works to disenfranchise thousands of minority voters and repeal key parts of the Voting Rights Act; runs presidential candidates promising to wholly eliminate the Environmental Protection Agency; and has been the big supporter of most of our Vietnam-like military adventures of the past decade.

With the rise of the Tea Party, many pundits claimed that this isn't your grandfather's conservative movement anymore, that the right had fundamentally changed. But considering how today's conservative extremism almost perfectly fits into the party's age-old war against the 1960s, and seeing how right-wing politicians like King are now happy to contextualize their positions within that war, we see that it actually is your grandfather's conservative movement -- and that's the problem.