The army blames sectarian clashes. Everyone else blames the military 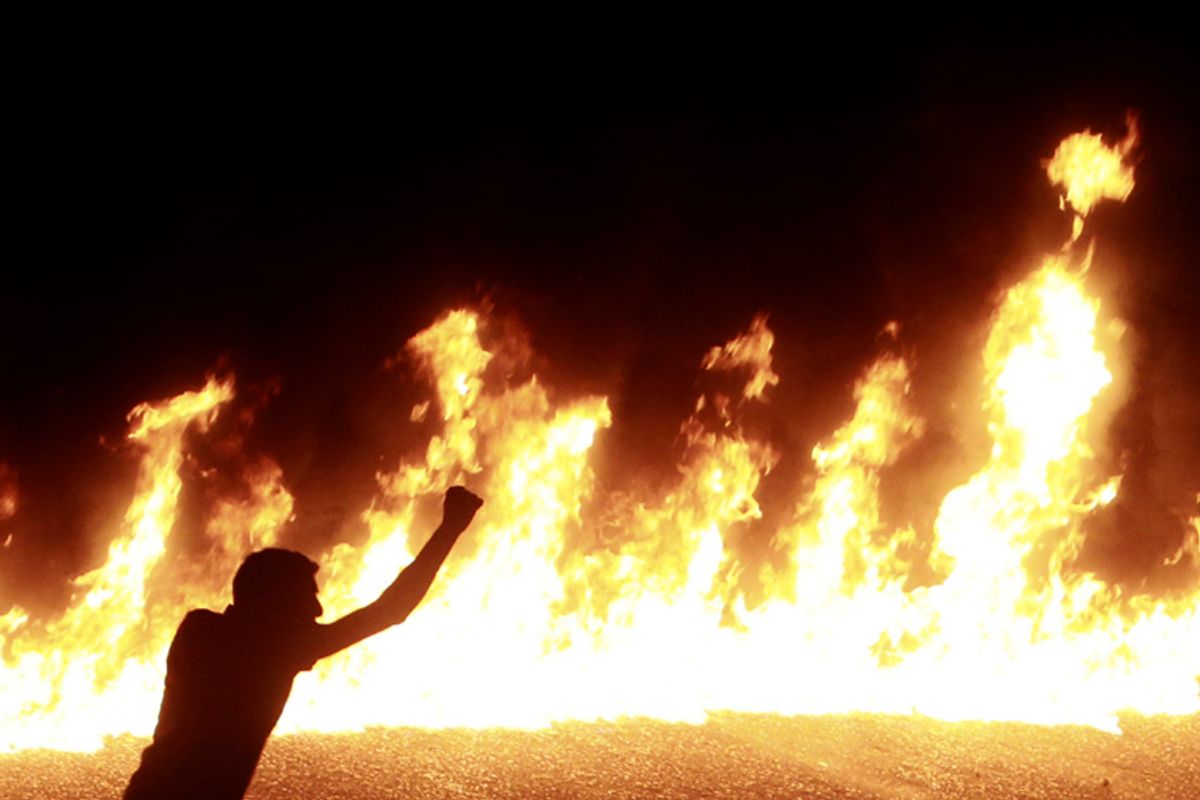 A protester stands near a line of fire during a demonstration in Cairo October 9, 2011. (Amr Dalsh / Reuters)
--

CAIRO, Egypt -- At least 24 people were killed during clashes between Egyptian security forces and several hundred protesters, mostly Coptic Christians, in central Cairo on Sunday, in one of the bloodiest street battles since the ouster of former president Hosni Mubarak earlier this year.

The intensity and scope of the violence in downtown Cairo -- which left more than 150 injured and included at least one army vehicle plowing into a crowd of protesters -- underscored the fragility of Egypt's security in the run-up to parliamentary elections next month.

Military-led transitional officials re-enforced their late-night appeals for calm with a mandatory curfew in most of downtown Cairo early on Monday.

Official state media and the government immediately blamed the country's minority Coptic Christians and the influence of unnamed "outside forces" for the clashes -- a move that may only heighten the what is typically relatively infrequent sectarian tension in the Arab world's largest country.

Copts, as well as some Muslims who had joined in the fight, pointed fingers at a powerful military apparatus using Mubarak-style strongman tactics to quash the protests. But as is so often the case in the tumultuous post-uprising Egypt, it was not entirely clear how or why the turbulence on the streets escalated from bad to deadly.

The only certainty when the tear gas settled on Monday morning was that the parties involved -- Egypt's Muslims, Christians and the increasingly vilified military-led regime -- had a drastically different view depending on their sources of news.

The violence erupted before dusk on Sunday evening after what appeared to be a typical afternoon of nonviolent demonstrations in Egypt's capital.

Coptic Christian protesters, still seething over the torching of a church by Muslims in a village in Upper Egypt late last month, took to the streets to demand the ouster of local officials and a tougher government response to such attacks.

Several hundred Copts gathered in the northern Cairo district of Shubra, a densely packed neighborhood predominately made up of Christians, who constitute roughly 10 percent of Egypt's nearly 80 million residents.

From Shubra, the protesters marched south in the direction of Egypt's heavily-fortified state television broadcasting headquarters along the Nile River near downtown.

Just before sunset, the march came under fire by "unknown assailants" tossing rocks and shooting pellets, according to eyewitnesses and news reports. Already enraged by the alleged failure of Egypt's government to guarantee Christians' security, the protesters began criticizing the country's military rulers.

Their main chant, "Down with the Field Marshall," referring to Mohamed Tantawi, has become a recurring swipe at the country's top military leader among both Muslim and Christian pro-democracy activists in recent months.

Just as quickly as the Copts reached their destination, a massive rock fight erupted between protesters and hundreds of "thugs" across from the television building. It was not immediately clear whether the thugs -- an increasingly common catch-all for anyone instigating violence -- were average citizens or plainclothes security officials.

Several eyewitnesses reported that the thugs initiated the attack against Christian protesters.

Egypt's government, on the other hand, blamed the Copts for the violence.

Minor clashes eventually mushroomed into rioting, as military cars and other security vehicles were hit by rocks and torched in a rare display of anger reminiscent of the January uprising that toppled Mubarak.

Gun shots could be heard in several downtown neighborhoods from the TV building to Tahrir Square, and tear gas canisters were fired to disperse the swelling crowds of Christians and some Muslims who had joined the anti-government demonstration, both chanting, "Christians and Muslims, hand in hand."

Eventually, the military quelled the riot, for the most part with brute force.

Independently-owned satellite news channels aired pictures of armored Egyptian military vehicles barreling into a throng of protesters outside the television building. At least one army vehicle struck several people on the street at full speed.

Government media ignored such graphic shots and instead portrayed a clear battle between Egypt's Christians and majority Muslims, implying that sectarian divisions had fueled the protests.

On the streets, however, the anger from protesters -- among both Christians and Muslims -- seemed to be aimed at the ruling military leadership, which has been increasingly criticized for being slow to implement post-Mubarak democratic reforms.

One government television network reported Sunday that the majority of the casualties occurred on the military's side -- even as Egypt's health ministry reported otherwise. State-employed anchors and commentators decried the "violence and thuggery" of Coptic Christians for attacking the security forces throughout the day.

Egyptian officials also interrupted the broadcast of several independent television stations airing footage of the protests. Military police stormed into the on-air studios of the American-funded Al-Hurra channel and Egyptian-owned January 25-TV, according to the state-funded Ahram Online website.

At least one government-funded newspaper wrote that protesting Copts had stolen weapons from security to use in the attacks, according to the Associated Press. Independent observers reported that, aside from a few rocks, the majority of protesters were unarmed.

Prime Minister Essam Sharaf made a rare televised address to the nation early on Monday in an attempt to calm Egyptians, asserting that the violence was not the result of sectarian strife.

Instead, he said, it was sparked by foreign agents working to sow chaos and further divide a post-uprising Egypt.

"The nation is in danger and it is obvious that there are plans by others to destabilize the country. Sectarian strife is asleep, and we don't want to wake it up," said the prime minister on state television Monday.

A few sporadic incidences of violence have broken out between Copts and Egypt's majority Sunni Muslims -- mostly over issues of conversion, marriage and the bureaucratic restrictions involved in the construction of new churches.

In the months following Mubarak's ouster, sectarian tensions rose after several Christian churches were burned by Muslims. The government's efforts to keep sectarian tension at bay on Monday morning, however, did not seem to be immediately effective.

Several Christian-owned shops including a liquor store were attacked by "thugs" early on Monday, according to the independently-owned Al-Masry Al-Youm newspaper.