The Great 8: Billionaires who will pay more

We canvassed the 400 wealthiest people in America. How many said they would pay more taxes? That's right: 2 percent 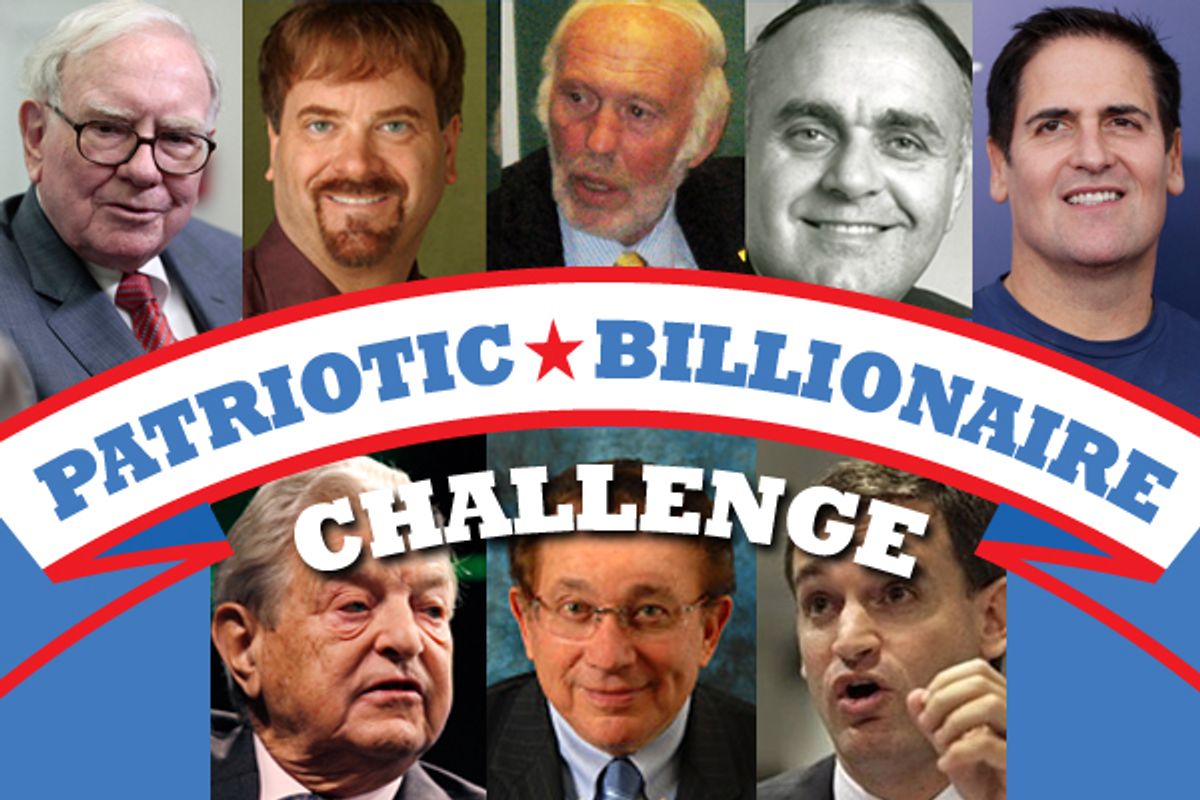 When Warren Buffett called on the U.S. government in August to "stop coddling the super-rich," he pointed out that he pays less of of his income in taxes than his secretary does. He said the rich should pay higher taxes for the sake of "shared sacrifice," and suggested that most of his wealthy friends "wouldn't mind being told to pay more."

To test that notion, Salon launched the  Patriotic Billionaire Challenge. We put the question to every member of the "Forbes 400" list, all of them with a net worth of at least $1 billion: "Are you, like Warren Buffett, willing to pay higher taxes?"

The results are in. Of 400 billionaires, only eight (including Buffett) say they are willing to pay more.  Three others indicated opposition; one said maybe.

But most declined to comment at all. Oprah Winfrey, who endorsed Obama in 2008, did not respond. Nor did liberal media mogul Ted Turner. Prominent Democratic Party donors from Hollywood such as Steven Spielberg, David Geffen and Barry Diller did not express a view. Philanthropists Bill Gates and Michael Bloomberg -- whom we queried repeatedly -- refused to comment on Buffett's argument, even as it became a central part of Washington's political conversation.

On Sept. 19, President Obama rolled out his jobs plan, calling for individuals making more than $250,000 to pay higher taxes for the sake of paying down the deficit and funding the president's jobs plan. As the president has pitched the plan to the country, he has repeatedly invoked the name of the Omaha Oracle as a selling point -- dubbing his proposal as "The Buffett Rule." Senate Democrats proposed an alternative solution: A 5 percent surtax on any income a person earns beyond $1 million a year -- including capital gains. The president threw his support behind the measure.

Most of those who did respond to Salon's question seemed to have strong opinions. Liberal philanthropist, George Soros (Net worth: $22B), expressed approval.

Warren Buffett is living up to his reputation as an astute investor. The rich hurt their own long term interests by their opposition to paying more taxes.

James Simsons, chairman of Renaissance Technologies ($10.6B), and Herbert Simon, co-founder of the Simon Property Group ($1.6B), both responded with a simple "Yes."

John Arnold,  manager of the Centaurus Advisors hedge fund ($3.5B), had one condition: "I support incrementally raising tax rates on the wealthiest if part of a comprehensive package to address the federal deficit. "

Leon Cooperman, manager of the Omega Advisors hedge fund  ($1.8B), offered his own plan, saying he supports "a 10-percent income tax surcharge for three years on those earning more than $500,000 per year." He said that he believes in the progressive income tax and and that he's "very fond of Warren." But  also expressed wariness about President Obama's plan, saying he "wants to give away money to the public."

Others supported Buffet's sentiment with some qualifications. Todd Wagner, co-owner and CEO of 2929 Entertainment ($1.2B), said, "I'm a lucky guy. I have no issue paying more." But he added that the revenue raised would only amount to "maybe 8 to 12 percent of what's needed, based on what everyone thinks we need to get the debt under control."

Where's the rest come from? Military cuts? Raising the age on social security or medicare? I don't have that answer. But I know that that's the difficult part of it.

The problem is nobody trusts how the government spends it. We all feel a little concerned that it's just dropping into a black hole. The wealthiest absolutely should pay more, but I also want to feel that it's going to something that matters.

Wagner's business partner, Mark Cuban, owner of the Dallas Mavericks basketball team and chairman of HDNet ($2.3B), said, "I have absolutely no problem paying more taxes. None." But he went on:

What I have a problem with is how the money is spent.  If the incremental money could be directed to defined and deserved recipients.  I would be thrilled to write the check.

The problem I have is not on the revenue side, its on the expenditure side. Too much money is wasted on bureaucracy, adminis-trivia,  pensions and over-expansive federal employment.

So I’m a resounding yes on more taxes, but an attachment to the funding to be directly spent on approved programs. If a program doesn’t deliver 95 percent  or better to its intended recipients, it should be put on hold until it does.

Stanley Hubbard, founder, Hubbard Broadcasting ($1.9B), said maybe: "There is more to it than a simple yes or no.  It depends upon a lot of things."

John Catsimatidis, CEO of the Gristedes supermarket chain ($2B), offered a different version of "shared sacrifice."

All Americans should feel the pain equally; not be prejudiced only against a certain group. If that is allowed, it opens doors to other prejudices to other groups.

Bernie Marcus, co-founder of Home Depot (Net worth: $1.8B), didn't say "no," but expressed worry that Buffett and Obama are "penalizing success."

I have no problem paying my fair share of taxes. What I do have a problem with is the idea that by raising taxes on a select few, we can get our economy growing again and close our national debt. That is false. Getting people back to work with good-paying, sustainable jobs is the only thing that will get our nation out of this recession because it will bring in more tax dollars. That’s what our government should be focused on rather than penalizing success.

He later clarified his position, saying:

I’m not against anybody paying additional taxes as long as there is a comprehensive tax program which involves spending cuts. We have to cut spending, which is the biggest evil we have in this government.

And Charles Koch, the CEO of Koch Industries and funder of conservative causes ($25B), categorically rejected the idea.

Much of what the government spends money on does more harm than good; this is particularly true over the past several years with the massive uncontrolled increase in government spending. I believe my business and non-profit investments are much more beneficial to societal well-being than sending more money to Washington.

What about all the others who ducked the question entirely? Peruse the Forbes list, and if you run into any of them, be sure to ask them yourself. We'll be curious to learn what they say.