Are our drone attacks legal? 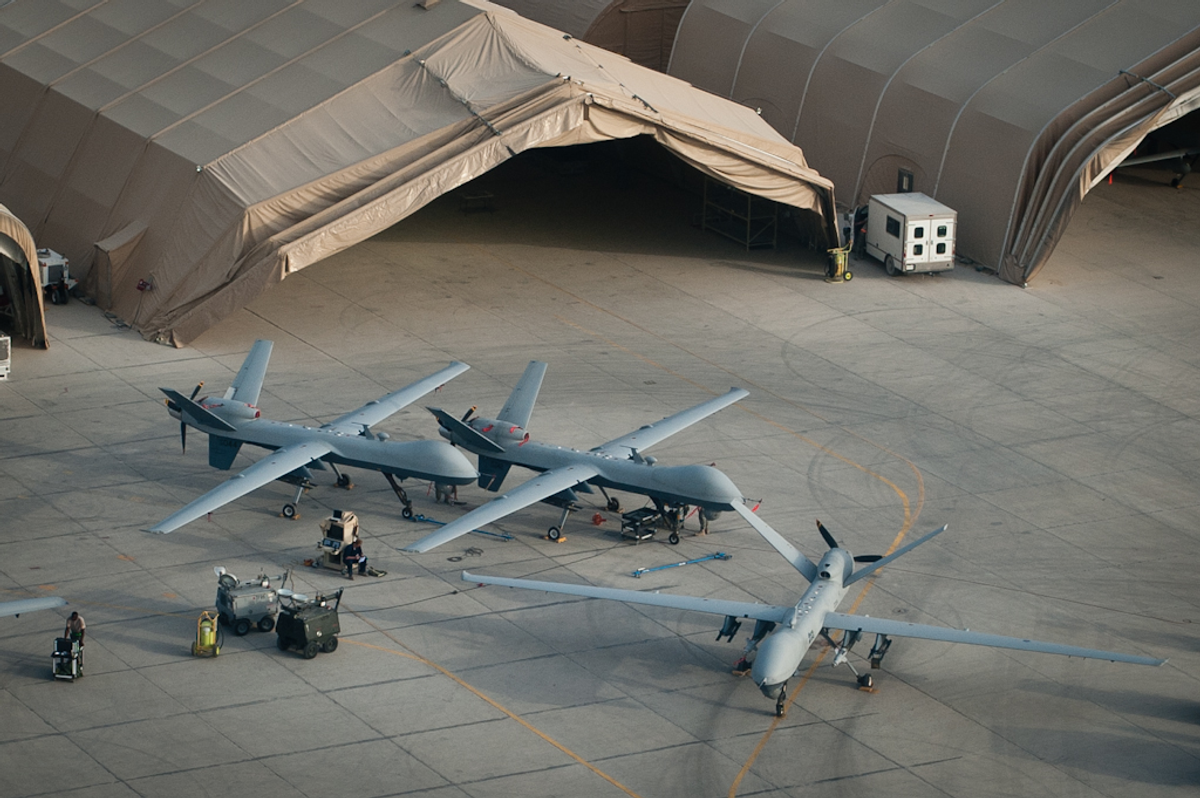 Few weapons in the modern arsenal excite the popular imagination like drones.

Sleek and deadly, operated at a remove of thousands of miles by faceless technicians, drones are the harbingers of a new type of warfare: technologically sophisticated, surgically precise and able to take out the enemy with little or no risk to American troops.

But there is also a darker side to the drone image. The glossy new war toys are often portrayed as killer robots that, in a Doomsday scenario straight out of Space Odyssey 2001, may one day go rogue.

In reality, as numerous experts have pointed out, a drone is just a modern-day tool of war. It can be used as a weapons-delivery system, it can provide sustained and minutely targeted surveillance, and it can take out bad guys with astonishing accuracy.

But the convenience of the drones has prompted an explosion in their use. Drones are no longer deployed solely in countries like Afghanistan and Iraq, where the United States military is party to a declared armed conflict. Drones are now being used in Yemen, Somalia, Libya, and, perhaps most controversially, in Pakistan, a nominal U.S. ally in the war on terror.

Legal scholars, diplomats, military experts and activists have all weighed in on the issue, but to date there is little consensus on whether drones are acceptable under international law.

Both sides of the question have ardent champions. Christine Fair, assistant professor at Georgetown University's Security Studies Program, calls drones "the most successful tool that the United States and Pakistan have to eliminate dangerous militants that threaten the security of both states," and she derides those who seek to limit their use.

At the opposite end of the spectrum is Mary Ellen O'Connell, a professor at Notre Dame Law School, who told a Congressional hearing in April 2010, that drones were not lawful for use outside of combat zones.

"Restricting drones to the battlefield is the most important single rule governing their use," she said. "Yet, the United States is failing to follow it more often than not. At the very time we are trying to win hearts and minds to respect the rule of law, we are ourselves failing to respect a very basic rule: remote weapons systems belong on the battlefield."

But in the war on terror, the globe becomes the battlefield, argue drone enthusiasts.

Not so, say the critics -- the United States does not have an unlimited license to kill whomever it wants, wherever it wants.

The question of whose hand is on the joystick is a touchy subject when it comes to determining legality: drones used by the military as an extension of armed conflict are likely to be accepted, while the same system deployed by the CIA to target a specific individual or group raises hackles among many in the sphere of international law.

"There is an important legal distinction here," said Daniel Rothenberg, executive director of the Center for Law and Global Affairs at Arizona State University. "When the military is operating in a formal theater of conflict, they are guided by the Law of Armed Conflict, with all of it rules and restrictions. They can tell you what laws they follow, even if they sometimes break them. With the CIA, we just do not know -- do they engage in legal analysis? What is the process by which they review targeting decisions? What body of law do they see as pertaining to them?"

The CIA has had a "covert" drone program in Pakistan since the administration of George W. Bush, although it is perhaps the worst-kept secret in the agency's history.

Under President Barack Obama, drone strikes in Pakistan have increased dramatically. According to a London-based organization, The Bureau of Investigative Journalism (TBIJ), there is a drone strike in Pakistan every four days.

The U.S. government portrays the strikes as unalloyed successes, claiming that out of the more than 2,000 people thought to be killed so far, all but 50 were militants.

These figures are hotly disputed, however. According to TBIJ, at least 385 civilians, more than 160 of them children, are among the dead, who total between 2,292 and 2,863, depending on which sources are cited.

The issue of civilian casualties feeds directly into the question of legality. According to the Law of Armed Conflict, two important principles must be observed when making a targeting decision: distinction and proportionality.

"Distinction" requires that attacks be limited to military objectives; "proportionality" prohibits attacks that may be expected to cause incidental loss of civilian life that would be excessive in relation to the concrete and direct military advantage anticipated.

According to State Department Legal Advisor Harold Koh, a renowned expert in international law, the U.S. drone program is completely legal, under what he refers to as "the Law of 9/11."

"Let there be no doubt: the Obama Administration is firmly committed to complying with all applicable law, including the laws of war, in all aspects of these ongoing armed conflicts," said Koh, speaking at the American Society of International Law, on March 25, 2010.

He then delivered what remains the sole justification the administration has given to date for its drone programs across the globe:

"It is the considered view of this Administration ... that U.S. targeting practices, including lethal operations conducted with the use of unmanned aerial vehicles, comply with all applicable law, including the laws of war ... the United States is in an armed conflict with al-Qaida as well as the Taliban and associated forces, in response to the horrific 9/11 attacks, and may use force consistent with its inherent right to self-defense under international law. As a matter of domestic law, Congress authorized the use of all necessary and appropriate force through the 2001 Authorization for Use of Military Force (AUMF). These domestic and international legal authorities continue to this day."

He lauds the U.S. targeting practices as "extremely robust" and applauds the technology of drones for allowing ever-greater precision.

Many legal scholars dismissed Koh's remarks as empty assurances rather than reasoned legal argument, but Rothenberg cautions that the question is complicated, and requires a nuanced response.

"Harold Koh is a giant of international law," he said. "We cannot just write off his remarks. This is a complex struggle for a legalistic mechanism to justify the drones ... the world does not quite know whether it is legal or not. There is no world government, no world court to rule on this issue, no global police force to enforce a decision."

In the absence of an overarching power, the United States has been able to write its own playbook. This is what Secretary of State Hillary Clinton calls "smart power," defined as "a blend of principle and pragmatism" that makes "intelligent use of all means at our disposal."

But not everyone has signed on to the U.S. worldview.

Philip Alston, the U.N. Special Rapporteur on extrajudicial, summary or arbitrary executions, raised the alarm about drones in a report delivered to the General Assembly in May 2010.

"The greater concern with drones is that because they make it easier to kill without risk to a State's forces, policymakers and commanders will be tempted to interpret the legal limitations on who can be killed, and under what circumstances, too expansively," he said, decrying what he termed a "Playstation mentality to killing."

While conceding that the use of drones could be justified in theaters of war, provided the nation deploying the weapons conformed to the laws of armed conflict, he stated flatly that drones could not legally be used outside of that mandate.

"Outside the context of armed conflict, the use of drones for targeted killing is almost never likely to be legal," he said.

"Targeted killing" is the euphemism for a strike aimed at a specific individual; "assassination" is prohibited, and therefore frowned upon. Many of the individuals targeted -- Pakistani militant Baitullah Mehsud, for instance, or Al Qaeda leader Ilyas Kashmiri -- were killed in Pakistan, a country with which the United States is not at war.

This, then, is the crux of the problem: while, as Koh insists, the United States is in a state of armed conflict with Al Qaeda and the Taliban, it is not at war with Pakistan, Yemen, Somalia, or other areas where drones are now being deployed.

Pakistan has at times given tacit consent to the use of drones on its territory. But as popular anger grows over the strikes, the government has grown more reluctant to be seen as supporting the U.S. program, and in April the Pakistani government demanded that the drone strikes be stopped.

The issue of civilian casualties has added fuel to the fire. According to principles of distinction and proportionality, outlined above, drones cannot legally be used if there is a good chance that civilians will suffer unduly.

"With drones, the intention is not Dresden -- they are not aimed at punishing civilians," said Anatol Lieven, professor in the War Studies Department of King's College London. "They are directed at Al Qaeda and the Taliban. But the majority of militants are living in their own homes or are guests in other people's houses; any strikes will kill others."

This already calls the use of drones into question on the grounds of proportionality, say experts. But even more delicate is the question of "distinction" -- how does the U.S. identify combatants in a part of the world where its understanding is limited and intelligence is so often faulty?

Time and again, drones have targeted the wrong house, the wrong group, or have caused excessive collateral damage.

On March 17, a drone strike in Datta Khel, Pakistan, killed up to 44 men. While there were Taliban present, the majority of those killed were tribal elders, not militants, according to Pakistani officials.

The timing was also unfortunate, coming as it did just two days after Raymond Davis, a CIA contractor who had been arrested for the killing of two Pakistanis, was released.

"This was seen as highly provocative by the Pakistanis," Lieven said. "They were convinced that the United States was sending a message: ‘don't you dare try and put pressure on us.' It conveys a sense of a military on autopilot, without the slightest idea of the political realities."

In a region where the United States has a limited window on the intricate mechanisms that shape society, intelligence can often be faulty -- the product of malfeasance on the part of informers or simple misunderstanding.

Gareth Porter, an investigative journalist with InterPress Service, released a report in June showing that, of 1,355 suspected Taliban detained in Afghanistan during a 90-day period in 2010, more than 80 percent were later shown to be innocent civilians. He openly questioned whether the data on those killed in night raids and drone strikes was just as flawed.

"The deceptive nature of those statistics, as now revealed by U.S. military data, raises anew the question of whether the statistics released by [Commander of U.S. and NATO Forces General David] Petraeus on killing of alleged Taliban were similarly skewed," he wrote.

Perhaps more useful than looking at the question of legality, says Lieven, is taking a more pragmatic approach.

"I have looked at drones from the point of view of morality," he said, "and also of practicality. There is a balance between gains and losses. There have been gains, and they are real, although the reality suggests that the effects are questionable. But the losses are also great -- we are alienating the population as a whole."