The billionaire mayor will "allow" peaceful protesters to remain. What right did he have to remove them? 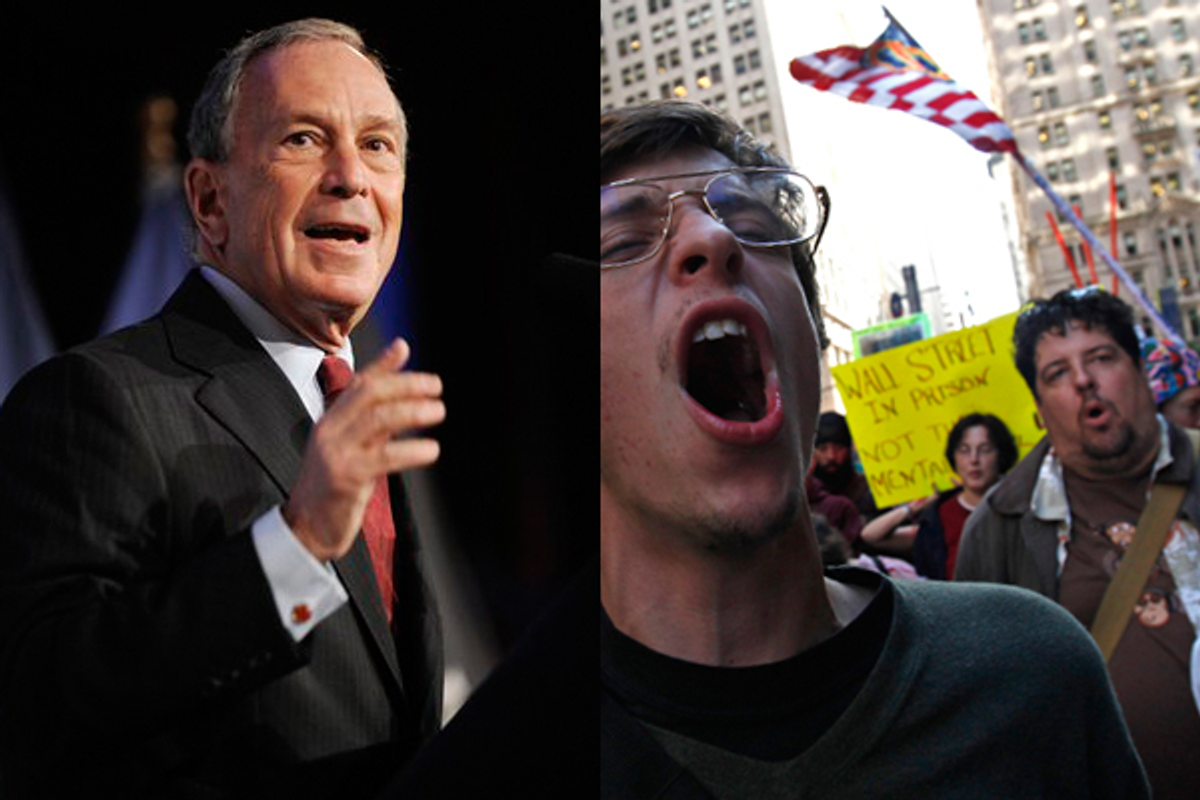 Despite fawning media coverage of a mayor from whom many elite reporters hope to get a $500,000-a-year job, there remains a simple reason why polls show that a large number of rank-and-file New Yorkers haven't fallen for the propaganda: It's because he behaves like he believes he's a king.

This is a billionaire despot who weekends in Bermuda and doesn't come home for municipal emergencies; deliberately lands himself recession-blind headlines describing him as "baronial"; makes sure public workers plow his street while the Big Apple's citizens die; and now, most recently, declares that he has the extra-constitutional power to decide who is "allowed" in New York City and who is not. As the New York Times reports (emphasis added):

Mayor Michael R. Bloomberg, seemingly softening his language about the Occupy Wall Street protest, suggested on Monday that he did not anticipate an effort by the city to remove the demonstrators from a park in Lower Manhattan.

“The bottom line is, people want to express themselves, and as long as they obey the laws, we’ll allow them to,” the mayor told reporters at the start of the city’s 67th annual Columbus Day parade.

The Times is too busy playing stenographer to King Mike's royal court to catch the significance of Bloomberg's statements -- namely the fact that Bloomberg is now claiming unprecedented powers for a contemporary politician. Such Bloomberg-worshiping reportage is not surprising coming from the same newspaper that has stubbornly insisted on billing Bloomberg as the "Freedom Mayor" despite his penchant for mass arrests, extensive police spying operations and infamous stop-and-frisk policies.

Nonetheless, while the Times misses the news within its own piece, there's no doubt that Bloomberg's linguistic framing is the big news here. He is stating that he -- not a court -- has the power not only to unilaterally declare who is "obey[ing] the laws" but more broadly, the additional power to decide who is ultimately "allowed" to express themselves, and who is not.

The First Amendment of the United States Constitution sees it a bit differently. It doesn't say that while Congress does not have the power to "abridge the freedom of speech ... or the right of the people to peaceably assemble" -- King Mike does. On the contrary, it protects the right of Americans to express themselves -- whether Bloomberg likes what's being expressed or not.

Thankfully, the Times does go on to quote New York's Gov. Andrew Cuomo giving Bloomberg a much-needed civics lesson. Cuomo rightly notes that the Occupy Wall Street demonstrators "have a right to protest; they have a right to their opinion. That’s what makes a democracy work, and the frustration is felt all across this country.”

It sounded like the higher-ranking governor was putting the mayor in his place -- reminding Bloomberg that while the billionaire may spend a lot of time vacationing in third-world banana republics, at home, he's still a mere local official confined by that annoying thing called the U.S. Constitution.

Whether Bloomberg listens to the lecture or not is another question -- kings, after all, don't tend to respect the rule of law.