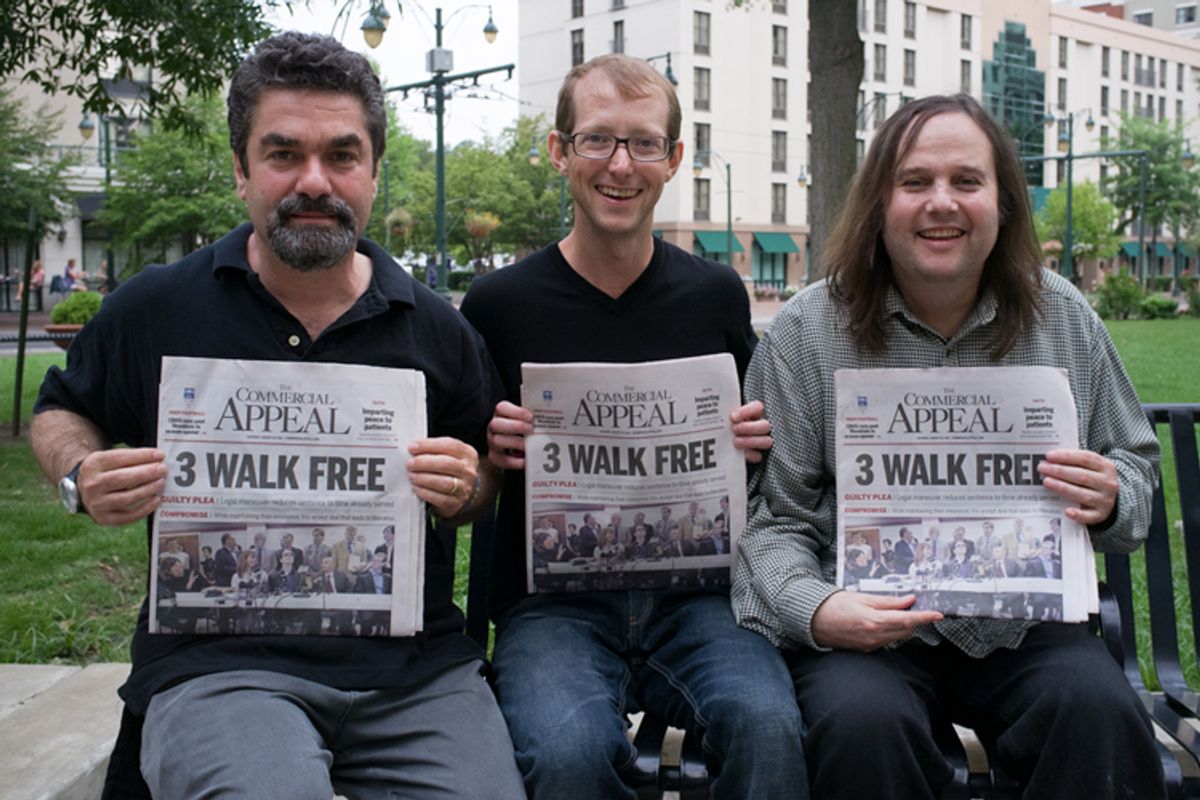 The most innocent guilty men in America reunited yesterday in New York City.

Damien Echols, Jason Baldwin and Jessie Miskelly Jr., known as the West Memphis Three, spent 18 years in prison for the 1993 murder of elementary schoolers Christopher Byers, Michael Moore and Stevie Branch. Their stories were told in Joe Berlinger and Bruce Sinofsky's epic trilogy of "Paradise Lost" documentaries. The trio reunited publicly at a morning screening at HBO headquarters, then later at the New York Film Festival premiere of the third installment in the series. They were released from prison in August following an unusual plea-bargain arrangement that let them assert their innocence while allowing the state to continue to proclaim their guilt. (More about that in a moment.)

At the HBO event, Echols was dressed in black from head to toe, a wardrobe that got him stereotyped by neighbors and police in 1993 as a heavy-metal Satanist villain. Echols said he'd just visited Disneyland for the first time, and that he often stumbled because he wasn't used to walking without leg irons. Miskelly, who according to court documents has an IQ of 73 and the emotional development of a 6- or 7-year old, left halfway through the press conference and reportedly did not join Echols and Baldwin onstage at the New York Film Festival screening last night. Instead, he watched and waved from a balcony seat. The top of Miskelly's bald head is tattooed with a clock face; the clock has no hands, he explains in the new film, because time stands still when you're in prison.

"When I got locked up, there was no such thing as the Internet," Echols told reporters at the HBO press conference. "I haven't eaten with a fork in 20 years."

Baldwin, who was just 17 when he went to prison, grinned as he showed reporters his learner's permit. "I haven't actually driven yet," he said.

The phrase "innocent guilty men" may seem a glib way of describing Echols, Baldwin and Miskelly, but considering the bizarre circumstances behind their release, I'm not sure how else to put it. The men were freed in August, after Arkansas authorities apparently realized that nearly two decades' worth of activist-sponsored research was likely to prove that that they had nothing to do with the murders. Among other things, Berlinger, Sinofsky and a small army of supporters exposed severe misconduct by the jury foreman. New testing also found that the only DNA evidence at the rain-soaked crime scene did not come from the West Memphis Three or the victims.

Much of this exculpatory evidence was unveiled at a 2007 press conference. Almost four years later, the men were allowed to enter what's known as an "Alford plea," a plea bargain arrangement that lets defendants assert innocence while allowing that the state has sufficient evidence to convict them.

The Alford plea freed the West Memphis Three after 18 years and 78 days in prison. The documents that authorized their release included language stating that they could not sue the state of Arkansas for civil damages or pursue other forms of legal redress. Legally, they are still considered guilty of the murders. None of the officials involved in their prosecution will be punished.

Echols' attorney, Dennis Riordan, rails against the Alford plea in "Paradise Lost: Purgatory," saying that its main function is to perpetuate the illusion that the state is "free from error" and "is therefore divine."

At the HBO press conference, Berlinger said that among other things, the "Paradise Lost" movies were about "the moral outrage of capital punishment, because we see how officials act to protect their asses."

"People think this case is something out of the ordinary," he said. "But it's not. It happens all the time."

"Paradise Lost: Purgatory" is the third chapter in a series that started with 1996's "Paradise Lost: The Child Murders at Robin Hood Hills" and continued with 2000's "Paradise Lost: Revelations." The West Memphis Three were freed about a month before the new film was set to premiere at the 2011 Toronto International Film Festival. Berlinger and Sinofsky weren't able to construct an epilogue to the third film in time for the premiere, but they have since added one that brings the story up to date. This new section includes one of the film's most wrenching moments, a scene in which a newly freed Echols explains that Baldwin wanted to continue to fight for a complete reversal of their convictions. But he decided to accept the Alford plea to prevent Echols -- portrayed by authorities as the "mastermind" of the case and sentenced to death by lethal injection -- from being executed.

"I think he's actually a really great person for doing what he did," Echols said of Baldwin.

It's hard to overstate the importance of the three "Paradise Lost" movies. First and foremost, they're significant because of the filmmakers' (and HBO's) doggedness in tracking one case over nearly two decades, and inspiring a movement that got three innocent men released from prison.

But they're also historical documents that chronicle a period of intense social and technological change, and that show an extended community -- including the West Memphis three, their lawyers and supporters, the judges and prosecutors and police investigators, the Arkansas news media -- growing older and grayer before your eyes. It's like a criminal justice version of Michael Apted's "Up" series.

As Echols himself noted in yesterday's HBO press conference, the Internet wasn't much of a factor in American life when the trio went to prison in 1993. By 1997, though, it was significant enough to allow the Free the West Memphis Three movement to solicit legal defense money, attract celebrity supporters (including Johnny Depp, Eddie Vedder and Natalie Maines), and keep the case in the public eye. By the late aughts, the movement had a YouTube channel.

Between 1996 and 2001, moviemaking changed, too. The "Paradise Lost" films incidentally capture the medium's astonishingly rapid evolution. The first "Paradise Lost" represented the last gasp of old-school documentary technique; it was shot on 16mm film and edited on a flatbed. The sequel was shot partly on film and partly on video, and edited digitally. The third movie, which summarizes the previous installments and brings the story into the present, was shot with high-definition video cameras and edited digitally, but it also includes beat-up 16mm footage from the other two movies, grainy early '90s police videos, and flickering snippets of mid-1990s Arkansas TV newscasts that Berlinger and Sinofsky recorded on VHS cassettes. There are also haunting black-and-white film stills that Berlinger and the original film's cinematographer, Robert Richman, snapped during breaks in the 1994 trial. It's a virtual museum of the last two decades' worth of media technology -- a dazzling record of all the different ways in which reality was represented to the public.

The series is also a document of the evolving consciousness of the filmmakers, who started as detached observers but ultimately became activists fighting for the trio's release. I've followed Berlinger and Sinofsky's careers for over 20 years now, starting with their 1992 debut feature "Brother's Keeper." I recall from interviewing them in the late '90s that when they made the first "Paradise Lost," they were still trying to maintain the pretense of objectivity; they allied themselves with the 1960s tradition of direct cinema or cinéma vérité -- the "fly on the wall" style that pledges to observe without interfering.

But the longer they worked on the "Lost" series, the more unthinkable detachment became. The filmmakers got pulled into the case in 1994 when John Mark Byers, the stepfather of murder victim Christopher Byers, gave Berlinger and Sinofksy a knife with blood in the hinge, which they turned over to police. During production of the second film -- which showed how police and prosecutors had ignored or suppressed evidence that might have exonerated the defendants -- they were banned from shooting Damien Echols' appeal because Arkansas authorities viewed the first documentary as a P.R. disaster for the state.

Berlinger and Sinofsky also let Byers, a shambling giant and an incorrigible ham who some theorized was the real killer, to hijack the movie through sheer force of weirdness. The new movie exonerates Byers and suggests a possible alternative suspect, Terry Hobbs, the stepfather of Stevie Branch, whose DNA is consistent with evidence found at the crime scene. The film is careful to point out that the evidence is inconclusive, and that 1.5 percent of the U.S. population could fit the same genetic profile. It also contains scenes in which Byers talks to the filmmakers warmly, states that he believes in the West Memphis Three's innocence, and reads a letter from Echols forgiving Byers for anything he said about him publicly, and asking forgiveness in turn for suggesting that Byers committed the killings.

At the press conference yesterday, Berlinger told me he didn't regret giving Byers enough footage to hang himself with in the second movie, because "we were following everybody else's lead" -- but later he told me that he and Sinofsky were "only human." In addition to being documents of a trial and its aftermath, he said, the films were honest records of their own evolution as people.

I reminded Berlinger that when I interviewed him and Sinofsky in 2000, when "Paradise Lost: Revelations" premiered on HBO, the duo seemed torn between insisting that they were just storytellers who had no opinion on the case, and wanting to shout from the rooftops that Echols, Baldwin and Miskelly didn't do it, and that somebody else -- maybe Byers -- must have killed those three boys.

"I think the second film was the weakest of the three, by far, because we didn't really know what story we were telling, just that we needed to keep telling this story, and we didn't have the access that we had in the first movie, and we were struggling to figure out what the story was," Berlinger told me. "The second movie really came about because we were frustrated that the story hadn't really moved off the entertainment pages and onto the news pages. We were following the story, and the story was 'suspicion of Byers.' Remember, the Free the West Memphis Three movement hadn't really gotten off the ground yet. It was the late 1990s, the first film had been out a while, and I would be sitting there brushing my teeth and thinking, 'Oh my God, here we are years later, and those three guys are still in prison. My kids are taking their first steps, and those guys are still in prison. So the second film was a bit more activist in nature, because that's where [Bruce and I] were at.  The second film, looking back, was purely advocacy. The third film, I think, is a blend of those two instincts, storytelling and advocacy. It's also a record of our gradually figuring out what the proper role of a documentary filmmaker should be."

"We were not on a mission to get these guys out when we first went down there," Sinofsky told me. "We went down there thinking these guys were guilty! But once we met them and met their families and figured out what was really going on, we realized that was what we had to do. By the time we made the second film, we were much more open about that. And now here we are today.  The fact that these three guys are walking around free is truly joyous."