In a Salon interview, the acclaimed songwriter/producer discusses building on a legacy, not being trapped by it 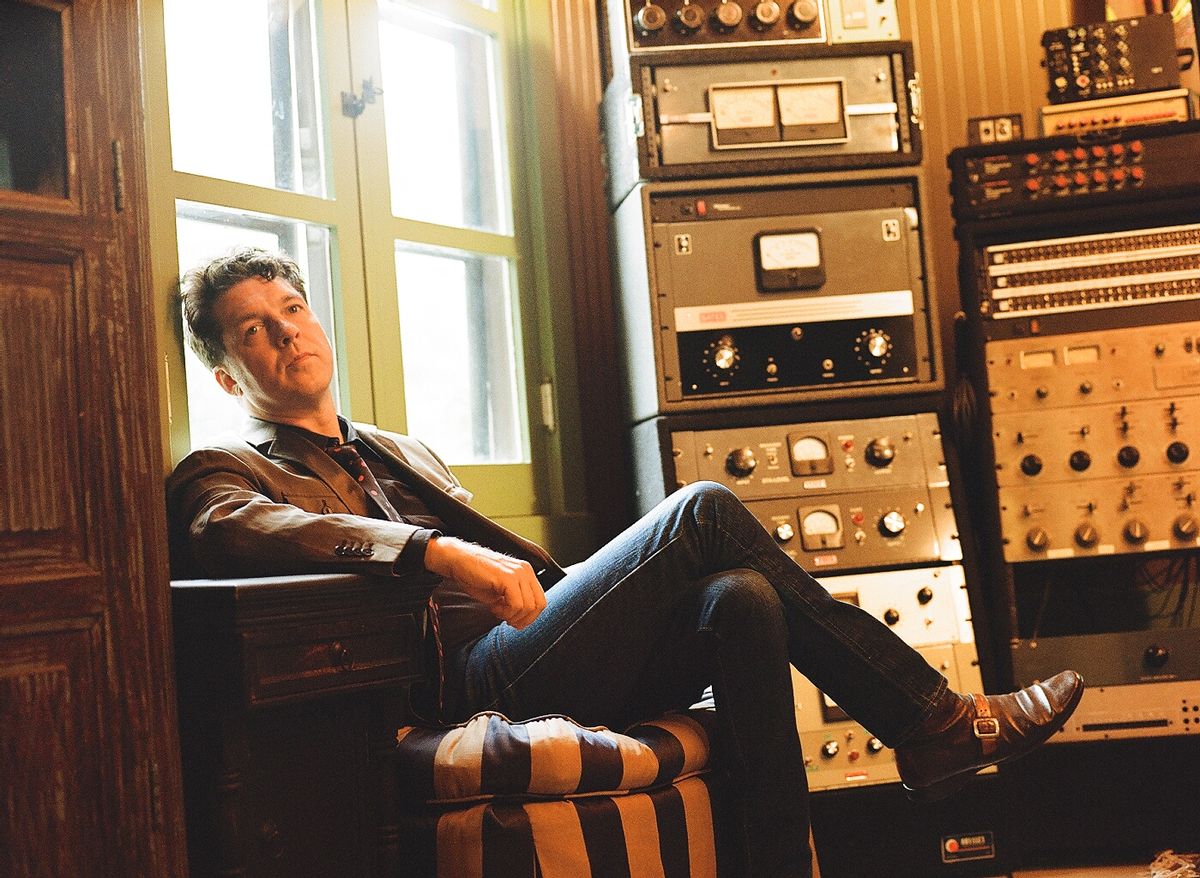 "Reverie," the 12th album by the singer-songwriter-producer Joe Henry, includes one song about the African-American folkie Odetta and another about the late Georgia eccentric Vic Chesnutt. Neither sounds musically influenced by its subject, yet like all of Henry's songs, both are heavily indebted to the past and the array of artists who came before him. The weight of American pop history weighs on every note and every word.

Throughout his quarter-century career, Henry has learned to shoulder that burden of history gracefully. Lumped in with alt-country in the 1990s, he has since been routinely compared to Tom Waits, Leonard Cohen and the Jayhawks, among others. Despite such praise, no one really sounds like Henry. Brandishing a dryly expressive voice and an impressionistic lyrical style, he obsesses over old blues, jazz, folk, rock 'n' roll and avant-garde composition, yet works to take those styles out of the past and set them squarely in the present. For "Reverie," which he recorded in the basement of his Los Angeles home, he restricted the musicians exclusively to acoustic instruments: guitar, stand-up bass and piano. The results sound both warmly familiar and completely new.

Henry brings the same acumen and range to his production work for a wild array of artists, most of them with careers twice as long as his. In addition to Bettye Lavette’s 2006 comeback "I’ve Got My Own Hell to Raise" and Solomon Burke’s Grammy-winning "Don’t Give Up on Me," he coaxed the legendary Mose Allison back into the studio for last year’s "The Way of the World," helped Loudon Wainwright III revisit some of his oldest compositions on 2008’s "Recovery," and updated Depression-era styles for recession-era America with the Carolina Chocolate Drops on "Genuine Negro Jig."

"Reverie" sounds much looser and rougher than some of your previous albums. Was that something you intended when you entered the studio or something that came out of the sessions?

Absolutely intentional. Most of the songs were already in place when I had a revelation of what I thought it should sound like. I was actually traveling. Not to sound too mystical about it, but I was in Barcelona and I was jetlagged and walking around in that hallucinatory state that traveling and jetlag can induce. I was hanging around the Picasso Museum and looking at his very early works. I don’t know what it was about that day, but it occurred to me in a flash that I was going to make an all-acoustic record and I was going to put us all in a room as close together as we could be. Not only was I going to leave all the windows open, but I was going to put microphones at the windows and invite the ambient sounds of the moment to be part of the fabric of the music. The songs that were yet to be written were finished with that idea in mind. Once the concept becomes clear, it’s like writing a play and it’s easy to see what scenes might be missing.

Did you have an idea of how that would sound, or were you working to figure that out?

I just knew that it would be interesting and beautiful to me to work that way — to set up close together, to allow that collision of sounds to become sort of like a fifth member of the band. I just knew how we would walk forward, but every record I make, for myself or anybody else, it’s always a revelation. I try never to have any preconceived notions. I just set something in motion and try my best to stay as open to it and as engaged within it as I can.

You seem like someone who flourishes within strict parameters, such as the rule about your band only using acoustic instruments.

You’ve worked for so long in so many different sounds and styles. What is your relationship to your older material? Do you still perform songs from the 1980s and 1990s?

The ones that feel alive and engaging I do play. I’m always more interested in the new songs than in the old songs, as far as performing. But it’s purely a matter of which ones offer me a way in. I don’t think of myself as jumping around sonically, however. I read that about myself sometimes, but I just listened to whatever that batch of songs was telling me to do. It wasn’t like I made an effort to speak with this vocabulary or put a costume on for any record. I don’t think about a sound that I then impose on the songs. I just listen to the songs and think about what environment will permit them to flourish. I like that each album has its own environment — its own look and feel.

When I made those couple of records — and it was only a couple of records — it wasn’t a movement. It was just a sound that fit the songs and fit my circumstances at the time. That sound came out of my work with the Jayhawks. We were both looking for ways to get some work done. They didn’t have the resources to tour on their own and neither did I, so we threw in together and hatched this idea to go on tour. It was so satisfying to work with them and plug into their collective voice as a band. But the songs I was playing at the time didn’t really fit their sound completely naturally. It was a stretch for them in some cases to make the songs in my bag at the moment feel as alive as their songs felt. So as an experiment I said, I’m going to write an album’s worth of songs with this concept in mind of us playing together. It wasn’t a stance I imagined adopting forever.

Can you talk about how your writing and recording process changed for 1996’s "Trampoline," which heralded a huge shift in your sound?

I felt really limited at that moment by the idea of going into a studio for three days and hoping that everything that needed to happen would happen in front of microphones. It was as if live performance in a studio with no audience was the only way to make a record. I had been doing that because I didn’t know any other way to work. But as I was gearing up to make "Trampoline," I desperately wanted to find a new way to work. I felt like I needed to retreat and work alone for a while and understand more about what I was hearing. I set up a really small space in my garage, the idea being that I could at least bring songs home and sing vocals as much as I wanted. Once I had this setup, I borrowed a drum machine from somebody and started writing backwards: Rather than working from the lyrics down, I started building tracks from the rhythm up. Then I found that I could treat my vocals very differently, rather than yelling over the top of a band. I realized I could push the vocals forward and place everything else around them. I’d never worked that way before and I found it wildly exciting and really liberating.

How does that experience inform your production work with other artists?

I’m a producer who’s always fighting for the vocal to be enormous in the picture. It’s the center of the compass. The needle can be spinning all around it, but it’s got to spin off something, and for me that’s the vocal. When I made "Trampoline" and then "Fuse," I was so enamored with the idea of sitting alone and inviting one musician at a time to come in and play something. I found that so liberating that I probably foolishly said out loud that I would never go back to making records by circling people in a studio and having them play live. And of course now that’s what I do all the time. I find it injects an intense focus in people.

You’ve produced albums for so many different kinds of artists. Do you see any commonality between people like Loudon Wainwright and Solomon Burke and Madonna [who is Henry’s sister-in-law]?

So many of the artists you work with have such long histories in American music. Even someone like the Carolina Chocolate Drops are mining a very specific vein of music tradition. How do you take that history into account in the studio?

When I work with an artist of the caliber of Mose Allison or Bettye Lavette, the challenge is always how do you do something that hasn’t been done before but is still authentic to who they are? How do you respect and build on their legacy without being trapped by it? That’s always the trickiest part of the equation, because you don’t want to put a funny new set of clothes on somebody just to be different. You have to understand that the work they’re doing now is connected to the work that they have been doing for decades, and yet you want it to be unique and not dependent on their reputation. I hope that you can hear the record I made with Mose and understand that it’s part of a greater story of a wildly significant artist. But I also hope that someone could hear it and enjoy it even if they have no notion of who he is.

There seem to be so many artists, especially in the New Americana movement, that sound more imitative than interpretive. How do you avoid that pitfall?

Sometimes it’s a subtle distinction, and sometimes it’s not subtle at all. When I made "The Bright Mississippi" with Allen Toussaint in 2009, almost all of the music came from the ‘20s and ‘30s and ‘40s, and yet he had never listened to that music and had certainly never played it. So he was approaching it with a sense of its history, but it was incredibly vital and fresh and new to him. The issue became, how do you take up old music and allow it to speak in the present tense? If it sounds like you’re retreading something, that’s death to the music. I talked to Hugh Laurie about this a lot too, because we made a record that’s Depression-era piano-based blues music mostly coming out of New Orleans. At one point he asked, am I allowed to interpret “St. James Infirmary,” because it’s been done and it’s been done brilliantly for decades? My response was, if you love it, you’re not only allowed to engage with it, you’re obliged to. The music asks to be engaged. It doesn’t want you to be repelled from it just because Louis Armstrong played it so brilliantly in 1927. It’s death to a song to become so important and so precious to us that we’re afraid to get near it and pick it up.