We bonded over a passion for cuisine, but it was our relationship that left me craving more 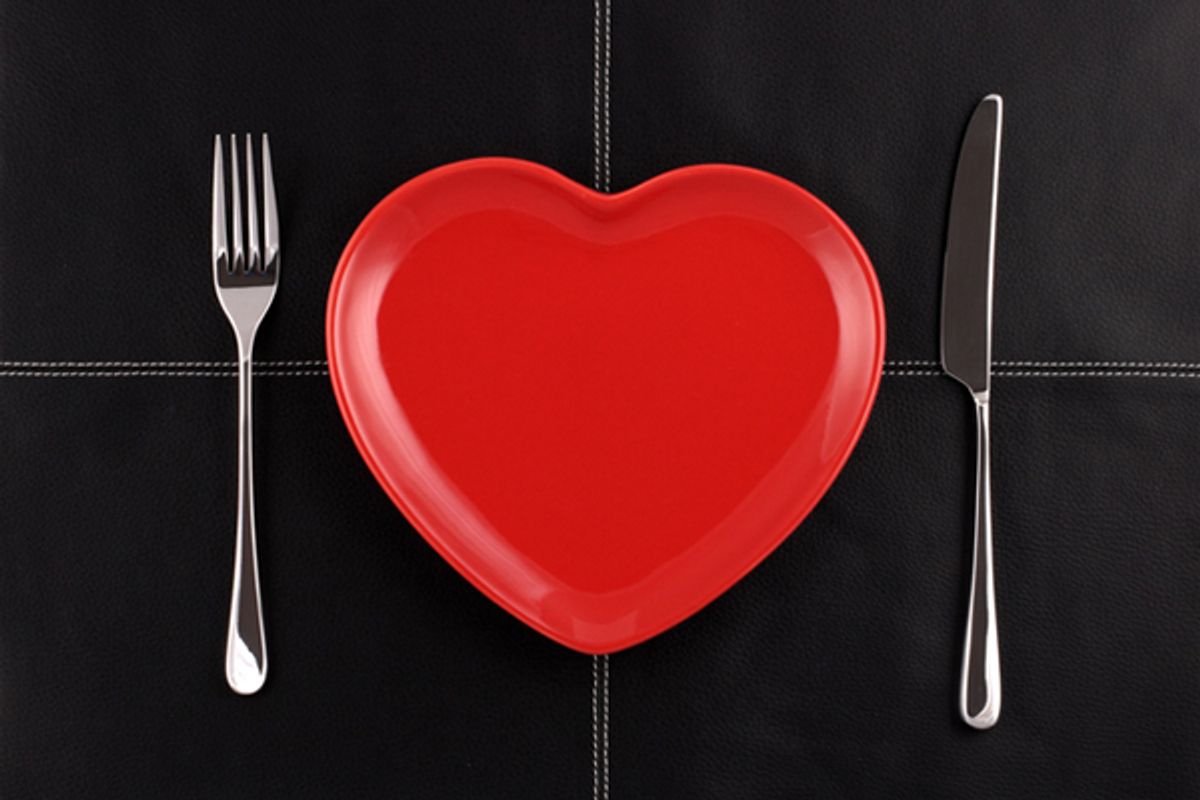 When Mike snatches the seat beside me on a bus from Washington to New York in September of 2008, he strikes up conversation so fast I hardly have time to recognize how handsome he is: dark Mediterranean features, Roman nose, slightly pockmarked skin. For two hours we banter with ease about movies and basketball and jobs -- I work in public radio, he's studying graphic design.

I hesitate to pull out the glossy new cookbook I'd grabbed on my way out of the office, fearing judgment. But somewhere north of the rest stop and south of Philadelphia he mentions his former career as a chef. I buckle.

"Are you kidding?" I say with mock drama, as though he's asked if I've ever heard of chocolate. "Do I know her? I love her."

As the bus winds along the New Jersey Turnpike and crawls through midtown traffic, Mike and I leaf through "Giada's Family Dinners" -- photos of Ms. DeLaurentis and her large-headed offspring posing beside various culinary creations. Our forearms sidle closer with each passing exit.

"Mmmm, look at those ricotta gnocchi."

"What do you like to do with acorn squash?"

We both love food: cooking it, eating it, sharing it with others. But in this moment we are indulging a different sort of pleasure, one that isn't about taste or hunger or any sort of physical satisfaction. It's about the singular ecstasy of longing for something that isn't real.

This joy is something on which I depend.

I'm lazing around one Sunday afternoon with my roommate, the day after a party -- our house still dotted with frosted cupcakes and stray cans of half-drunk PBR -- when she wonders aloud what I'm looking at.

"Brownies?" she asks. "Flank steak? Some kind of apple tart?"

I'm not hungry. We've spent most of the afternoon grazing on leftover chips and chili. But, as my roommate knows, the images soothe me. They distract from the anxiety of what I'm doing with my life. From fretting about the flaky farmer I've foolishly hooked up with the night before -- again. I am not looking at food because I want to eat it; I take pleasure in the looking itself.

I meet Mike six weeks before quitting my job and moving to Albuquerque for graduate school.  So when he tells me -- after two successful, surprisingly intimate dates -- that he doesn't have time for a girlfriend, I assure him things can't get serious anyhow.

And somehow, I am. We see each other only on weekends. We cook dinner. We watch independent movies at the Landmark Theatre on E Street. We spend Saturday nights in bed and on Sunday mornings, walk to the Farmers Market at Dupont to sit on the grass and people-watch with piles of locally grown apples and fresh almond croissants.

And after I move, Mike is the first to get in touch.

Over the next year we trade occasional messages and see each other when possible. He's back with his ex-girlfriend; I date other people: a tall labor lawyer from Michigan who seems perfect but doesn't give me butterflies; a linguist with perfect bone structure, beautiful blue eyes and a serious addiction to whiskey. I panic that I'll never find the balance -- passionate physical chemistry and a healthy emotional connection. I think of Mike. And then, he writes: "Just saw an episode of 'Top Chef' featuring Nigella, made me think of you. Let me know what you're up to over the holidays."

We make plans to cook together and I tell my girlfriends I should probably go ahead and propose.

"How about you ask him to come visit?" they suggest.

"Now that," I reply, in complete sincerity, "sounds scary."

At least, that's what Anthony Bourdain says. In a 2001 commentary for the San Francisco Chronicle, he admonished readers to embrace an actual relationship with food -- rather than just "gaping" at pictures of the stuff.

Over the dinner Mike prepares me at his Mount Pleasant apartment (chicken sautéed with olives, tomatoes and green beans) conversation flows seamlessly -- families, books, school. He remembers my niece's name!

"Can I ask you something?" he says, his fork in midair. "What do you think about us? Because I think about it a lot."

I swell with excitement as he goes on to list the things that remind him of me (the Decemberists, Michael Chabon, hipsters). We hold each other on his roof, talking about how great life would be if we lived in the same city and about the breakfast sandwiches we'll get from the Mexican place across the street in the morning. We spend the rest of the weekend in bed, telling each other how rare our connection is and looking, together, at pictures of food.

"You should look for flights to come visit," I tell him, the night before I leave.

Back in Albuquerque, I don't hear from him for three weeks.

Stylists use things like glue to make a bowl of cereal look good. Bacon gets glossed with soapy water. Seeded rolls and bagels, slathered with Vaseline.

The contents of those photographs are only meant to look good -- not to taste that way.

When Mike finally emails, it's only a few lines and two of them are about basketball. I write back and tell him I'm disappointed. If he truly wants to know me, he should know that I'm not, actually, a dude: "I'm a kind of neurotic woman," I write, "and I can't apologize for that." I can't imagine how he'll respond. He doesn't.

On a visit home that summer, I prop my feet on my mother's lap and tell her the story.

"Have you called him?" she asks.

I look at her, incredulous.

"Sometimes, when you confront men with emotion," she says, "they don't know what to say. So they don't say anything."

The next day I amble around Union Square and take slow, deep breaths as I pull up his contact and touch my finger to the green button that says "call." He answers. We spend an hour catching up before I tell him I have to get on the train. It feels so good, so easy to talk that I don't push him for the explanation I know I deserve.

"I think we do better over the phone," he says.

By the time we get together in Washington that Christmas, we're talking multiple times a week -- always for an hour or more. We date other people and give each other sincere romantic advice. But as we make plans to cook together over the holiday, both of us know where it will lead.

"We've been talking kind of a lot," he says, his eyes staring into mine at the bar where we meet for a bottle of red wine.

I nod. But I don't respond. We sleep together that night, and spend the following day cooking and watching movies on the couch. We kiss goodbye outside on Mount Pleasant. We don't say anything about our feelings.

When I think about Mike, my mind fills with scenes of our idyllic domestic future:

Back in Albuquerque I start to date a caring and reliable fireman who is generous with affection and cooks me health-conscious meals for six months before breaking my heart. Mike and I talk some during that time, but often, I avoid his calls: The fireman and I have a good connection, but my banter with Mike makes ours pale.

Part of me wants to tell Mike that I compare everyone to him. That I can't imagine having better chemistry with anyone. But the bigger part of me is terrified that he will reject me, that learning the truth will destroy the fantasy.

I don't know what it would be like if Mike and I were together. But I have the images. And, in their own way, those satisfy. They don't fulfill the desire for intimacy, just as pictures of food don't satisfy hunger for it.

But there's happiness, too, in the longing.

Elizabeth Tannen writes the blog Dating in the Odyssey Years. She is a former NPR producer and, currently, a candidate for an MFA in Creative Writing at the University of New Mexico.