It\'s party time at the Range, where weekly sundown concerts draw squattersville residents -- and even tourists 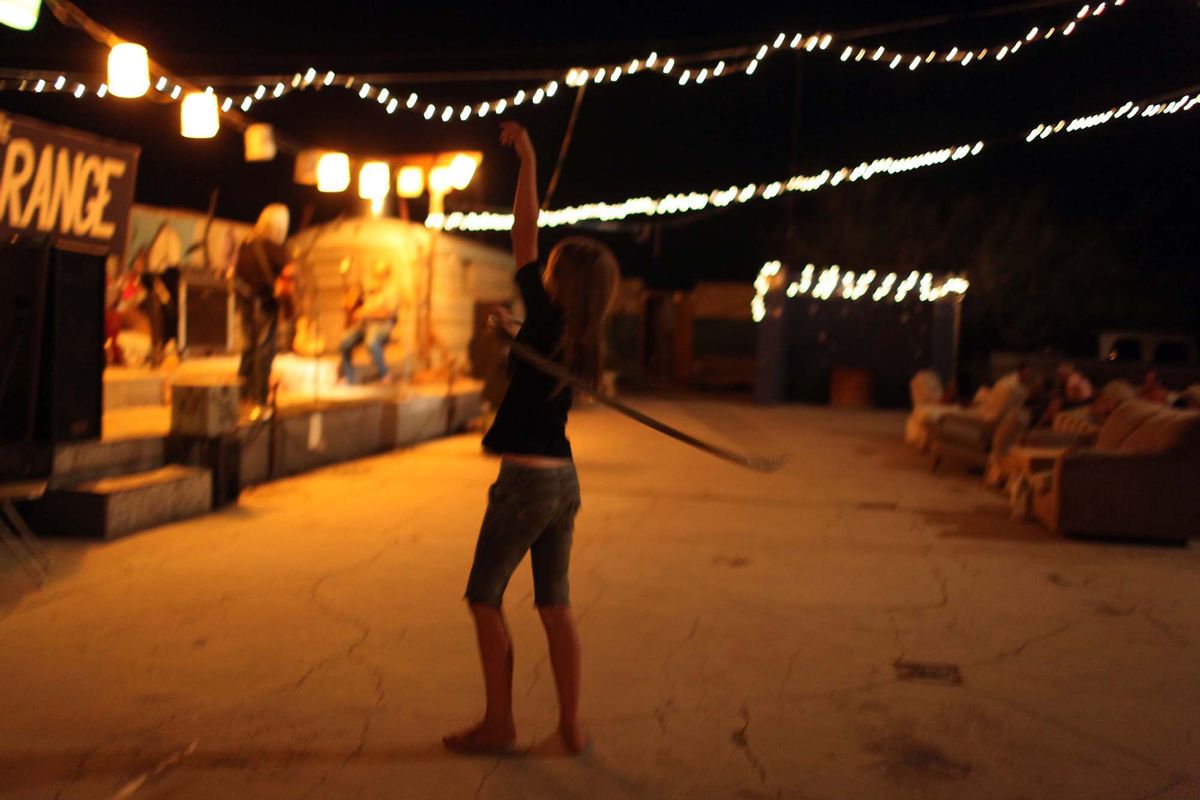 An 11-year-old girl hula-hoops while listeneing to the music at the Range in Slab City. (Misha Erwitt)
--

This is Part 2 of a two-part series on Slab City. Read Part 1 here.

SLAB CITY, Calif. -- A punishing sun was finally giving way to night, and that meant show time at the Range.

In the desert of southeastern California, about 190 miles east of Los Angeles and 127 feet below sea level, people filed out of trailers and trucks and buses and headed to a stage built on a concrete slab. Under rows of Christmas lights and a million stars, they took their seats on busted sofas, junked lawn chairs, the extracted back seats of old sedans. Then they started hooting. William "Builder Bill" Ross had strapped on his six-string.

"Good audience!" he said, and people hooted some more.

It was Saturday night at Slab City, when people who live here will tell you that the best of the Slabs is on display. Not just the performers who play the Range, but also the audience. Everyone in this remote squattersville off the grid and off the map shows up: the hermits, the tweakers, the preachers, the old-timers, the newcomers, the families.

These weekly sundown concerts at Slab City, made famous by the 2007 film "Into the Wild," are always packed come November, when trailered retirees from all over the country come here to live free for the winter. But in the last few years, the wretched economy has brought more people who've lost everything to Slab City than ever before, and the concerts fill up all the time. About 150 people show even in high summer, nearly double the summer population of Slab City just four years ago.

People come in a party mood, toting six-packs and fifths of whiskey and gin. Dogs roam the stage. Even the families who tend to park far from Slab City's main drag, fearful that the Imperial County Child Protective Services will take their children away -- it does happen -- come to watch and perform.

"No, no, don't talk to me," a woman with three towheaded children of elementary school age said when approached on a recent night. But otherwise, she seemed happy.

Everyone seemed happy. And Slab City, which likes to bill itself as the last free place in America, a community built by hobos and hippies out of concrete slabs left by a decommissioned WWII-era Marine base, almost seemed like the carefree bohemian haven shown in "Into the Wild."

The reality is more complicated, of course. People in Slab City are not just very poor, living off SSI checks, if they're lucky; they've survived more than their share of hard knocks. As Patrick McFarland, the pastor of the Slab City Christian Center says, "Everyone here is damaged in some way."

McFarland calls Slab City "the Last Stop," the endgame for people who've played all their moves in society and have nowhere else to go. That seems fitting. Everyone in Slab City has some sorrowful story. Some can't bring themselves to discuss it, while for others, the story gushes out right after "hello." Someone they loved died a horrible death, they lost their children and money to divorce, their best friend robbed and cheated them. They got cancer.

Even the newcomers, who say, "It's the economy, stupid," when asked why they're here, have complicated tales to tell. If you want to know how people end up in a squatters' camp these days, the Range would be a good place to start.

"My sisters bought me this 35-foot camper after my mother died and told me to move out here," said Glenn -- just Glenn -- who moved to Slab City last January.

He had been caretaking his mother for 15 years, he said; then, at 55 years old, he found he had nothing on a résumé to impress employers. No one would hire him. Plus, he had a drug possession conviction, for a small amount of heroin.

"I'm unemployable," he said, sitting on sofa with his lab mix, Oprah. In a booming economy, he brooded, he would have a job. But 55 is so much older than it used to be. "I know a lot about computers, I can design websites, but who would hire me?" he said. "In a month, I get the last of my inheritance checks. And then what will I do?"

He is better off than most slabbers. His camper has a kitchen, a shower, access to the Internet. He does not rely on the ministries that come to Slab City to give him food. Still, he has found Slab City a difficult adjustment. He is neither a hobo nor a hippie. He does not like communal living. "I'm parked way over by myself," he said.

Plus, after San Diego's perfect weather, he was unprepared for the 125-degree days of August at the Slabs, when just walking from one end of his camper to the other took all his energy. He didn't like the winter sandstorms, either, which send slabbers running with their arms over their faces, as though locusts were raining down.

Newcomers keep discovering that Slab City is not for everyone, or even most people. Charlie B -- so many people in Slab City are coy about revealing their real, full names -- had moved here last January. He had gotten divorced, then lost his job after he got cancer and couldn't find another. And that was it. Life was too hard, and too short to keep trying to get by.

"My dream was to go out on Route 66," said the 55-year-old native of East Tennessee. "I got here right before Christmas, before the sandstorms and the summer. It seemed just fine at the time." Now, he is thinking of leaving by February.

James Edward, who moved his family to the Slabs nine months ago from Alabama to wait out the recession, said he and his wife were rethinking the move because of their children. A school bus takes their 11-year-old daughter and 14-year-old son to Calipatria, 12 miles away. But the children refuse to let friends see where they live, Edward said. And there are few other children in Slab City. "They hate it," he said.

But "Drummer Gene" Malone, who ended up in Slab City three years ago after giving up his landscaping business in Staten Island for a woman in Oregon who left him, said his move was an unqualified success. He was free now. "It's kind of like living in a carnival here," he said. He had let his hair, mustache and beard grow, to odd lengths, and had stopped bathing.

"I've always been in bands," Malone said, swigging Jack Daniel's, slurring his words, "and now I get to play and not deal with anything else. What could be better than that?"

Some success stories here are genuine. Builder Bill, so dubbed because he created Slab City's Range and co-founded its winter-only cafe, the Oasis Club, was an alcoholic, homeless in San Diego. Then, tired of being chased by police he knew by name, 12 years ago, he moved to Slab City.

He stopped drinking and started evaluating how he might live the rest of his days. Slab City was smaller back then, with maybe 50 year-round residents, and many of those were dying off.

"There was a kind of community here," he said, "but they were such independent sorts that there really wasn't a community. I thought, 'I'm on the other side of 50. How the heck am I ever going to meet people, meet that someone, this way?'"

So he built the Range, using two old buses to hold equipment and the generators used to power the lights, the microphones and everything else. He built a refreshment stand out of scrap wood. He gathered old chairs and sofas from junk heaps. People started organizing shows at the Range. And Builder Bill, now 62, met his goal. "I met my girlfriend here," he said.

Several couples have courted and married at the Range in the last 10 years, though the ratio of men to women here is about 10-to-1.

Among committed slabbers, the idea of community spaces became contagious. One slabber, who has since died of breast cancer, decided to create a library. She gathered books donated from local libraries in Imperial County and created the Slab City library, "Open 24/7" on the honor system.

A few years ago, Builder Bill said, his girlfriend started the annual Slab City prom, where couples dress up in donated gowns and tuxes and vie to be king and queen of the slabs. The Range also hosts talent shows, plays, poetry readings.

And the Range has become a big tourist draw. The week before, a Danish film crew came to tape a concert.

The crew even staged a video op by having slabbers light a fire in a trash can off the stage and stand around it, just like they saw in "Into the Wild." It was 99 degrees, but the slabbers obliged.

Builder Bill didn't sing or play before he built the Range. And while Slab City seems to have more than its share of people who are musicians or at least musical, it keeps bringing out the performer in people.

The other night, one of the newcomers, a girl no more than 16 years old, probably younger, was introduced by her father, who was fairly busting with pride.

Like most performing slabbers, she sang a song she wrote herself. It went on and on and everyone was very polite. "No pictures!" the father barked at a photographer as she sang. But he encouraged everyone to applaud, and everyone did.