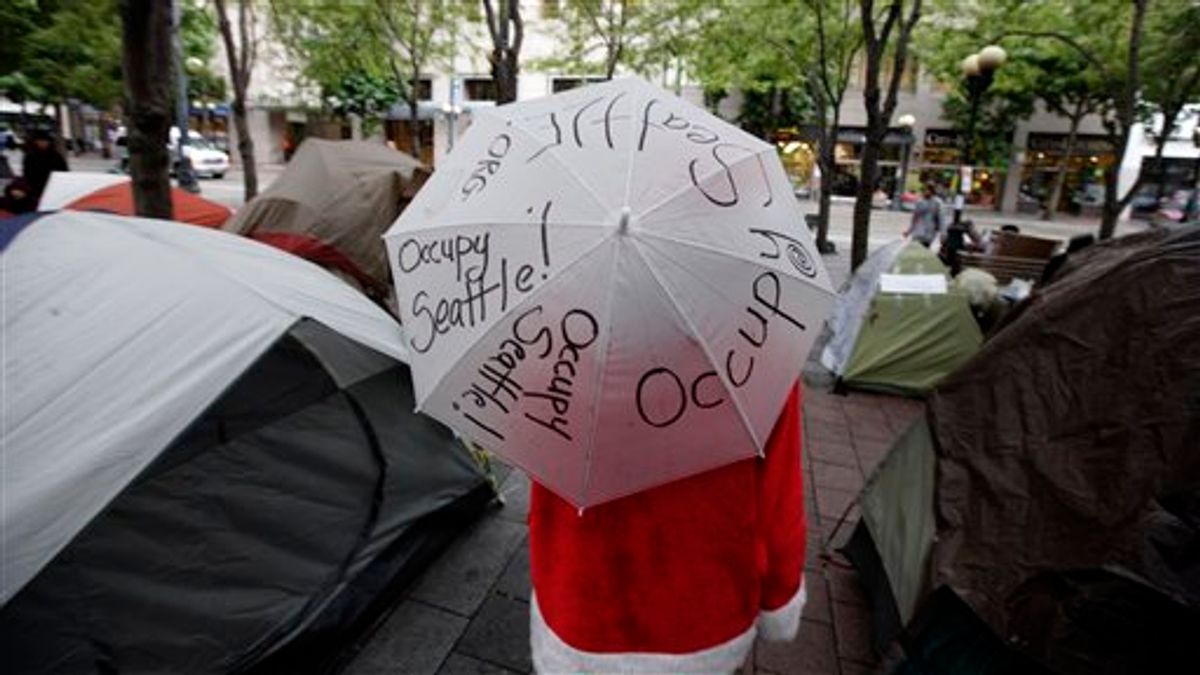 Miles Partman carries an umbrella with "Occupy Seattle" written on it as he walks though an encampment in downtown Seattle's Westlake Park, Wednesday, Oct. 5, 2011. (AP/Ted S. Warren)
--

Occupy Wall Street protests have now spread to dozens of cities across the country, and each city's leadership has responded differently. Seattle Mayor Mike McGinn, for his part, has claimed more reserved approach to dealing with demonstrators than his counterparts in Boston and New York. That might not be the case for long.

On Monday, Occupy Seattle demonstrators were warned to leave their nearly two-week-old encampment in the city's Westlake Park -- which closes at 10 p.m. each evening. Protesters resisted the order despite the threat of arrest, and the mayor's office ultimately allowed them to remain in the park overnight.

According to the Seattle Post-Intelligencer:

[A]round midnight, a staff member of Seattle Mayor Mike McGinn appeared at Westlake Mall and said no arrests would be made overnight, according to Occupy Seattle organizers. That staff member, who refused to address the media, said the same would not be true for Tuesday night, protesters  said.

By midnight, all but one of the police officers who were at Westlake Mall had left.

McGinn posted a letter to his official website explaining the decision to hold off on arrests:

The rule prohibiting camping in parks is a long-standing provision of the Seattle Municipal Code, which has previously been communicated to event participants. We continue to make City Hall available, which is an appropriate facility for camping associated with protests.

The city generated criticism over the weekend for its decision to ban any umbrellas (a Seattle necessity) not held by standing persons. That means no sitting if you want to stay dry. Police also began ticketing any drivers who honked in support of Occupy Seattle on Friday night, and arrested several protesters earlier last week,tearing down pitched tents in the process. Mayor McGinn has, however, expressed support for the goals of the movement.

Occupy Seattle organizers say they've been given 24 hours to propose an alternate camping location. They have not, however, evinced plans to relocate through either their Twitter or Facebook accounts -- though they have warned participants to prepare for rain.