He's back from the political dead -- and he's stolen Rick Perry's debate seat! 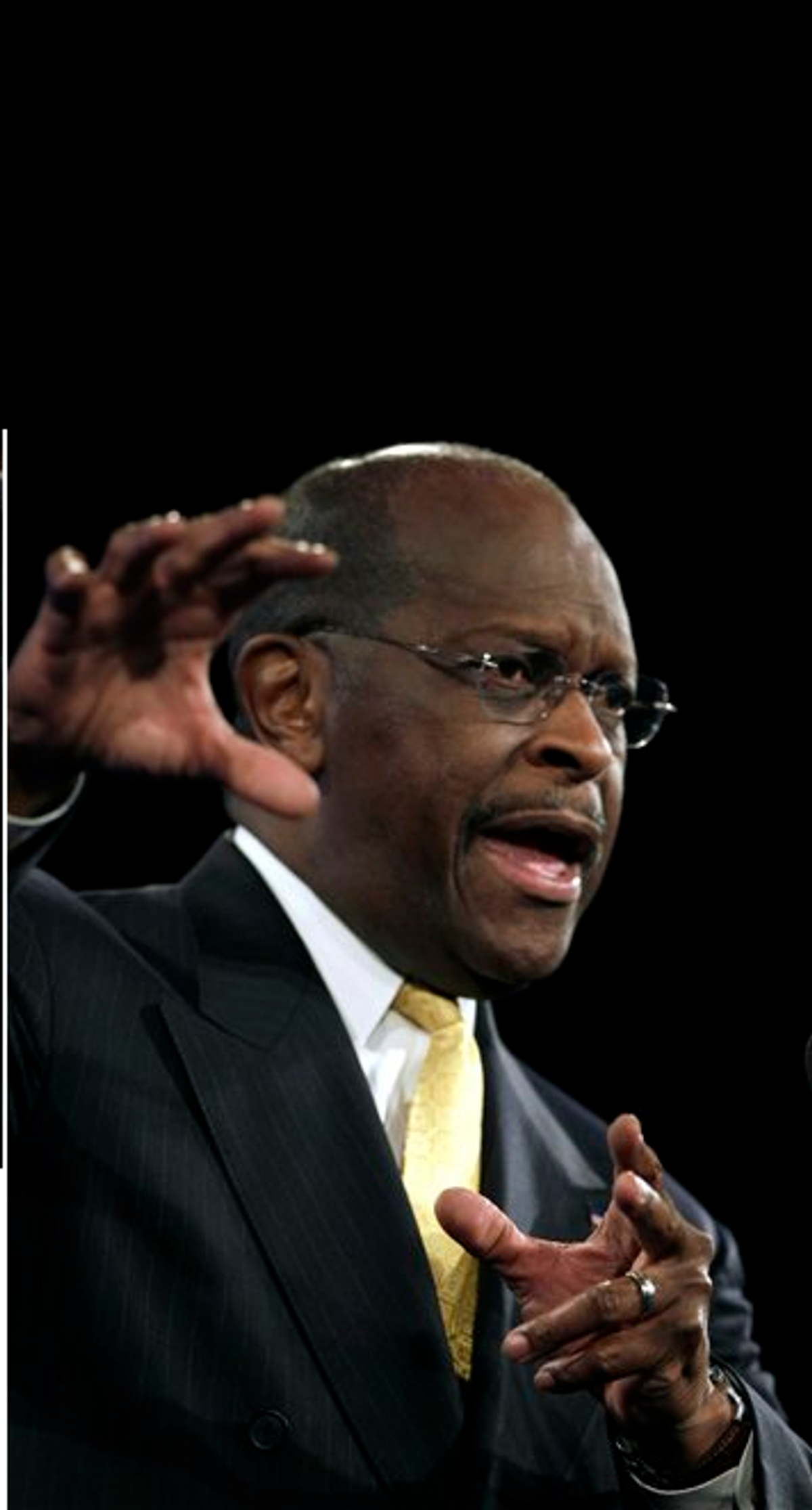 When Chris Christie once and for all declined last week to seek the Republican presidential nomination, it seemed to set up a relatively straightforward two-candidate race between Mitt Romney and Rick Perry. Which makes what happened to Perry in the run-up to tonight's debate in New Hampshire particularly embarrassing: He was bumped from one of the two marquee seating spots for Herman Cain.

This, of course, is a product of the steep erosion in Perry's support since the last debate three weeks ago, which triggered a flood of critical commentary from conservative opinion leaders. But it also speaks to Cain's remarkable, and thoroughly unexpected, success in corralling a big chunk of the Perry defectors and rising from near-dead status to second place (and closing) in the GOP race.

A Washington Post/Bloomberg survey released yesterday afternoon puts Cain at 20 percent nationally, just 2 points behind Romney and well ahead of Perry (12 percent) and the others, while a Gallup poll that came out overnight has Cain trailing Romney 20 to 18 percent. He's also on the move in New Hampshire, where a new poll puts him in second at 20 percent (with Romney at 38). Just a month ago, of course, Cain was barely registering in any polls.

Suddenly, the stakes for tonight's debate are almost as high for Cain as they are for Perry and Romney. As the occupant of one of the middle seats, he figures to be asked more questions this time around -- questions that will probably be more pointed and "gotcha" in nature than the broad, obligatory queries that he's been stuck with at past debates. Aggressive follow-ups, whether from the moderator or from his rivals, are also more likely. It must drive Rick Santorum and Michele Bachmann mad watching Cain become a conservative grass-roots sensation, the role they hoped to play themselves. Either of them may see this as a chance to show those voters what a mistake they've been making. Even Perry may have some incentive to go after Cain, because the more viable Cain becomes, the more it complicates Perry's strategy of unifying the right and knocking off Romney. (Of course, after his painfully incoherent attempt to read Romney the riot act in the last debate, Perry may not be eager to pick many fights this time.)

If Cain can handle the spotlight well, the Republican race could become a lot more interesting, and its outcome a lot more difficult to predict. (This will be especially true if Perry also has another feeble outing.) A new poll in Iowa, where the lead-off caucuses are now less than three months away, is due to be released this afternoon, just before the debate. Presumably, it will mirror all of the other recent surveys, with Cain soaring into contention, maybe even the lead. He is probably, in other words, a real contender in the Hawkeye State, a development that Perry's entrance back in August was supposed to make impossible. And a Cain win in Iowa could spill over into other states. That he's at 20 percent now in New Hampshire, Romney's firewall, suggests that a strong showing there is possible. And South Carolina, where the Christian-dominated GOP electorate may be more resistant to Romney, looms as potentially fertile territory for Cain as well. This could end up being a legitimate three-way race -- or even (gasp) a two-way contest between Romney and Cain. (The same Herman Cain who's only previous political campaign ended in a 27-point defeat in a primary for the U.S. Senate in Georgia!)

What's particularly amazing about Cain's surge is that he's apparently contemptuous of what is generally basic campaign strategy. Cain has barely spent any time in Iowa, and isn't scheduled to be in the state again for weeks. Nor has he been a frequent visitor to New Hampshire, and he doesn't have a meaningful organizational footprint in either state. Also, his press secretary just left to become the spokeswoman for a candidate for lieutenant governor of Louisiana -- hardly an encouraging sign for a presidential aspirant. Cain is mainly relying on television interviews, debates, media coverage and buzz. You can make a good case that this will destroy him in the end -- that if he's near the lead in polls on the eve of the Iowa caucuses, he'll lose several critical points (at least) in the final results because of his poor to nonexistent campaign organization. But for now, it's working far better than anyone would have expected.

Why? The simplest explanation is that Cain is a genuinely charismatic speaker who projects confidence, warmth and good humor. He's easy to like, a particularly valuable attribute given the competition. Plus, he tries hard to hit all of the notes Obama-era conservatives want to hear. If he stumbles and says something that the base doesn't like, he'll correct himself immediately. There may also be a bigger reason why Cain, of all the second-tier candidates, has been the main beneficiary of Perry's fall, and Jamelle Bouie -- who watched Cain steal the show at last week's Values Voter Summit -- explained it:

But that doesn’t explain his rapid rise to the top. Insofar as anything does, it’s this: To many conservatives, Cain offers absolution from racial guilt and a unique chance to turn the tables on liberals who accuse the right of racism. When Herman Cain says that he isn’t angry about the treatment of blacks during Jim Crow, he’s offering racial grace on the cheap—a chance to feel good about race without actually doing much. This is what differentiates Cain from everyone else in the GOP field, and to many Republicans—including the ones at the Values Voter Summit—it’s all he needs for their support.

Of course, it's also true that Cain has been here before -- and then vanished overnight. This was back in the spring, when he turned in a strong performance at the first debate, after which his polling numbers and fundraising took off. Then came the second debate, at which Bachmann seized the spotlight, prompting Cain to return to virtual anonymity, until the past few weeks. In this absurdly volatile Republican race, polling surges have been cheap and fleeting, for Cain and for others. So while it's possible that he'll end up being a real factor when the primaries and caucuses kick off in a few months, it's just as likely -- if not more likely -- that Cain's picture will be on milk cartons by then.

That's the risk of tonight's debate for him: An underwhelming performance could end all of the fun and excitement on the spot. (Jonathan Bernstein makes a strong case that this will probably happen, mainly because Cain just isn't fit to play a starring role in a debate.) Or, for that matter, a well-received performance by Perry could have the same effect, winning back the confidence of Republicans who flocked to Cain these past few weeks. So savor this moment while it lasts; it's not that often that a pizza guy manages to upstage an entire field of presidential candidates.