The pro-OWS voice you won't hear at the GOP debate 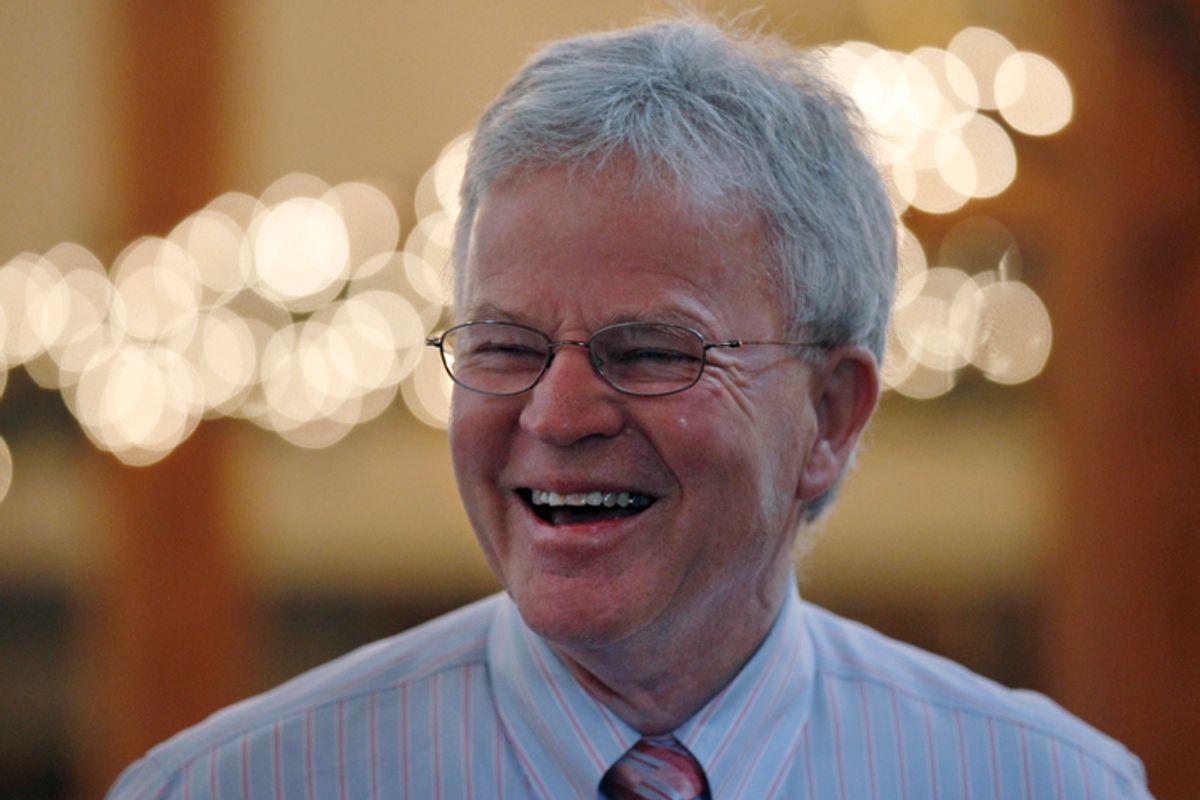 Buddy Roemer won four races for Congress in the 1980s, was elected governor of Louisiana in 1987, and then after being defeated for reelection (by an ex-Klansman and a future convicted felon) in 1991 went into business, serving as CEO of a midsize bank. He is also running for the Republican presidential nomination -- not that you'd ever know it. Even while candidates with far less substantial political experience have been invited to the debates, Roemer has been shut out, a streak that will continue when eight other GOP candidates gather in New Hampshire Tuesday night. (Instead, he'll be watching on television and tweeting along.)

Roemer, who turned 68 a few days ago, admits that "this has been the most frustrating experience of my life," and it's easy to understand why: Just look at the meteoric, debate-aided rise of Herman Cain, a fellow CEO who was drubbed in a Republican Senate primary in his only previous bid for office. The case against putting him in is simple: The stage is already too crowded and time is already too limited -- so why throw in another hopeless long shot if you can avoid it?

Which is why what Roemer has been doing lately is so interesting. While his fellow candidates and most Republican leaders have been jumping over one another to condemn the Wall Street protesters, Roemer has loudly endorsed the demonstrations, invoking Theodore Roosevelt and challenging the GOP to rethink its reflexive defense of the banking giants. In so doing, he has provided a strong case for a debate invitation: The stage may be packed, but there's no one on it now who wants Glass-Steagall reimplemented. Roemer does, and he says it's part of a broader debate the GOP needs to have. Salon spoke with him on Monday afternoon about his uphill fight. (Some answers are edited for length.)

Maybe we can start with an update on Tuesday’s debate. What kinds of conversations have you had with the organizers and what have they told you?

I spoke to Al Hunt -- he’s managing the debate for Bloomberg. And Al did not give me the details, but I complained about the fact that the criteria are ephemeral and late in coming to the candidates. And I asked Al: Who else is going to say [what I’m saying]? And he said, “Well, there are only eight slots, and I don’t know, Buddy.” There was no answer.

And this is a long strain of either no-talk or double-talk. Now I’m not picking on Al. He’s a fine journalist, and he’s just representing the sponsor at the latest in a line of non-debates. I mean, I look at what we’ve got now in the Republican Party is Tweedle-Dee and Tweedle-Dum. They’re saying all the same things. And maybe the Republican Party and the nation would be better served if there were a debate where issues like money and politics and international trade were actually asked and answered. You can tell I’m unhappy about this. I have no chance if I can’t get in a debate. I am a limited-funded campaign. I did that deliberately. I have a $100 limit. No PACs, no SuperPACs. This is my campaign -- that the president will be responsible to the plain and average person, and that day is gone.

Well, I guess to be blunt about this, the basic excuse they might have in mind probably goes something like this: 20 years ago, he lost to David Duke in a governor’s race, he lost a comeback four years after that, and he’s kind of vanished since then. So why should we have to put him in a debate now?

You know, Mitt Romney lost his last two. Herman Cain has never won one, OK? I mean, if you just want to get down to what people do in politics, I beat the best and the biggest – and the most corrupt. And they worked their butts off for years to try to beat me. I wouldn’t change a thing. And when I ran for reelection as governor, it was clearly shown in the polls that my changing parties in a one-party Democratic state would hurt me. (Roemer switched to the GOP in the spring of 1991.) I said, I don’t care, we need a two-party system in Louisiana, and I’ll lead the fight.

Yeah, one of the Republican candidates called them un-American.

…where does your perspective on this come from?

When I see CEOs of banks get a thousand times the pay of their average employee; when I see the top 19 banks in America on Wall Street be propped up by the taxpayers and then treat them like dirt; when I see more homeowners going to prison than I do corrupt banking officials; when I see the president of the United States sign a banking reform act that doesn’t reform a damn thing and then he goes to Wall Street two weeks later for a fundraiser at $35,000 a ticket hosted by Goldman Sachs; when I see a nation where 9 percent of the people are unemployed, 3 percent of the people have quit looking, and another 10 percent of the people are working only part-time and can’t sustain themselves; then I applaud young people, middle-class people, senior citizens who stand up with signs and say, “Why, America? What are we going to do different?”

I happen to be a banker. My bank is two-thirds of a billion dollars. It’s profitable. We take no bailout money. I mean, it can be done. This is not magic time. I’m not talking theory and I’m not some lawyer or some politician talking about what ought to be; I’m a very practical, competitive businessman. I represent my American business clients all over the world. I know this business. We’re filled with unfair trade with China and nobody stands up to them. And our big banks are takings risks they should not take, and they’re forgetting lending money to the average American company. It is a disgrace.

I remember when Wall Street was a place that a company would go to raise capital. That doesn’t happen anymore. Wall Street has become a place of high salaries, specialized and I think fraudulent products, and international trade. Where does America go for capital now? It’s not Wall Street.

Why do you think so many on the right are resistant to that point? Because I hear what you’re saying about Romney and Cain and corporate backgrounds, but when I listen to, say, Rush Limbaugh on his show – he’s been relentlessly hard on the protesters, and just doesn’t seem to see Wall Street the way you do.

I really don’t know why that is. As a Republican, I didn’t feel I could sit this election out. I felt like I needed to try to make the point about money and politics, particularly when President Obama is the worst we’ve ever had at putting the money first. I mean, barely two years into a four-year term our president announced for reelection – I think that’s a mistake – and then he proudly said that he would raise a billion dollars. Well, where does that billion dollars come from? It comes from the very people he’s trying to regulate: insurance companies, pharmaceutical companies, tort lawyers, Wall Street banks. My God, America!

And your question is, why don’t many Republicans see it? I don’t know. And I would come to that and say: They’re not alone. Many Democrats don’t see it either. They are bought and sold by the special interests. And nobody in either party is standing with me to stop it. I know there are better people than me running for president – surely there are. But I haven’t found them yet, and nobody stands with me on the money. No one.

My sense is that there’s a particularly compelling critique of Obama from within the Democratic Party, that would be it. You just expressed it almost perfectly there. It almost makes me wonder if you’re pursuing this campaign in the wrong party …

Well, I don’t mean to be cute, but so many people on the left are frustrated that Obama hasn’t spoken out as forcefully as you have for the Wall Street protesters.

And I think most Americans expected him to. I think his problem is not only a flat economy – it’s the fact that many independents and many Democrats who gave him a chance have been really disappointed that his prime jobs advisor is the president of GE. I think many of his independent supporters, and even some Republicans who voted for him, are disappointed with his taking of the big checks from oil companies, from chemical companies, from Wall Street banks. I think this is a surprise. He will lose this election to a person who stands up to him on the money.

And the one thing that keeps me going at 1 or 2 percent, quite frankly, is the fact that no one else has this message and I think there’s a whole nation waiting to hear it. I need to get in a debate. There’ve been seven without me. I’m the only candidate with 1 percent or more in the polls that’s not been in a single debate. Ninety-five percent of Americans don’t even know I’m running or who I am. This has been the most frustrating period of my life. But I think corruption has to be fought and I don’t know a better way to do it than to not take their money, and I’m going to stand on that.

It seems like every candidate who’s gotten into the debates so far has had at least one big surge in the polls at some point, and I imagine that gives you hope – that if you can get it, it can happen to you too, and then who knows? So what is the most important thing that Republicans would see if you are included in one that they aren’t now seeing?

A jobs program that starts with fair trade. We’ve actually lost 10 million manufacturing jobs to China and its neighbors, and that will not be mentioned [Tuesday night].

Number two, I think they would hear about money and politics and what I would try to do to reform the system. I’m saying the system is corrupt because congressmen want to get reelected more than anything else. Somebody needs to stand up, and the Republican Party is a great place for it. Theodore Roosevelt said it a hundred years ago. He asked Republicans: Are we going to be the party of privilege and Wall Street or are we going to be the party of small business, plain people and working America? I would like to ask that question in the next debate. There would be a silence so deep you could hear your heart beating.