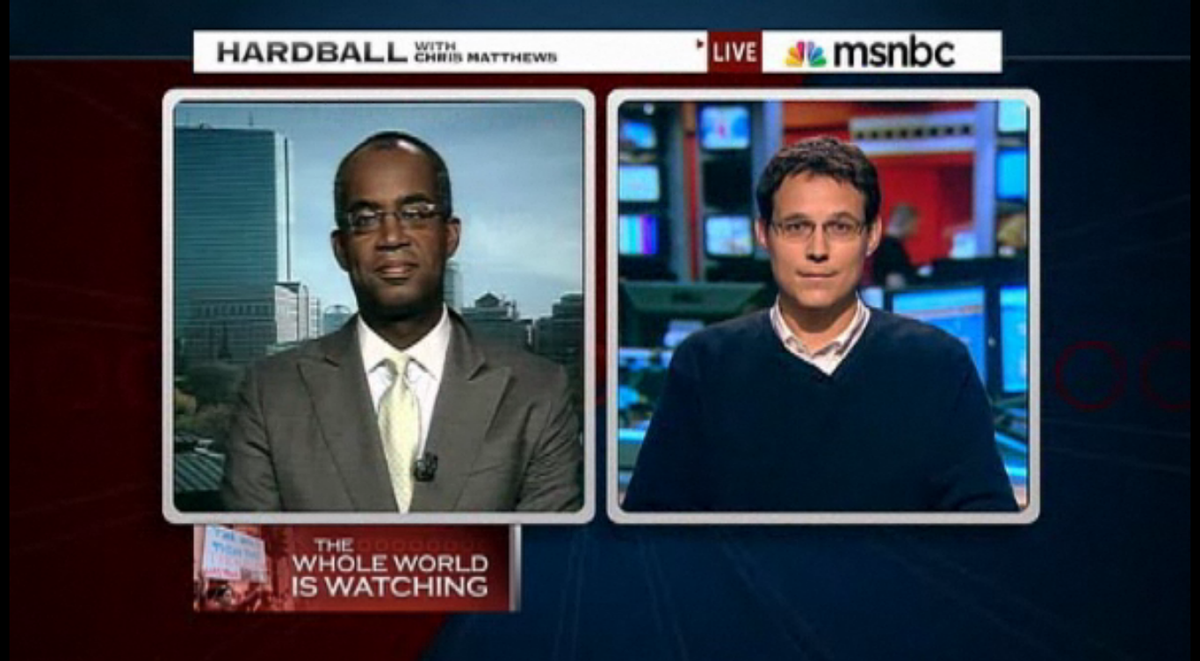 At around 4:15 Monday afternoon, I left my apartment and headed uptown to MSNBC's studios, satisfied that I'd prepared myself adequately for a "Hardball" segment on the politics of Occupy Wall Street. So perhaps you can imagine my surprise when a little over an hour later I found myself fielding a question on live national television about ... public sex and urination.

"Steve, is all that true -- that descriptive account of what's going on?" Chris Matthews asked me. He was referring to the lurid picture that my fellow guest, GOP strategist and former Dick Cheney adviser Ron Christie, had just painted of rampant licentiousness at Zuccotti Park in lower Manhattan, where the Wall Street demonstrators have been camping out for the past few weeks. "College students who are out having sex on the lawn, people who admit they're just there to be part of a good time, people are taking drugs, people who are breaking the law," is how Christie characterized the protesters, later adding that "they don't have a right to urinate on the lawn."

As Matthews noted, that characterization seemed perfectly tailored to hit "all of the erogenous zones of right-wing outrage." Certainly it meshes with what many other commentators and media outlets on the right have been saying. Asked if he had a message for the protesters, Christie said: "I feel your pain, I understand where you’re coming from, but go get a job!" For what it's worth, I tried to point out that the images Christie conjured don't line up with what I've seen. (While I haven't spent a great deal of time at Zuccotti Park, I do live nearby and have stopped by several times to survey the scene.)

Only after the segment was over did it hit me that I should have asked Christie about something in particular. Twice, he specifically used the term "on the lawn" -- in relation to where the protesters are supposedly having sex and where they're urinating. One of these references came after Matthews had asked both of us if we'd been down to the park ourselves. And he specifically asked Christie if he'd "smelled the crowd -- you saw them, you know what you’re talking about visually, right?" Christie replied, "Yes, I do."

The problem: There is no lawn at Zuccotti Park, something that should be abundantly clear to anyone who's been down there. It's really more of a stone pavilion. (You can see a picture here.) Now, it's definitely possible that Christie was just using the term "lawn" to mean "open space." People can be very inexact when they're speaking off the cuff, and I'd ordinarily give him the benefit of the doubt. But given how intent he seemed on conjuring the most nightmarish scene imaginable, I do wonder: Has he really spent any time down there? Or maybe he did, but he just didn't notice the lack of a lawn because he was so distracted by all of the public sex...

Anyway, the whole segment is below. I don't know if I added anything to it, but it's worth watching for Christie's performance if nothing else: