Has the price of Silver gone up?

The new movie version of the classic western will star Johnny Depp as Tonto -- and cost $215 million. Why? 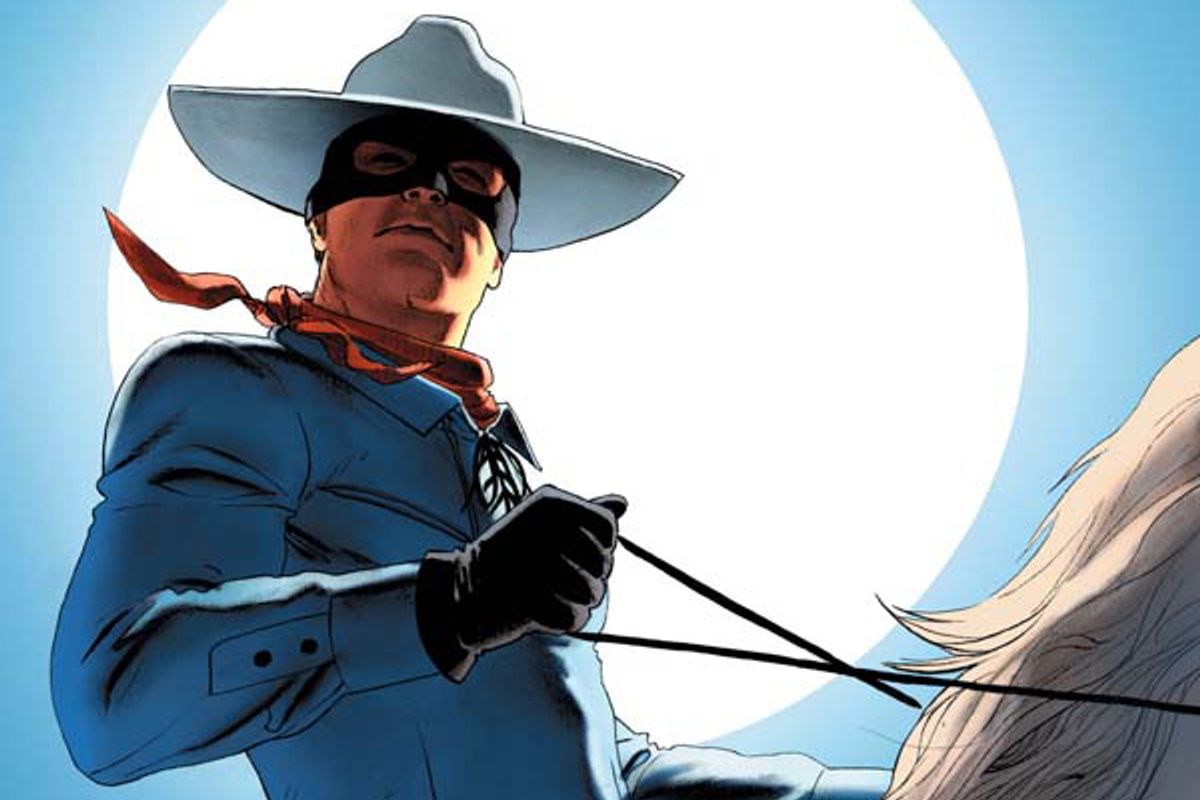 Apparently Disney has given "Rango" and "Pirates of the Caribbean" director Gore Verbinski and his star, Johnny Depp, a greenlight to shoot a new feature film version of "The Lone Ranger," budgeted at $215 million. That might seem an exorbitant price tag for a concept that ran for years on TV in the 1950s, despite Ed Wood-level production values. But it's a reduced price compared to what Verbinski originally envisioned; Disney pulled the plug on the project a couple of months ago because its initial price tag, $250 million, was deemed too high.

Where is the money going, you ask? Well, originally it was going to pay for all the werewolves.

Yes, werewolves.  The Lone Ranger and Tonto were going to fight werewolves.

When Disney spiked the project, citing worries about recouping its massive cost, there was an online outcry about how mind-bogglingly inappropriate it was to add frickin' werewolves to the Lone Ranger myth, Verbinski and Depp agreed to salary cuts and went back to the drawing board, and supposedly the new film won't have any werewolves.

But it will, apparently, have $215 million worth of production values.

My question is: Why?

I haven't read the new script, but I'm having a hard time imagining why "The Lone Ranger" would need to cost $215 million. Are Depp's Tonto and the Masked Man (played by "Social Network" costar Armie Hammer) going to extinguish the great Chicago fire at the end of the movie? Or battle a giant mechanical spider? Or defend Pandora against a military counterattack?

As a boy, I was enthralled by reruns of the 1950s TV version of "The Lone Ranger." It had no production values to speak of. It didn't need them. The show -- like creators George W. Trendle and Fran Striker Jr.'s original radio plays and comics scripts -- weren't deep, but they were tremendously exciting, and their excitement had nothing to do with scope.

They were all about plot, characterization and in-the-moment decisions. They were action-packed morality plays that pivoted on choices. The Ranger and Tonto were the moral rocks that the bad guys dashed themselves against. The heroes and villains were surrounded by supporting characters and bit players who fell somewhere along the good-evil continuum; much of the suspense in the "Lone Ranger" stories came from the sight of people wrestling with whether to do the right thing or succumb to intimidation or greed.

If filmmakers have a firm grasp on all that, they don't need to spend hundreds of millions of dollars envisioning the driving of the golden spike or the battle of Little Big Horn, or a tussle between Godzilla and Megalon in the foothills of South Dakota, or whatever they think they need $215 million for. Especially not when they're making a western, for crying out loud.

Westerns are not about production values. They are about their western-ness, and the filmmakers' ability to satisfy or subvert the genre's familiar images and situations. And that's it.

Mr. Verbinski, if you're reading this, did you ever see "Tombstone"? A hugely entertaining film, with legs; it replays on TV constantly and millions of people own it on DVD. It cost $25 million in 1993; today it would cost $40 million, and it would still be exactly as much fun, even if you didn't spend another dime on it. Go down the list of successful modern westerns, or neo-westerns, and you can see the same production cost-to-dramatic payoff ratio repeating itself. "Dances With Wolves," a visually spectacular and very long movie with a big cast and several stirring action scenes, cost about $22 million back in 1990 -- about $40 million today. "Unforgiven" cost $14 million in 1992, and from the looks of it, most of the money went to pay for a rather small and muddy town set; in 2011 money, that's $23 million. Would "Unforgiven" be a better western, or a better film, period, if it had cost five times as much? What about Joel and Ethan Coen's most financially successful film, their 2010 remake of "True Grit"? It cost $38 million and grossed a staggering $171 million. Do you know anyone who came out of "True Grit" saying, "I would have liked it better if they'd spent more money on it"?

Some films rise or fall based on the quality of their special effects, sets, costumes and so forth. But would anyone think that "The Lone Ranger" would be one of them?  The 1981 feature film version "The Legend of the Lone Ranger" cost as much as that summer's other retro serial, "Raiders of the Lost Ark" -- $18 million, or about $44 million at today's prices. It flopped. Why? Because even though it looked great, it was a tedious, nonsensical film, and untrue to the spirit of the character.

The TV show consisted of little more than footage of the Lone Ranger and Tonto delivering exposition, arguing ethics with other characters, galloping through scrubby ranchland and having fistfights in the same nine sets over and over again, but because it was made with sincerity and energy, viewers loved it. Disney could bankroll a similarly unfussy new movie version of "The Lone Ranger" -- a film with a Coen brothers- or Clint Eastwood-level budget, meaning lean -- and as long as it was well-cast, well-written, imaginatively photographed and edited, true to the spirit of the character, and featured at least one action sequence scored to "The William Tell Overture," it could be a "True Grit" or "Unforgiven"-level hit.  A $215 million "Lone Ranger" movie would have to make over $700 million -- and join the list of the all time biggest box office draws -- to be considered a success. I can't see that happening, even if the film is great. We no longer live in a world in which big-budget westerns make that kind of money, unless they're transposed to another galaxy and titled "Avatar."

And here's the most depressing irony of all: If a hyper-expensive "Lone Ranger" film somehow does become a huge success, it will have everything to do with the appeal of the story, characters and plot, and zero to do with the scope of the production.

But apparently no one involved with the production agrees with that thinking. Story and character are for indie film -- and television. Hollywood's bloated-is-better culture has reached the point where filmmakers and a major studio think that a "Lone Ranger" movie has to be budgeted at roughly half the cost of "Avatar" for it to be considered a worthwhile endeavor. It's a property, a possible franchise, a toy and video game-generating machine -- another thing to be packaged and sold, with or without a personal stamp. It's also a signifier of personal clout, which means if it's not staggeringly expensive, it's not a "real" movie, and thus not worth making.