The tragic, hilarious "We Are the 53 percent" movement 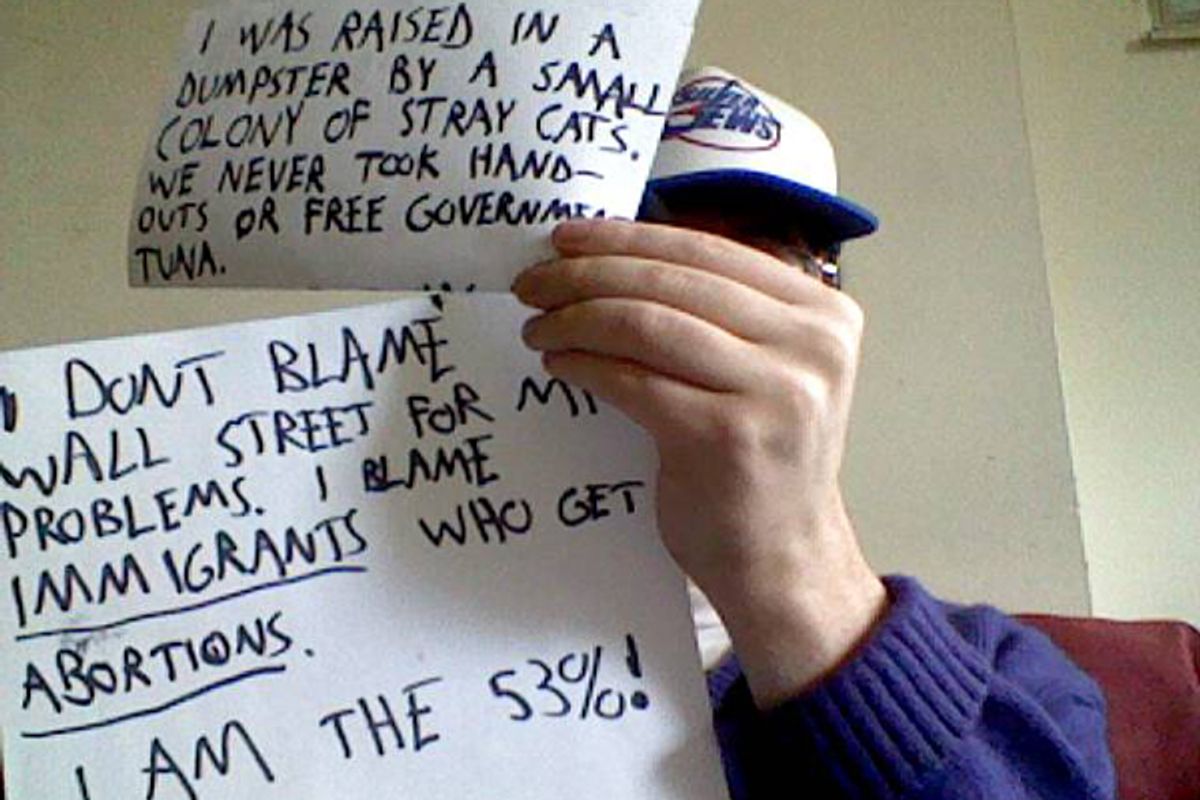 The art with this story is Alex Pareene's parody of Erick Erickson's unintentionally hilarious web site We Are The 53%. It screams out for satire -- so go ahead and give it a try. We'll publish the best ones on Salon. Write a hand-written letter, take a picture and email it to us at 53@salon.com. Or you can publish it yourself on Open Salon -- just tag it "The Real 53 Percent."

The conservative response to the "We are the 99 percent" movement is ... hilarious. (And, sure, heartbreaking.) Conservative filmmaker Mike Wilson and vacuous right-blogger Erick Erickson joined forces to start "We Are the 53%," a blog made up of contributions from the 53 percent of Americans who pay more in federal income taxes than they receive back in deductions or credits.

The project was kicked off by Erick Erickson, who announced that he works "three jobs," by which he means being a professional television pundit, radio pundit and Internet pundit. There is a stunning amount of cognitive dissonance, misplaced resentment and class revulsion going on, even for a conservative Web project.

The site can't even manage to correctly represent that 53 percent, with multiple contributors very clearly belonging to the 47 percent of people who make up the supposed parasite class. There is a blog dedicated to this confused minority. The best example is obviously this dog.

Let's get this out of the way early: Pretty much every adult American pays taxes. Workers who are too poor to pay federal income taxes still pay payroll taxes, and property taxes if they own their home. Even the unemployed pay sales taxes. The poorest Americans -- people who make an average of $12,500 a year -- pay, on average, 16 percent of their paltry income in taxes. That is less than every other demographic, but the point of a progressive tax system is that 16 percent of a poor person's income is a hell of a lot more meaningful to that person than 30 percent of a millionaire's. It's a simple concept, and one that most Americans agree with. And that simplicity and popularity is why the conservative movement has spent 100 years attempting to muddy the debate with misinformation. (They are quite dedicated, actually, to class warfare, in that they seek to align the shrinking middle with the elites in a war against the downtrodden.)

So a good number of people who pay no federal income taxes are simply lucky enough to be impoverished. The rest are beneficiaries of tax breaks and loopholes championed most vocally by Republicans. A member of "the 1 percent" (or, more accurately, the tenth-of-1 percent) likely considers these harried taxpayers "the 53 percent of people without the sense to hire a good accountant."

Here's my Tumblr idea, for Americans resentful of the free rides they imagine others are getting as they work themselves to the bone: "We are the 94 percent of people who claim never to have received government benefits who have actually directly benefited from government social programs."