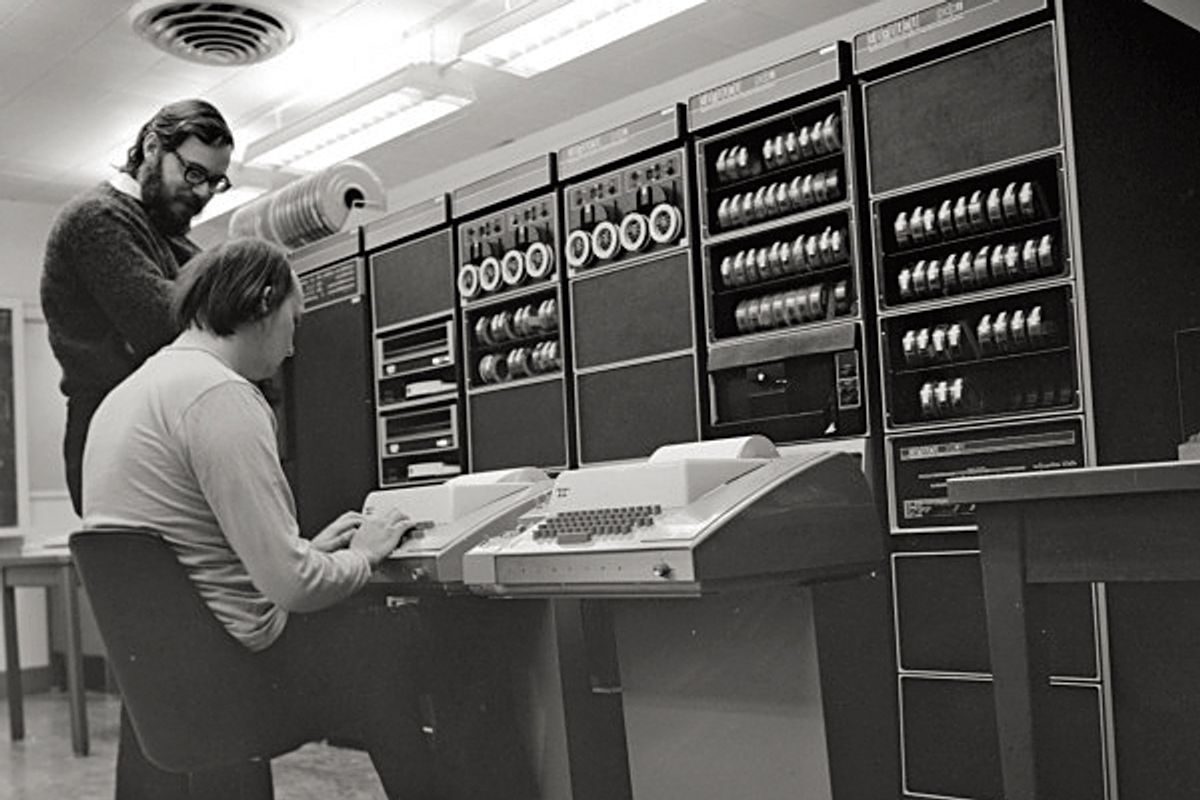 Dennis Ritchie created no gadgets to entrance the lustful desire of hundreds of millions of well-heeled consumers, built no companies that bestride the corporate world like Colossus, and made no billions from his revolutionary contributions to the world of computer science. I would venture to guess that less than one-hundredth of 1 percent of the number of people who took shocked notice of the passing of Steve Jobs would even recognize his name. Time magazine will not rip apart its next issue to put the news of his death earlier this week, at age 70, on the cover.

But the co-creator (with Ken Thompson) of the Unix operating system and author of the C programming language deserves more than just a moment of silence from programmers everywhere. The modern digital world is built out of the tools that he created, and their descendents. A lifetime employee of Bell Labs and its various corporate spawn, Ritchie was a geek Prometheus. His gift of fire was code that worked on all kinds of different machines and made possible the interconnection of, well, everything. Unix and C are embedded in the deep structure of the Internet and the entire networked computer domain. The world owes Ritchie an awful lot.

"Everything we've got," wrote Paul Adams at Popular Science, "Internet servers, telephone backbones, the microprocessor in the keyboard I'm using to type this -- emanates from Ritchie's work."

Moments ago, I pulled out a copy of Peter H. Salus' "A Quarter Century of Unix" and scanned it to see if it would jog any memories of revealing anecdotes about Ritchie. My attention was caught by a picture dated 1986. Bearded, his hair thinning at top, Ritchie is sporting horn-rimmed glasses and a fantastic, jovial grin. He's also wearing a T-shirt bearing the image of a vaguely Princess Leia lookalike peering out from under the classic symbol for "no" -- a circle with a slash through it.

From the picture alone, it's impossible to parse the T-shirt's code. Maybe there's a snappy one-liner beneath the image or on the back of Ritchie's shirt that explains all. But I didn't need it. The entire presentation simply screamed out Deep Geek -- proclaiming gleeful membership in a Chinese-food-eating hacker tribe that delights in awful puns and ironic juxtaposition, that sees the world a little bit off-kilter from the rest of us iPhone-twiddling drones, from all the billions of  inhabitants of the networked world that people like him made possible. I don't know what the shirt means, but on Dennis Ritchie's 55-year-old chest, it looks iconic. Let's put it this way, if the characters in the sit-com "Big Bang Theory" had to bid against each other on eBay to buy that shirt, the price would be in the hundreds of thousands of dollars within minutes. And why not -- geeks like Ritchie built the Internet!

And they did it, not because they wanted money, or even necessarily to foist something "insanely great" on the general public. They did it because that's what they were interested in, because it in some way improved their own lives and they wanted to share the results.

There's a great quote from Ritchie at the end of "A Quarter-Century of Unix" that captures the essence of his contribution perfectly:

Some people have the impression that the original Unix work was a bootleg project, a "skunk works." This is not so. Research workers are supposed to discover or invent new things... We always had management encouragement... Our intent was to create a pleasant computing environment for ourselves and our hope was that others liked it.

The greatest danger to good computer science research today may be excessive relevance... Another danger is that commercial pressure of one sort or another will divert the attention of the best thinkers from real innovation to exploitation of the current fad, from prospecting to mining a known lode.

If we can keep alive enough openness to new ideas, enough freedom of communication, enough patience to allow the novel to prosper, it will remain possible for a future Ken Thompson to find a little-used CRAY/1 computer and fashion a system as creative, and as influential, as Unix.

What a wonderful credo! Death to excessive relevance! Geekier words were never spoken!