Globalization hammered the Midwest. So why did Michigan Democrats support the South Korean FTA? 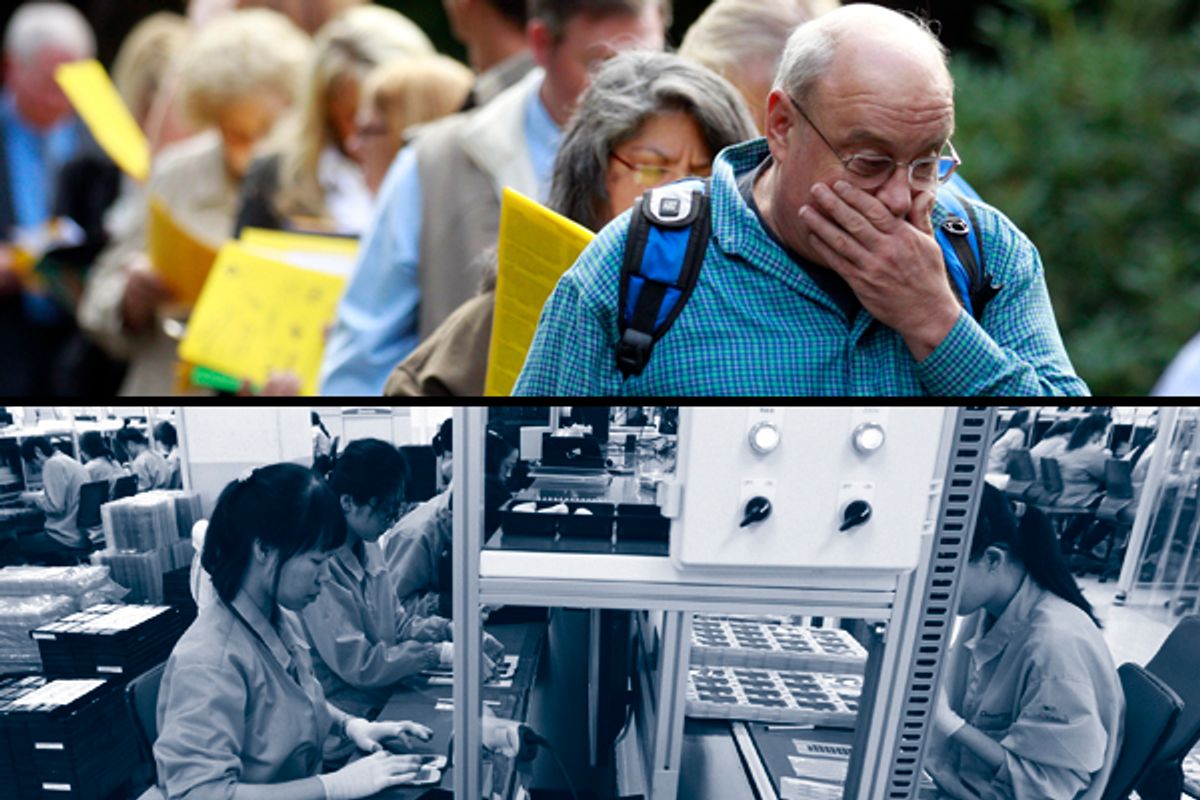 Employees of Pantech work at an assembly line in Gimpo, northwest of Seoul, April 28, 2011. Top: Jay Kober, 60, of Portland, who has been unemployed for 10 months, waits in line with others during the 2011 Maximum Connections Job and Career Fair in Portland, Ore. (Reuters/AP)
--

After five years of squabbling, the U.S. Senate and House of Representatives  finally passed free trade agreements with South Korea, Colombia and Panama on Wednesday. The Hill described the news as a "win" for President Obama. At first glance, the terminology seems a bit odd. The free trade agreements were originally negotiated by President George Bush, have been a high priority for Republicans ever since, and are considered extremely suspect by many Democrats, particularly in Rust Belt swing states that are crucial to Obama's reelection. While the trade agreements will probably boost exports (and jobs in export-related sectors) they will also result in job losses in other sectors. The net result is unlikely to make a significant impact in the overall economic situation anytime soon; certainly not in the short-term time frame necessary to qualify as a "win" for the embattled Obama.

What's more, in 2008, Obama campaigned in Ohio and Michigan against free trade agreements like NAFTA, for blatantly political reasons. But now it's a victory for him to get the biggest free trade deal since NAFTA -- the South Korean FTA -- through Congress? It doesn't add up.

Even curiouser is the sight of both Democratic Michigan senators supporting the South Korean FTA. If Michigan is the American state hit hardest by globalization over the past couple of decades, why would any Democrat politician there cheerlead for even more free trade?

The answer to that can be found in changes in the FTA negotiated by the Obama administration that specifically relate to the auto industry. U.S. and European automakers have long argued that South Korea imposes a confusing, unique and ever-changing set of automobile safety and environmental standards that collectively impose formidable non-tariff barriers to foreign car imports. The new deal, hammered out last December, exempts U.S. cars from those standards.

Consider, for a moment, the irony at work here. One criticism often leveled against free trade agreement is that they funnel manufacturing investment to countries with weaker environmental regulations than the U.S. But here we have a case where the U.S. is declaring victory after persuading South Korea to exempt U.S. auto imports from greenhouse gas emissions limits that exceed what the U.S. requires. That's a little embarrassing.

On the other hand, at least insofar as safety standards are concerned, there does seem to be a fair amount of evidence that South Korea's regulations are purposefully designed to keep foreign competition at bay. In testimony to the House Ways and Means Commission in 2007, Stephen J. Collins, president of the Automotive Trade Policy Council, described a bewildering regulatory environment in which specifications for "tinted windshields, frequencies for remote keyless entry systems, bumper configurations, power window requirements, and license plate sizes" changed from year to year. For foreign importers, the cost of complying with such regulations could cost millions of dollars per car model.

"Just last week," reported Collins, "we were notified of a change in the auto insurance policies that arbitrarily placed imported vehicles  in the highest risk classification. The result is owners of imported vehicles will pay the highest premium possible for their auto insurance, (both Ford and DaimlerChrysler were placed in Class #1, the most expensive), as well as a totally unacceptable process foreign companies must use to certify compliance with these regulations."

Whatever one thinks of Korea's regulatory environment, the deal cut by Obama's negotiators assuaged the U.S. auto industry's concerns about the FTA, thus explaining the support from Michigan Democrats. But whether the changes will  boost car imports significantly is still highly open to question. A study conducted by U.S. International Trade Council concluded that Korea's carmakers would end up benefiting more from the deal in the long run than Detroit's Big 3.

It's just not clear that American car companies make what South Koreans want to drive. For example, one of the non-tariff barriers that most irritated American car manufacturers was a tax on engine size. The bigger the engine, the bigger the tax. This effectively discriminated against American automakers who have historically specialized in building bigger, more powerful, cars. The new agreement exempts U.S. autos from that tax.

But anyone who has ever been to South Korea -- or any other East Asian nation -- understands immediately that, engine tax or no engine tax, big American cars just don't make sense in crowded Asian cities where the cost of a gallon of gas is several dollars higher than in the U.S. And there is nothing that a free trade agreement can do to change that basic truth.

So there's your big win for Obama: a legislative victory that upsets big swaths of his own party, won't materially improve the fortunes of the domestic auto industry, and is unlikely to make a significant difference in states that are critical to his election.