How could it not be good news that he's leading all of his would-be GOP foes in this gruesome economy? 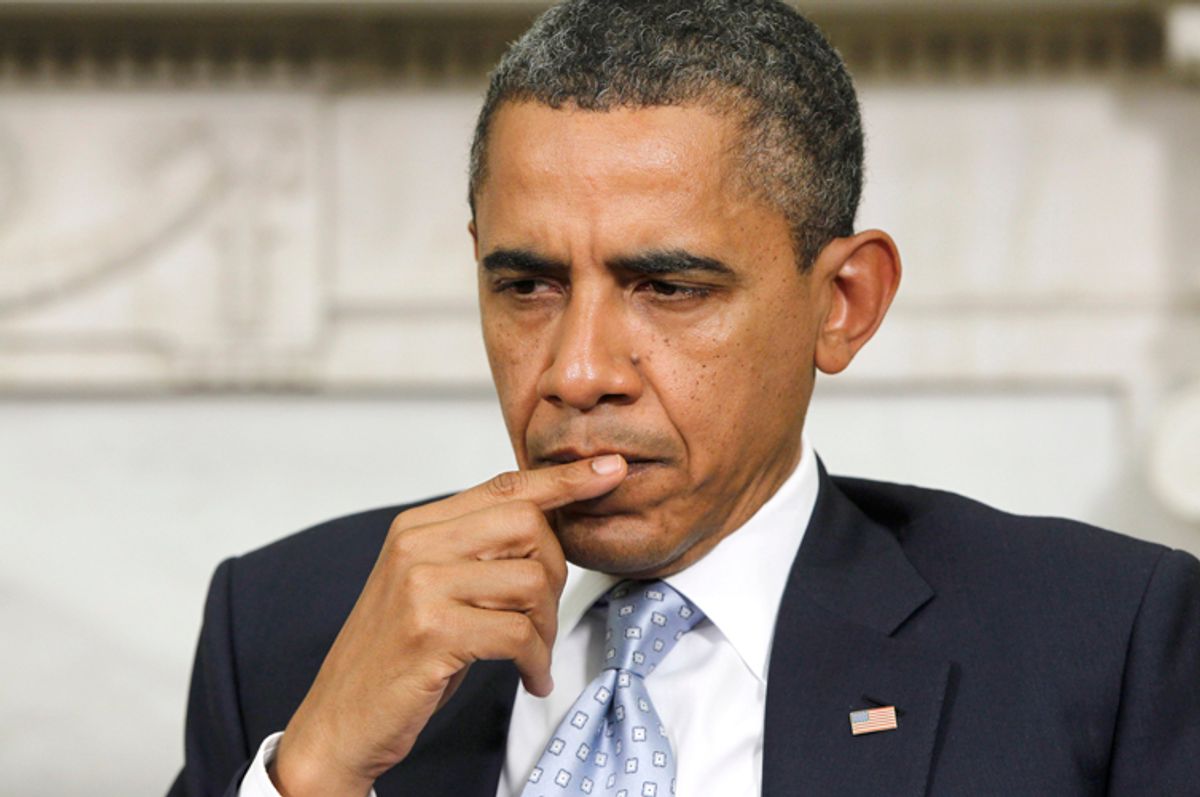 The latest poll from NBC News and the Wall Street Journal finds that 74 percent of voters think the country is on the wrong track, that 51 percent disapprove of the way President Obama is doing his job, and that 57 percent don't like the way he's handling the economy. These are, obviously, the kinds of numbers can kill a reelection campaign, and yet the survey also finds that Obama leads his most likely GOP foe, Mitt Romney, 46 to 44 percent. He also runs 12 points ahead of Rick Perry (51-39 percent) and 11 ahead of Herman Cain (49-38). This isn't an outlier, either: Numerous recent polls have documented the same phenomenon. It led Andrew Sullivan, writing in response to the new NBC/WSJ data, to argue:

[W]hat does it say about a party that its most competitive nominee is basically tied with the president, while unemployment remains over 9 percent? It says it's much weaker right now than it wants you to believe.

Sullivan is hardly the only observer to make note of this seemingly contradictory trend, and to suggest that it's a sign of GOP brand poisoning. After all, the Republican Party's image has taken a beating in 2011. A poll conducted just after the debt ceiling ordeal this summer gave the party its lowest favorable mark since Bill Clinton's impeachment. And the Tea Party, which is closely linked to the GOP, has been racking up poisonous poll numbers for months now. So it does seem logical to suggest that all of these negative associations are manifesting themselves in voters' apparent reluctance to say they'll support the GOP candidate next year, even if they are inclined to toss Obama out.

But that probably isn't what we're seeing in these polls -- at least not yet. A good reference point here is the late winter and spring and 1992, when the country was facing a (much milder) economic downturn and President George H.W. Bush's poll numbers sagged to where Obama's are now. A poll at the end of March that year found that 72 percent of voters believed the country was going in the wrong direction, nearly identical to the current level, with Bush registering roughly the same approval rating that Obama now has. And yet, the same poll put Bush ahead of his most likely Democratic opponent, Bill Clinton by two points, 48 to 46 percent. It also put him 13 points ahead of Jerry Brown, Clinton's last active Democratic foe, and 3 points in front of Paul Tsongas, who had suspended his campaign in mid-March but was threatening to re-enter. Another poll around the same time had Bush up by 9 on Clinton, and 20 on Brown.

Granted, there were some surveys in early '92 that actually put Clinton ahead of Bush, just as the occasional survey now gives Romney the edge over Obama. But like Obama now, Bush generally led in head-to-head match-ups, despite his own worrisome vital signs. It wasn't until the Democratic convention in July that Clinton moved firmly into the lead, a position he didn't relinquish for the rest of the campaign. Clinton's story shows how deceptive early general election trial heats can be. The conventional wisdom in the spring of '92 was that his "character problem" would cost him the election, despite Bush's own woes. But as more voters began to pay attention, those concerns vanished and the race turned into a referendum on Bush's handling of a sour economy. By the end of the campaign, Clinton was regarded as perhaps his generation's most talented political communicator.

The point here is not that the same thing will happen with Romney if he does win the GOP nomination. It may well turn out that the GOP's image problems linger (and maybe even get worse) and that the taint prevents a critical chunk of swing voters from pulling the lever for Romney. This is pretty much what the White House is counting on happening, and I'm open to the possibility that it will. But a poll right now, more than a year before the election, that puts Obama's most likely GOP foes 2 points behind him is hardly proof that it's happening now. Romney is actually right about where a challenger should be at this point.