The imaginary perils of flying

Is the chatter between pilots and air traffic control a great way to kill time -- or too easy to misinterpret? 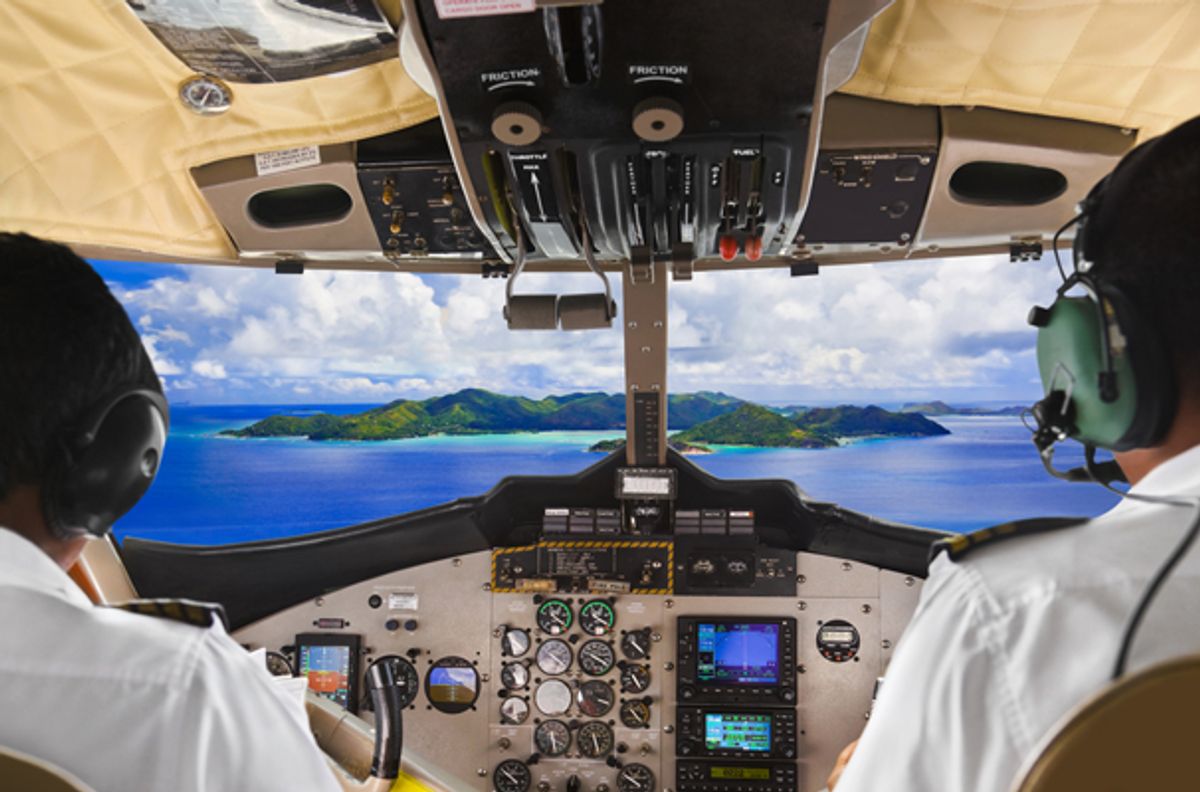 Sometimes, while the plane is accelerating for takeoff, there's a repetitive, rhythmic thumping from below: bang-bang-bang-bang, all the way down the runway, like we're hitting a string of potholes. A friend tells me this is an indication of flat spots on the plane's tire, or a tire that isn't inflated properly.

Another good reason to ignore advice from your friends. What you're hearing is the plane's forward landing gear -- its nose tires -- hitting the recessed lights along the runway centerline. These centerline lights are inlaid flush with the pavement, but they're not that  flush and almost always you can feel them. One technique is to track a few feet off-center. The takeoff roll is seldom perfectly straight, however -- especially during strong crosswinds -- and so the bumps might start and stop, start and stop.

Why is engine power cut back shortly after taking off? Takeoff is the scariest part of flying to me, and suddenly, only seconds after leaving the ground, it feels like the plane is falling.

Planes routinely use more thrust than is necessary to take off, and the output of the engines is routinely drawn back to what we call "climb thrust" or "climb power" after reaching a thousand feet or so. This saves wear and tear on the engines, reduces noise on the ground, and keeps the jet from overspeeding (there are speed limits, yes, varying with altitude and/or the departure procedure being flown). The sounds and sensations of this cutback are sometimes quite noticeable, but trust me, the plane is not descending, or even decelerating. It's simply not climbing as sharply, and the rate of acceleration is reduced.

What do you think of this great idea: The plane should have a video camera aimed through the cockpit windshield, with the view wired into the seatback video screens, letting passengers see what the pilot sees.

What I think is that this already exists. Many airlines -- alas, all of them outside the United States -- display one or more camera views on the seatback screens. Often there are multiple angles, and passengers can click between them. There are cameras showing what the pilots see, others that point straight down, and sometimes one aiming backward, off the tail, providing an unusual, some would say harrowing, view of the ground falling away during takeoff. It depends on the aircraft and airline. You'll typically find this on the A330, A340, A380 and 777.

For a while in the 1970s, American Airlines had a camera mounted on the aft cockpit wall of its DC-10s. The view was projected onto the bulkhead movie screen and passengers could watch the pilots doing their thing during takeoff and landing.

I'm a big fan of United's so-called Channel Nine, which allows you to listen in on the chatter between pilots and air traffic control. Often, however, the feature is unavailable. I'm told it is up to the captain whether to switch it on. What I don't understand is why any captain would choose not to.

Channel Nine is beloved of many, and there were questions as to whether the feature would survive United's merger with Continental. I'm happy to report it will remain, and Continental's aircraft are to be wired up accordingly.

However, not all pilots are fond of the idea of passengers eavesdropping. Why? Because of the unfriendly letters people send, the litigation they threaten, and the angry comments they make, when it's perceived the pilots have committed some "mistake." Also, as I noted in a past discussion of this same topic, passengers not familiar with the vernacular may misinterpret a transmission and assume nonexistent troubles: Let's say a controller asks, "United 537, um, do you think you can make it?" This is a common query pertaining to whether a plane can hit a specific altitude or fix at a specific time or speed. Depending on the controller's intonation -- or the pilot's reply, "No, we can't make it" -- such innocuous exchanges might have a passenger bursting into tears and picturing his wife and children.

I personally think Channel Nine is pretty cool -- it's low-cost entertainment and a useful, dare I say instructional, way for passengers to kill time -- and I feel that a few of my colleagues are being needlessly cautious and a touch paranoid. I know one captain who refuses even to allow his name to be said over the public address system as part of the welcome aboard announcement made by the flight attendants.

A couple of weeks ago we landed in Seattle. It was a clear, calm day, around 5 in the afternoon. Our approach to runway 16C was tediously uneventful and the touchdown perfectly smooth. It had been the captain's landing, and as the passengers disembarked he stood near the exit deservedly taking his bows. A young woman about 25 stopped on her way out and suddenly exclaimed: "Oh my gawd!" she said. "That was, like the scariest landing I have ever experienced." She looked and sounded legitimately spooked.

Before we could ask what on earth she was talking about, she stepped into the Jetway and was gone. We looked at each other and shrugged. Her friends and family, I have a feeling, would later be treated to a colorful account of a perilous, hair-raising arrival into Sea-Tac that in fact was as placid as it gets.

Things like this happen all the time. I've been asked pointedly about near-misses that never happened, about "severe turbulence" and "wind shear" that never were, flat tires that weren't flat, and so on. I know pilots who have been accused of cutting back oxygen, shutting off engines, dumping fuel and other imaginary horrors. Part of this, I suppose, comes from the contempt and distrust people feel toward airlines generally. And although millions of people fly, few of them really understand it. Almost everybody is on some level afraid of it, and good explanations are hard to come by. Thus, while these sorts of misinterpretations are frustrating for people like me, maybe they shouldn't be shocking.