The politics behind Israel's prisoner swap 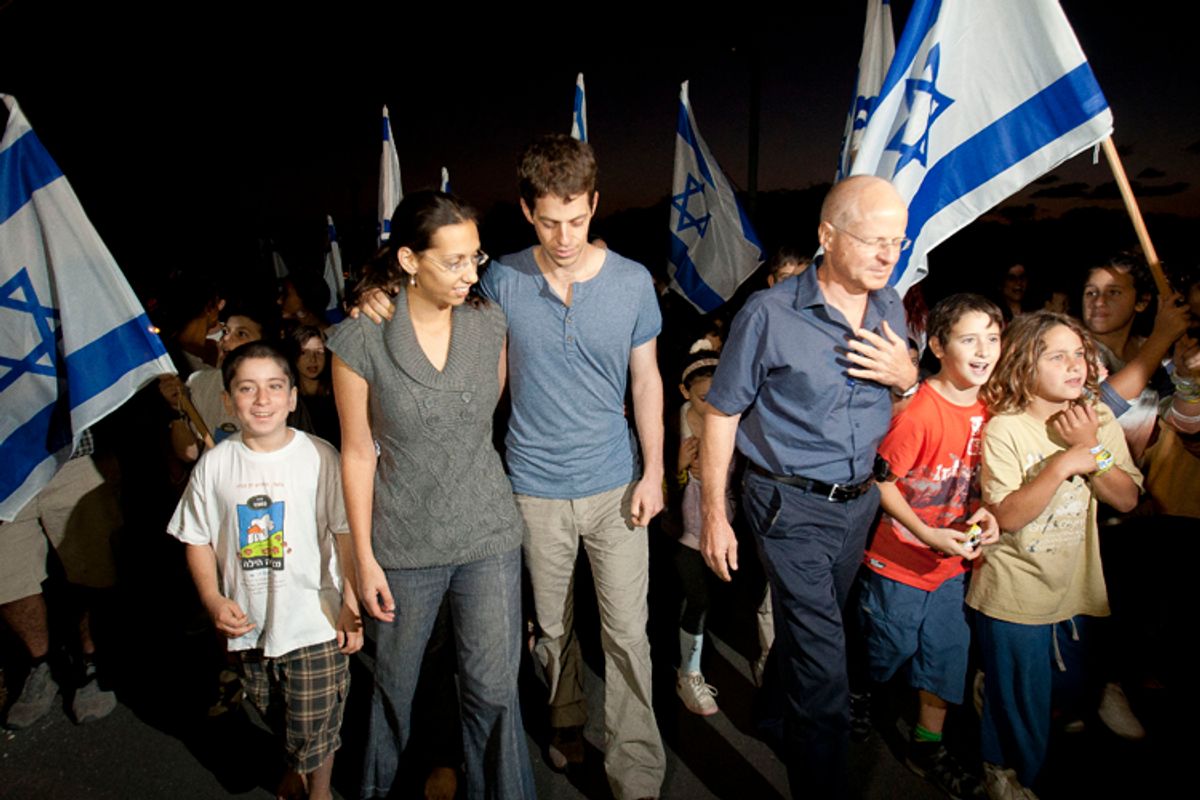 JERUSALEM, Israel --Mitzpeh Hila is a village of just over 525 residents.

Located on a bucolic, breezy hilltop in the Western Galilee, it offers hitchhikers and weekend visitors breathtaking vistas of the Hula Valley, in Israel, and of the southern Lebanese countryside.

Its principal source of income is tourism, especially that of the bed and breakfasts operated by individual families. Weekend after weekend they attract urban dwellers thirsty for a weekend of birdsong, green hills and organic brunches.

In 1988, when their middle child, Gilad, was two years old, Noam and Aviva Shalit moved to this remote outpost like many others who sought a clean, quiet life in tune with nature. They own and run one of these small hostelries.

Gilad, a scholarly boy who graduated high school with honors, was always a little sickly. His medical profile was sufficiently low to enable him to opt out of combat service in the army, but he chose to volunteer and follow his older brother, Yoel, into the armored corps.

A good kid. When he came home for weekends, he loved to scarf down huge hunks of his neighbor's coffee cake, and she loved to indulge him, making his favorite pastry every Friday afternoon.

At the age of 19, Gilad Shalit was serving on Israel's border with Gaza, at the furthermost point from home within Israel's borders. At the end of one of the weekends in which he'd remained on duty, he was captured by Hamas militants who staged a brazen cross-border incursion into Israeli territory. Two of his companions were killed by the rockets used to blow open their tank. It was early on Sunday morning, 25 June 2006.

Since that moment 1936 days ago, his fate has been unclear. No one outside of his captors has seen him.

Hamas, the extremist faction ruling the Gaza strip, has been cagey at best about the conditions of his confinement.

Rumors have it that he has been held in a two-room basement guarded by two men, surrounded by mines. During this time, he has been allowed three letters home and one DVD, proving he was alive if frail in 2009, which was turned over to Israel in exchange for the release of 20 female Palestinian prisoners.

Two days ago, when the Israeli government and Hamas announced his imminent release, the news was received with a volatile combination of ecstasy and cynicism. Elated Palestinians have taken to the streets in Gaza in anticipation of the release of over 1,000 prisoners.

Peres will apparently formally sign the amnesties for the initial batch of prisoners on Friday. Following that, victims of terror perpetrated by some of those to be released have 48 hours in which they can file Supreme Court petitions to keep them in prison.

Any such appeals are unlikely to alter the amnesty list, however. The court has never overruled such a decision by a sitting government.

But few are oblivious to the political reality shaping the moment: support for Hamas has been steadily eroding on recent months, especially as Gazans continue to suffer ever more restrictions on their personal freedoms, imposed both by the Israeli and Egyptian closure on the territory and by the Islamic rules imposed by Hamas.

Meanwhile, Palestinian president Mahmoud Abbas, leader of the rival Fatah faction, has been enjoying an extraordinary wave of international support following his request for the recognition of Palestine's sovereignty at the UN General Assembly last month.

A convergence of political interests brought about the current deal. With political and social instability roiling Egypt and its sponsors in Iran and Syrian facing uncertain futures, Hamas chose this moment to compromise on key demands it had presented to Israel in exchange for Shalit's release. Among other Hamas demands that have now been dropped was the release of marquee prisoners associated with both Hamas and Fatah.

The Egyptian negotiators who managed to seal the accord have proven that Egypt's ruling military junta remains a player on the regional scene, even if their control over domestic affairs is increasingly in doubt. German and Turkish negotiators have repeatedly failed to bring about results over the past five years.

Israeli Prime Minister Benjamin Netanyahu hopes to appear competent and heroic in bringing the captive soldier home after a miserable six months in which he has fumbled and bumbled his way through a thicket of diplomatic and domestic tests, endangering his own coalition.

In a further sign of political instability, both his foreign minister, Avigdor Lieberman, and his deputy prime minster, former chief of staff Moshe Ya'alon, are both expected to mount right-wing campaigns against him in upcoming elections.

Ministers from Israel's right-wing religious party Shas, who eventually supported the pact, which is approved by a huge majority of the Israeli public, said that Jewish terrorists who attacked Palestinians should be released as part of the deal, in order to provide "balance."

This suggestion has been received with undisguised dismay by observers of Israel's increasingly frayed social fabric. Small but telling incidents of Jewish terror have set the human-rights community on edge. Two weeks ago, an 18-year-old ultra-orthodox Jew set a Galilee mosque on fire, damaging the building and burning holy books.

The final cabinet decision seems to have been influenced by Israeli Security Services director Yoram Cohen, who flew to Cairo twice in recent days to compact the final agreement on Shalit's release.

If all goes according to plan, the now 25-year-old Shalit will be transported to Egypt some time during the coming week, after Israel releases the first batch of some 250 prisoners. After undergoing an initial medical assessment in Cairo, he is expected to board a private plane and fly home.

"We know we won't be getting the same kid we sent back," his mother, Aviva, said Wednesday, after smiling in public for the first time since her son's capture. "But we're waiting for him, and we know we'll manage."