Who will take the OWS Critics Challenge?

A chance for Rove, Newt and all of the others to show us the public sex and rampant anti-Semitism we're missing 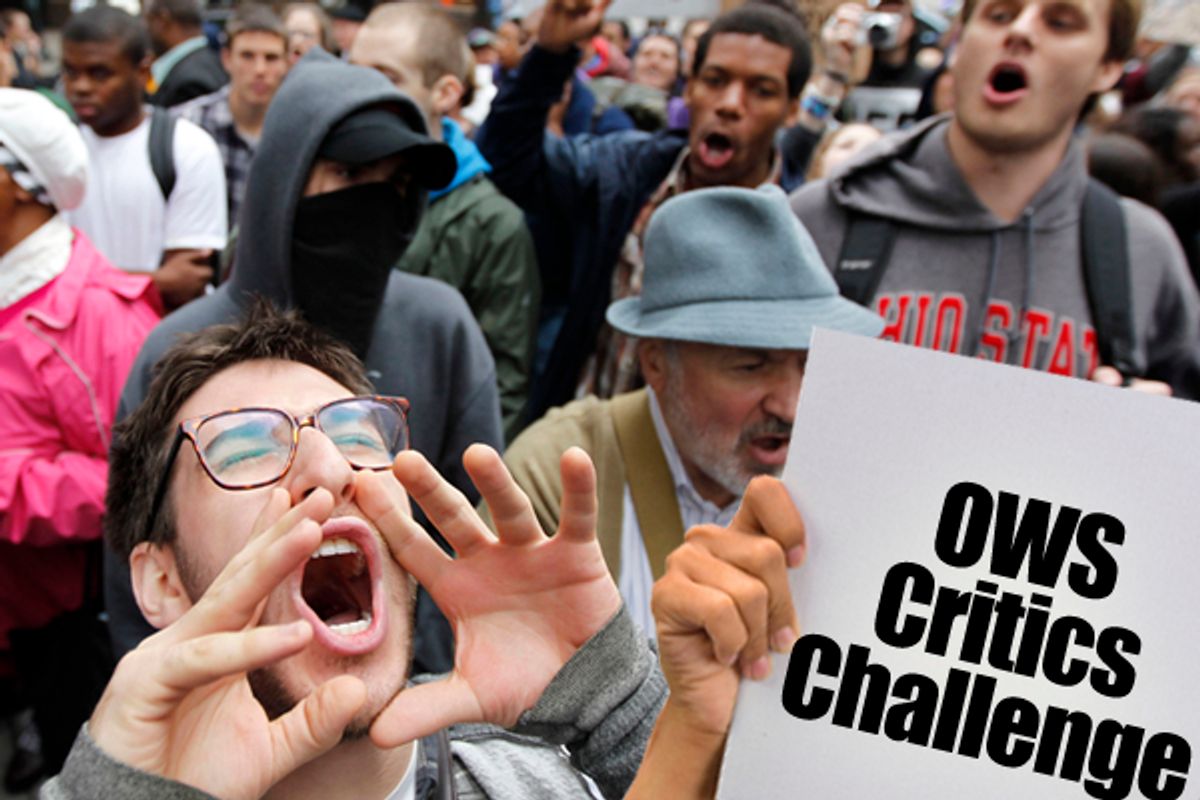 People who marched from a City Hall encampment protest outside a Wells Fargo bank Wednesday, Oct. 12, 2011, in Philadelphia. (AP/Salon)
--

This description has been provided by one conservative leader and commentator after another in the past few days. Their accounts have been so vivid, and have seemed so perfectly tailored to stir a backlash from Middle America, that it's made me wonder: Have any of them actually been to Zuccotti Park?

This first hit me on Monday afternoon, when I did a "Hardball" segment with Ron Christie, a Republican strategist and former Cheney aide. Christie, who appeared via satellite from Boston, vilified the protesters as "college students who are out having sex on the lawn, people who admit they’re just there to be part of a good time, people are taking drugs, people who are breaking the law." He also charged them with "urinating on the lawn." I am still kicking myself for not thinking of this until after the segment, but there is no lawn at Zuccotti Park. It's a small stone pavilion crammed between two towering buildings. If Christie had inspected the scene himself, and he assured Chris Matthews that he had, he surely would have noticed this.

Others who are sounding the alarm aren't even pretending to have first-hand knowledge. Here's Karl Rove:

Occupy Wall Street isn't a movement. It's a series of events populated by a weird cast of disaffected characters, ranging from anarchists and anti-Semites to socialists and LaRouchies.

At this week's GOP debate, Newt Gingrich characterized the scene this way:

I think the people who are protesting in Wall Street break into two groups: one is left-wing agitators who would be happy to show up next week on any other topic, and the other is sincere middle-class people who frankly are very close to the Tea Party people who care. And actually...you can tell which are which. The people who are decent, responsible citizens pick up after themselves. The people who are just out there as activists trash the place and walk off and are proud of having trashed it, so let’s draw that distinction.

At least Newt is allowing for the possibility that not all of the protesters are having sex and littering. On his radio show, Rush Limbaugh has been relentless, flogging the protesters for, among other things "rolling cigarettes, they're smoking tobacco, including other things" and "are destroying restrooms in nearby fast food joints and other establishments." And now Bill Kristol is claiming there's rampant, uncontested anti-Semitism at Zuccotti:

Here's the thing: I live a few blocks from Zuccotti Park. I'll admit, I haven't spent a ton of time there. But I have walked over a few times to survey the scene. And what I've seen is ... a diverse crowd that's sort of hard to pigeonhole. I've seen plenty of dreadlocks and piercings and signs with out-there messages. But I've also seen plenty of perfectly well-behaved, Middle American types who clearly do not share Newt's ideology.  I've seen protesters talking and laughing with police officers. And I haven't seen any public sex or public urination either! (Also, my colleague Justin Elliott, who has spent a lot of time there, did notice some anti-Semitic folks -- and he also noticed that the rest of the crowd turned on them.) But maybe I haven't been looking hard enough. Like I said, I haven't been camped out there, so who knows what I'm missing?

Which leads me to the point of this: I'm pleased to announce the launch of Salon's OWS Critics Challenge. Consider this an open invitation to Karl Rove, Newt Gingrich, Ron Christie, Bill Kristol and any other politicians or pundits who have railed against all of the supposed licentiousness and law-breaking taking place in Zuccotti Park without actually paying a visit: Pick a day, come on down to the neighborhood, and be my guest. I'll treat you to a cup of coffee or a quick meal (what better way to support the local merchants who are supposedly being crushed by the protests?) and then we'll walk over to Zuccotti Park together, visit with the protesters, and compare notes.  It's your chance to show me what I'm missing.

The offer stands for as long as the protests last (which may not be much longer -- so hurry!).