It\'s 2011. The fact that Mitt Romney is a Mormon shouldn\'t be up for discussion 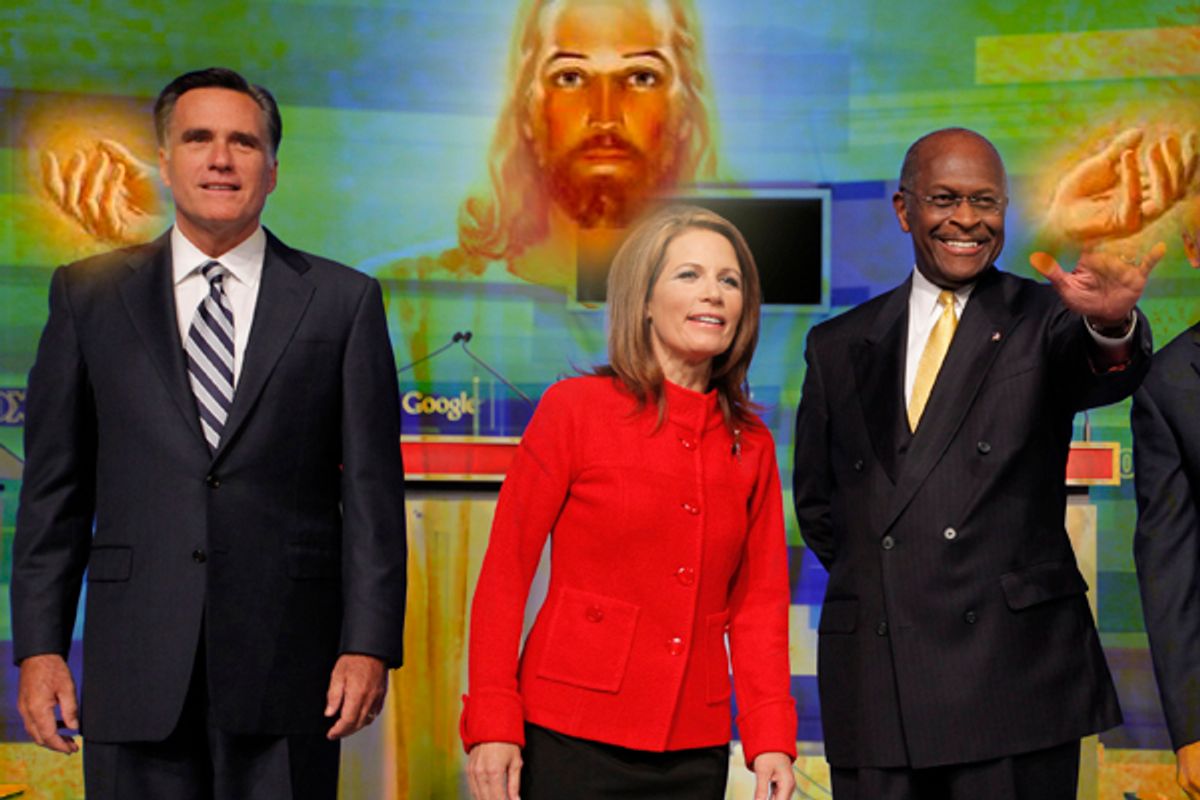 As an atheist and a liberal, I've found it tempting to simply laugh at Republicans fighting each other over the issue of whether or not Mitt Romney, a Mormon, gets to consider himself a Christian. From the nonbeliever point of view, it's like watching a bunch of grown adults work themselves into a frenzy over the differences between leprechauns and fairies. But watching the debate unfold, I've become concerned about what it means to make someone's religious beliefs such a big campaign issue, because it's indicative of a larger eroding of the separation of church and state, which concerns not just atheists but all people who understand the importance of maintaining a secular government.

Robert Jeffress, the influential senior pastor of the First Baptist Church of Dallas, went on "Focal Point" with Bryan Fischer and declared that one shouldn't support Mitt Romney for president because Romney, a Mormon, isn't a real Christian. This created a media dustup that was silly even by the usual standards of ever-sillier mainstream media campaign coverage. John King of CNN interviewed Jeffress, focusing strictly on the question of who Jeffress believes deserves to be called a Christian, and how firmly he believes that only people he calls Christians should hold public office. Candy Crowley of CNN dogged both Herman Cain and Michele Bachmann on the question of whether they believe Romney is a Christian, and then she got irate with the candidates when they refused to answer the question, claiming that it's irrelevant.

These interviews are remarkable for what the CNN anchors didn't discuss, which was the most important question of all: the separation of church and state. Even though our nation has a tradition of pastors staying out of partisan politics -- in fact, it is illegal for ministers to endorse candidates from the pulpit -- it seemingly never occurred to King to challenge Jeffress for overstepping his bounds by telling people that God wants an evangelical Christian who is a Republican for president. By making the story about whether or not Mormons are Christians, CNN left the viewer with the impression that only Christians deserve to hold public office, and that the only thing left to debate is whether someone "counts" as a Christian, making him or her eligible for office.

We're a long way from the days when John Kennedy assured the public that he respected the separation of church and state and would keep his faith separate from his policy-making decisions. Now, even mainstream reporters take it as a given that politicians will let religion govern their actions, and the only thing left to debate on theology is how many angels any single politician believes dance on the head of a pin. Things that used to be considered beyond the pale in politics, such as religious intolerance or ministers blatantly claiming they know who God supports in an election, have become normalized to the point where someone like Mitt Romney, who is odious in most respects but has never really made much fuss over his faith, is seeing religious tests becoming a major issue in his campaign.

The ramifications for this shift affect more than conservative Mormons trying to win as Republicans. By not challenging the assertion that only Christians should hold office, mainstream journalists encourage bigotry against all religious minorities, including atheists. Atheists already face discrimination when it comes to running for public office. A number of states ban atheists from holding public office, even though the U.S. Constitution explicitly forbids religious tests for office. Of course, it's difficult for an atheist to win enough votes to get into office, so this conflict hasn't been tested much, although one atheist city council member found himself under fire by religious bigots who wanted to use North Carolina's ban on atheists holding office to push him out for not swearing his oath of office on the Bible.

There's a reason the Founding Fathers wrote a national constitution that forbade religious tests for office and required the separation of church and state. It's not just because protection is needed against the escalating religious bigotry we're seeing lately, but also because religion should have no place in politics in the first place. Neither atheists nor believers benefit when leaders are guided more by religious dogma than by rationality. Angels and demons might be a fine thing to worry about when you're in church on Sunday, but when you're trying to govern real people in the real world, it's far better to rely on evidence and empirical facts, interpreted through reason and not through the guesswork of faith. This is why Kennedy defended himself against questions about his faith by saying, "I believe in an America where the separation of church and state is absolute, where no Catholic prelate would tell the president (should he be Catholic) how to act, and no Protestant minister would tell his parishioners for whom to vote."

People like Robert Jeffress, when they propose religious tests for office -- even ones held privately by voters -- should face more challenges than reporters simply asking whether they consider Mormons "real" Christians. They should be confronted with Kennedy's words and asked directly why they disagree with our former president about the separation of church and state. They should be asked why they believe only a certain breed of Christians should hold office, and asked why they think it's appropriate to demand that politicians put religious dogma before evidence-based and rational approaches to policy. Anything less than that is aiding the religious right in its mission to remake our secular democracy into a theocracy. It shouldn't be tolerated.