Herman Cain's peak could be 48 hours away

A gaffe-prone accidental front-runner tackles a candidate-killing Sunday show. This should be good 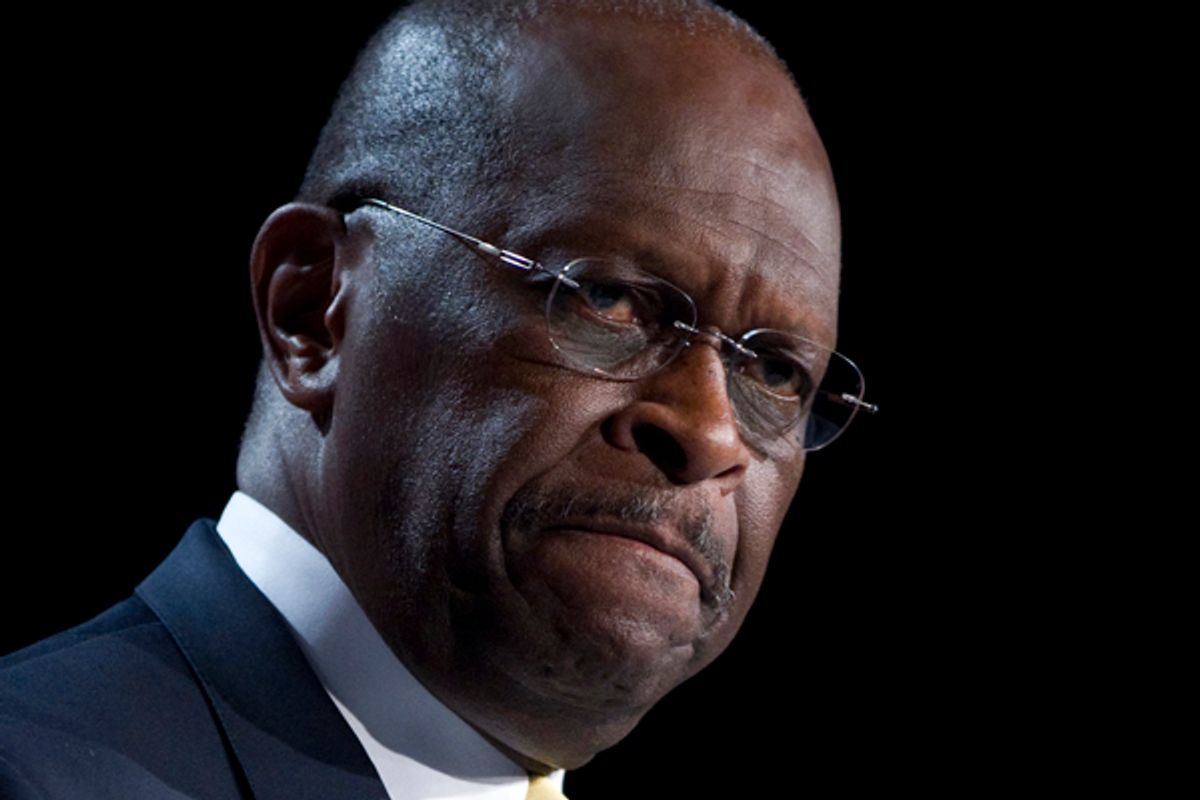 "Herman Cain is about to get his time in the bright lights and he’s got 20 days to show he can handle it," Scott Reed, a GOP strategist told Politico for a story that ran this morning. Actually, Cain may have a lot less than 20 days, because a look at this weekend's Sunday show lineup finds that he's scheduled to appear on "Meet the Press."

The former pizza chain CEO, who is now running in first place in national Republican polls (a new one released this morning put him ahead of Mitt Romney by 15 points), has certainly done his share of sit-down interviews this year, so he won't be new to the basic format. But MTP prides itself on putting presidential candidates through an unusually intense grilling, something that has caused serious problems for several previous candidates. And there's good reason to believe that Cain's grasp of many of the policy areas that David Gregory will presumably focus on is rather thin.

Several times this year, he's been caught completely off-guard by questions that should be basic for a presidential candidate. For instance, back in the spring, Fox's Chris Wallace asked Cain about the Palestinian right of return, a term with which Cain was clearly unfamiliar. After a very long, awkward pause, he finally attempted to string together a serviceable response, emphatically stating that it was something that Palestinians and Israelis would have to negotiate. Palestinians, he added, "should have a right to come back if that is a decision that Israel wants to make…. I don't think they have a big problem with people returning." Of course, this is not at all the position of Israel's right-wing government, which means it's also not the position of America's Republican Party. Only after the show did Cain become aware of this, at which point he issued a statement filled with Likud-friendly red meat that categorically rejected the right of return.

And that's just one example. Taegan Goddard has linked to a helpful compilation of Cain gaffes that almost no one noticed at the time but that could suggest he could talk himself into a lot of trouble now:

Cain might do well to ask his fellow Georgian, Newt Gingrich, for some tips. The former Speaker made his 35th appearance on MTP this past May, as he was rolling out his presidential campaign, and it didn't go well at all. As David Gregory pressed him, Gingrich ended up branding Rep. Paul Ryan's Medicare overhaul "right-wing social engineering," a characterization that infuriated conservative leaders and activists across the country:

Gingrich soon apologized to Ryan and concocted a feeble cover story, but the incident contributed to what proved to be an epically disastrous campaign launch.

And four years before Newt's appearance, there was Bill Richardson, the New Mexico governor who some believed could be a darkhorse alternative to Hillary and Obama in the 2008 Democratic race. But Richardson's May 2007 MTP appearance was a complete trainwreck. As Slate's John Dickerson described it at the time:

He seemed not too thoughtful, but too little prepared. When he tried to explain the contradictions, like his shift on the immigration bill from supporting it to opposing it, his responses were meandering. Sometimes, he contradicted himself within just a few breaths. After explaining why he changed positions on the assault-weapons ban, he broadly asserted, "I don't change my positions." And on one of his core pitch-points—his diplomatic sixth sense for the world and the Middle East in particular—he had to admit that on Iraq, the blockbuster of the day, his skill failed him. For a long-shot candidate with limited opportunities to break through as a fresh new face, he missed his chance wildly.

It may be that Richardson was never going to be a contender in 2008, given the star power of his opponents, but his painful performance on MTP made it that much harder for him to establish credibility with party leaders and donors.

As for Cain, it's often seemed like he's winging it as a candidate, tirelessly preaching the "boldness" of his 9-9-9 tax plan and trying to handle everything else on instinct. Does he know what he's getting himself into on Sunday?